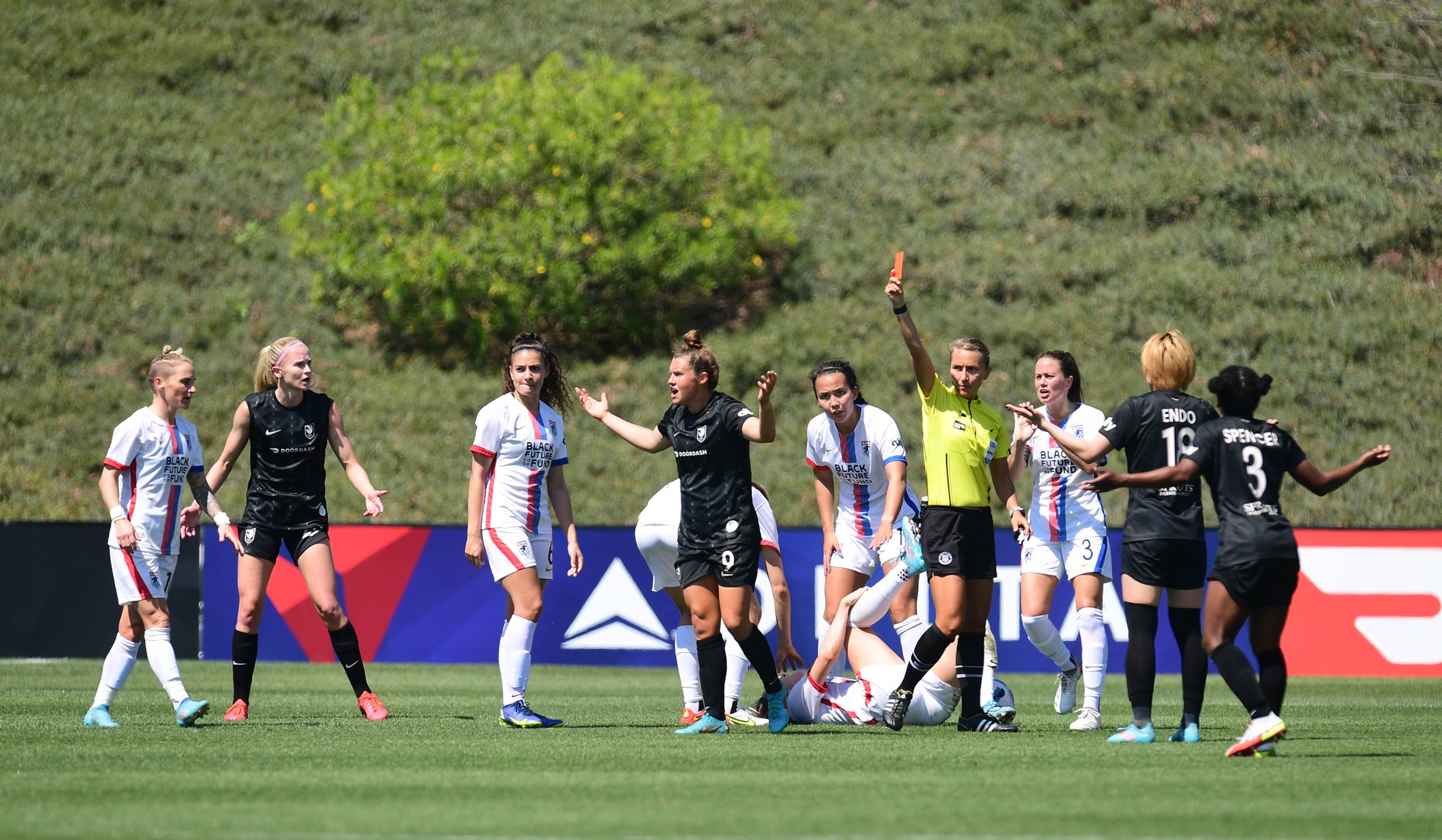 Saturday brought three more games in the NWSL Challenge Cup, including a pair of West Division clashes with each expansion team at home. Here is how things played out:

The Skinny: OL Reign jumped out to an early 2-0 lead before Angel City was reduced to 10 players in the 31st minute, when Savannah McCaskill was sent off for a dangerous tackle. Phallon Tullis-Joyce made six saves, several spectacular, in goal for the Reign.

One Key Moment: The Reign’s opening goal was a thing of beauty and the sequence ran right through the heart of Angel City, with Bethany Balcer pulling Maddison Hammond out of position and opening space up for Veronica Latsko.

Inside the Game: The visiting Reign looked comfortable from the start in midfield, and it’s no surprise that the experience of Jess Fishlock and Quinn, along with Angelina, were able to dictate the middle of the park. Dani Weatherholt was forced to drop deep and provide cover for her center backs at times, leaving more room for the Reign’s midfield to operate. Rose Lavelle also tucked in on the right side to join that Reign trio. The Reign effectively started the match in a 4-2-3-1 defensive shape, with Lavelle on the right, Latsko on the left, and Balcer as the No. 9.

Angel City head coach Freya Coombe started the same 11 players as she did in the opening-weekend draw with San Diego Wave FC, and the team’s depth issues were again a potential worry for the future. Christen Press was dangerous at times, as she was in the opener, but Sofia Huerta largely looked comfortable in the 1-v-1 battles on that flank, winning three of them in the opening 12 minutes. Reign head coach Laura Harvey said that part of the reason she put Lavelle in the wide right position was to help Huerta in defending Press (in addition to protecting Lavelle from the more physical central battles as she gets back to full fitness with her ankle). Press remains a singular threat for Angel City, but there will need to be more happening around and behind her rather than her in isolation. Coombe joked after the game that it would be great to have two Presses.

Simone Charley was a game-changer for Angel City. She came on at halftime in place of Jun Endo and caused problems for the Reign on Angel City’s right side. She tallied the assist on Tyler Lussi’s goal (after a nice 1-v-1 move from Jasmyne Spencer on the flank), and that is the partnership Coombe said she wanted to lean on in adjusting to the red card. Coombe referenced the success Lussi and Charley had together in Portland, while saying that they asked Press to drop deeper in the second half. Harvey said she was frustrated with her team’s overall performance, in part because they couldn’t bury the game with the player advantage. For the last half-hour or so – including Lussi’s goal in the 67th minute – Angel City had the better of chances.

The Skinny: Merritt Mathias’ perfectly placed penalty kick was the difference on Saturday night, as the North Carolina Courage earned three points at home over the visiting Orlando Pride.

One Key Moment: Pride captain Marta sustained an injury in the first half, in worrying scenes for Orlando fans. She went down on the field after the twenty minute mark, and appeared to have her knee assessed by medical staff, but returned to the field. Just ten minutes later, however, she sat down on the pitch for a second time and after talking with staff, was subbed out.

Inside the Game: It all went the Courage’s way for the majority of the match on Saturday in Cary, North Carolina.

Orlando’s inability to win back the ball – and keep the ball once won – isolated Pride forward Sydney Leroux up top, limiting her touches on the ball. Meanwhile, Brianna Pinto and Taylor Smith were the standouts for North Carolina in the first half. Both showcased some superior dribbling skills early, with Smith’s shimmy and nutmeg to beat two Orlando defenders the highlight in the 38th minute. But her ensuing shot was just too high, and sailed over the bar.

The Courage kept the temperature up in the second half, and were finally rewarded in the 71st minute after successive knocks on the door. Gunny Jónsdóttir was called for a handball in the area, and Mathias made no mistake with her conversion to beat keeper Erin McLeod.

Orlando had a chance to equalize late, as a volley by Mikayla Cluff was well struck but sailed just wide of the upper 90. Orlando finished the match with 7 shots (1 on goal), while the majority went the Courage’s way, with 17 shot attempts, 3 of which landed on goal.

The Courage now have two wins in Challenge Cup action and have yet to concede, while the Pride have one point from two matches.

The Skinny: The reigning Challenge Cup champions took the lead early through Sophia Smith. San Diego created some good chances but couldn’t get the ball past Abby Smith.

One Key Moment:  Not long after Portland opened the scoring, Abby Smith made this save on Alex Morgan. Had the Wave scored at that moment this game would have looked a lot different and swung momentum. Smith earned a well deserved clean sheet in this match.

Inside the Game: The Portland Thorns took control of this match from the beginning.  It was their wingbacks, in particular, that dominated the wide spaces, creating Smith’s 5th-minute goal. The Thorns are finding success with their new 3-5-2 formation that pushes the experience of Meghan Klingenberg and Natalia Kuikka up the flanks to provide service. Smith’s winning goal came from smart passing down the flank to find Kuikka with a good amount of space. Kuikka then smartly played the ball across the goal on the ground, making it more difficult for the defenders to do anything about it.

On the other side, San Diego played in the same 4-3-3 formation they used last week and again tried to play centrally and control the middle of the park. For the first 60 minutes or so, Portland did a good job of neutralizing those central spaces by pinching Klingenberg and Kuikka in, as well as an increased role defensively for midfielder Sam Coffey. But around an hour into the match, the Wave started to settle down and control possession. Most importantly, they created overloads on the flanks to outnumber Portland and find similar success to the first half. San Diego was the better side for the last 20 minutes but could not convert any chances, with the best in that stretch coming in the 81st minute, when Jody Taylor hit a close-range effort over the bar.