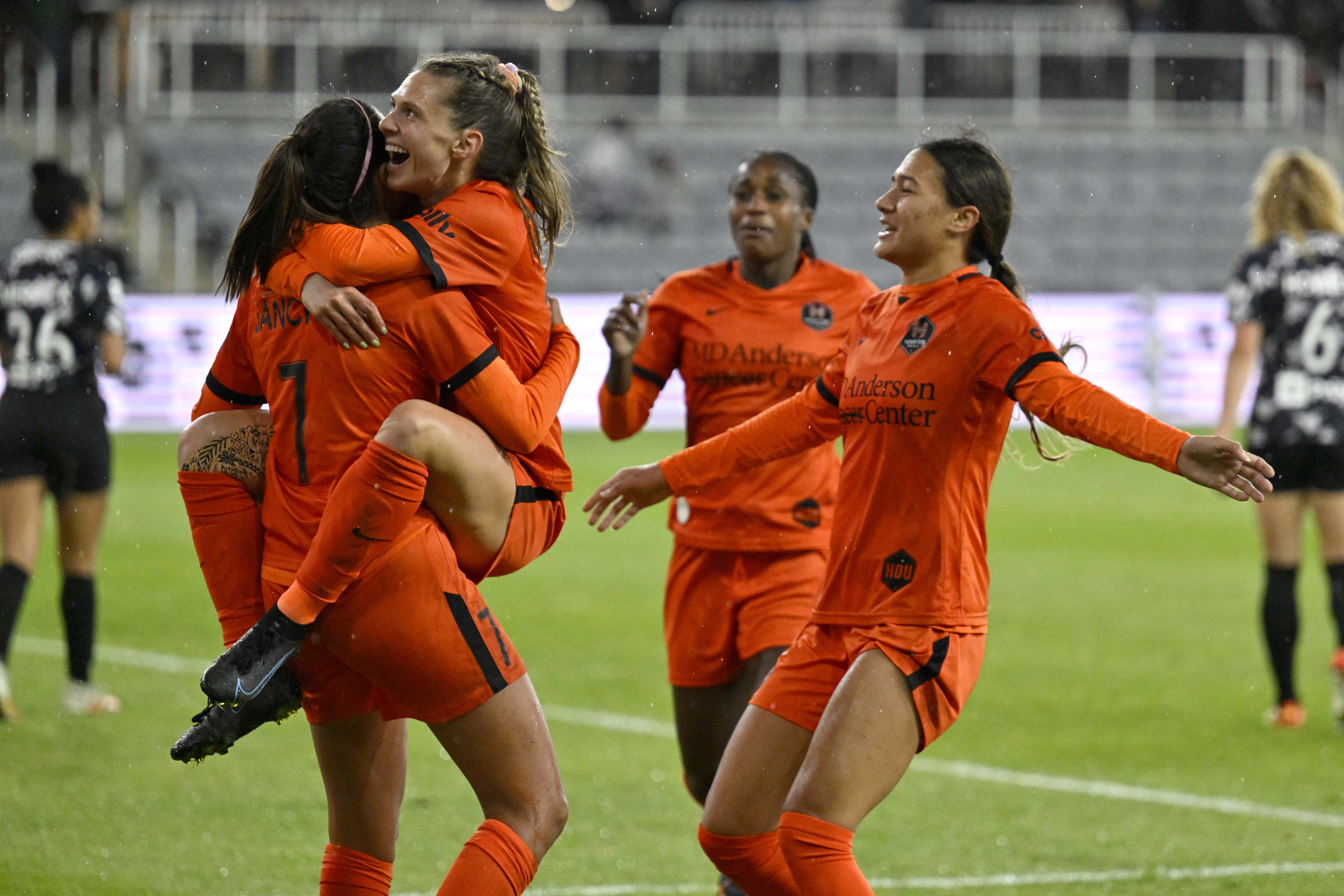 Three games on Friday, three games on Saturday for the National Women’s Soccer League as the races for top spots in the NWSL Challenge Cup heat up in each division. Friday got off to a wild start…

The Skinny: The Houston Dash, on the road, surprised Racing Louisville with three unanswered goals in the second half to top Louisville, who were ahead and controlling the match for much of the first half. Houston’s victory earns them three points and leaves Louisville scratching their heads.

One Key Moment: While Houston was on a roll in the second half, Addisyn Merrick’s handball to concede the penalty essentially set up Houston for the winner. How could you doubt Rachel Daly at the spot?

Inside the Game: It seemed to be Racing Louisville’s night the entire first half. Kirsten Davis scored her first professional goal for Racing in the 16th minute, leaping past Katie Naughton, settling the ball with her body and then firing past Jane Campbell. Meanwhile, it was Jess McDonald, the league leader in all-time assists with 27, who scored to double the lead. McDonald had to stretch her whole body to get her foot on the ball, making for an incredibly acrobatic goal.

Louisville, at home, were brimming with confidence heading into the locker room at the half. However, in the second half, the show quickly became Houston’s, as they scored three unanswered goals to take the lead. Former Tigres and Liga MX Femenil champion Maria Sanchez scored first to bring Houston within one. In the 56th minute, Sanchez scored on a rebound that rolled right in front of her.

Marisa Viggiano, who was traded to Houston this offseason from the Orlando Pride, scored her first goal in orange in the 58th minute. After some cheeky footwork from Sanchez, including a nutmeg, Viggiano got the ball in the attacking area, taking one touch and putting it past Katie Lund. Rachel Daly had the final say so — and game-winning goal — in the 65th minute. After a handball in the box from Merrick, Daly lined up her penalty kick and smoothly put it past Lund for the winner.

The Skinny: Kristie Mewis scored from the penalty spot in her Gotham debut, but Ashley Hatch equalized in the second half and held on after Amber Brooks was sent off in the 65th minute for a second yellow card.

One Key Moment: The Spirit dominated the opening 20-plus minutes, but Gotham got on the board first when Trinity Rodman fouled Margaret “Midge” Purce inside the box. Mewis stepped up to bury it from the spot.

Inside the Game: Gotham improved upon a poor opening to the Challenge Cup — a 2-0 loss in North Carolina which saw the Courage dominate from start to finish — to draw the Spirit and take a point in the first meeting between the two teams expected to set the pace in the East Division. Mewis was deployed in the No. 10 role, with McCall Zerboni joined by rookie Taryn Torres in deeper midfield roles to protect Gotham’s back four. That back four struggled at times again to build out and connect with its midfield as Washington pressed high. Gotham coach Scott Parkinson said after the game that he wants teams to press his side because they think they can find success in breaking it and getting numbers up down the field. As of yet, that is a work in progress.

Washington put in a similar performance to their opening-weekend draw with the Orlando Pride: flashes of an attack expected to dominate, but not a lot of final product. Ashley Hatch scored a very nice equalizer in the 61st minute before missing what would have been the game-winner from close range. Rodman and Ashley Sanchez were dangerous once again — and effective in the press — but are yet to get on the scoresheet for the Spirit. Washington outshot Gotham 29-8, but the full comeback was halted by Brooks’ ejections four minutes after the equalizer.

The Skinny: Kansas City won on the road for the first time in franchise history after failing to do so through the entirety of 2021 and in Louisville last week. Kristen Hamilton’s late goal secured the three points for the Current.

One Key Moment: Hamilton’s winner delivered the big result, but Hailie Mace scored a screamer to start the comeback.

Inside The Game: Chicago stuck with the 3-4-3 (more of a 3-4-2-1, the way it plays out) despite the absence of center back Tierna Davidson, who is dealing with a right knee issue, and the Red Stars looked comfortable for stretches. Vanessa DiBernardo opened the scoring in the 22nd minute when her shot took a significant deflection before sailing into the top corner. It looked inevitable that Mallory Pugh would extend that lead early in the second half. Four minutes after the break, she slalomed through the middle of the park and put a shot just over the bar. Three minutes later, her free kick from a central area 22 yards out rang off the crossbar.

Heavy rotation on both sides as the game went on effected the flow of play, but most important among the changes was Chicago head coach Chris Petrucelli swapping out both wingbacks, first bringing on Alyssa Mautz for Bianca St. Georges in the 59th minute, and then taking off Arin Wright in favor of Jillienne Aguilera in the 76th minute. St. Georges is more of a defensive option than Mautz, and Wright is the most experienced of the bunch.

Kansas City’s historic result came without Lynn Williams (right leg injury, as it was vaguely described on the injury report), and with Sam Mewis only playing the first 45 minutes again as she works her way back to full fitness. Lo’eau LaBonta has done well in the attacking midfield role thus far, and credit to the Current’s back line in this one — an area of some concern in the opener. Alexis Loera and Jenna Winebrenner kepth things organized enough against a Pugh-Yuki Nagasato combination which can give fits to much more experienced defensive tandems.