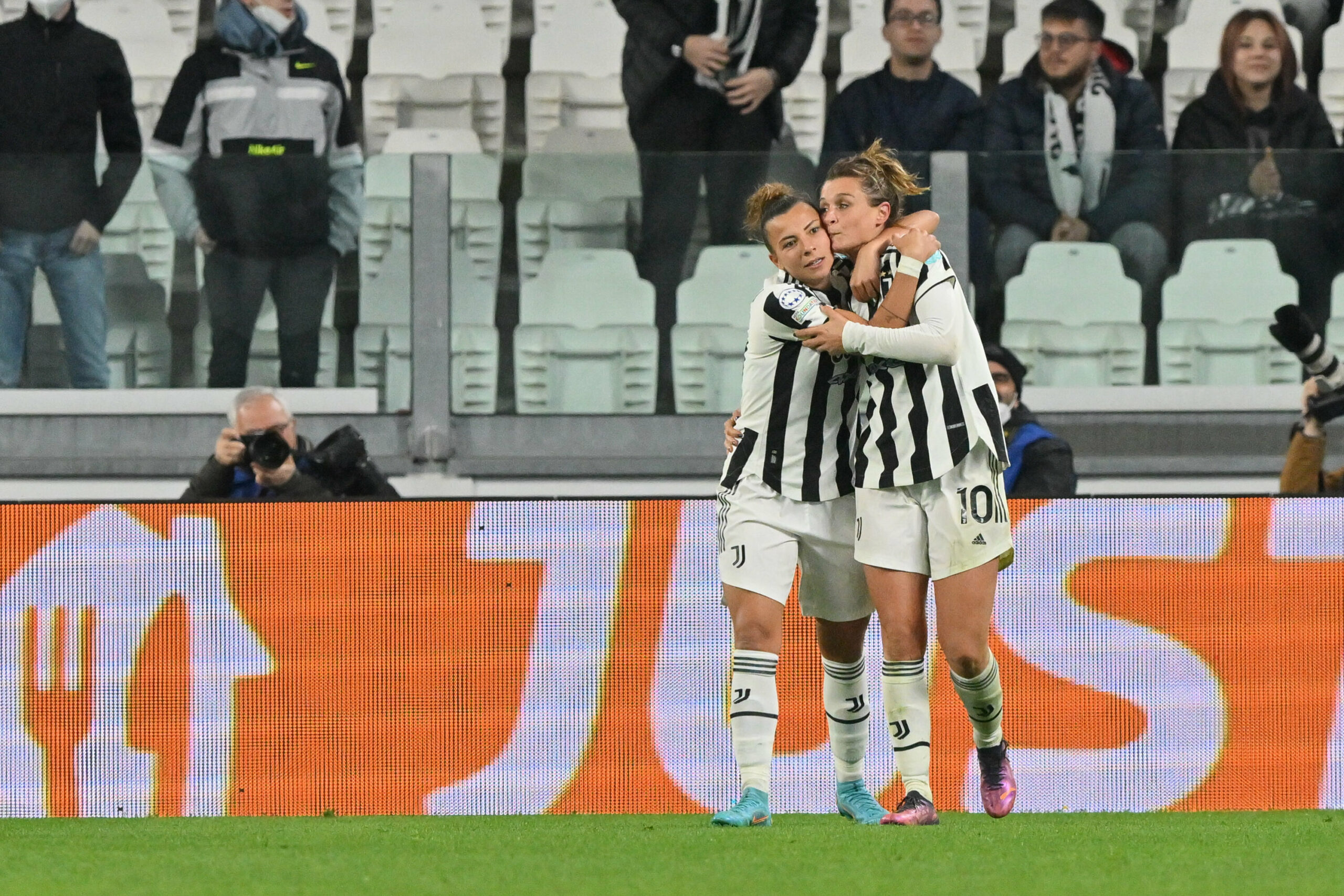 The second day of Quarterfinal action in the UEFA Women’s Champions League kicked off with Juventus hosting Olympique Lyonnais, the seven-time tournament winners, in Italy. The match was played at Allianz Stadium in Turin, where the UWCL Final will be held on May 21, with Juventus earning the 2-1 win. With the win, Juventus became the first team in the UWCL to defeat Lyon in a knockout round first leg match.

Shortly after that massive victory, Wolfsburg took on Arsenal at the Emirates Stadium. It looked like a lack of finishing would hand Arsenal the loss but a dramatic 89th minute goal earned the draw, setting up a must win second leg match.

American international Catarina Macario scored for the French visitors to silence the crowd in Turin. Macario leaped in the air in the 8th minute, edging out defender Sara Gama, to put it on frame and past Juventus goalkeeper Pauline Peyraud Magnin (who was born in Lyon). Lyon was close to earning a second goal, but a goal-line clearance save — that was confirmed by VAR — from Cristiana Girelli saved the day.

However, Lyon ran into trouble in the second half. Ellie Carpenter was given a straight red card in the 62nd minute for a foul against Lisa Boattin. Juventus took advantage of the player down for Lyon and scored two second-half goals. In the 71st minute, Girelli scored after Lyon goalkeeper Sarah Bouhaddi bobbled the ball and collided with Barbara Bonansea, releasing the ball in the attacking area.

The game-winning goal — giving Juventus the advantage ahead of Leg 2 — came from Agnese Bonfantini, as she slipped in between two defenders and slotted the ball past Bouhaddi.

Juventus has the one-goal cushion as they go into France next week. Leg 2 will be held on Thursday, March 31, at 3 PM ET.

Tabea Wassmuth came into this match as the top scorer in the UEFA Women’s Champions League this season. Twenty minutes into Wednesday’s match at Emirates Stadium, she redirected Joelle Wedemeyer’s cross into the back of the net for the opener. Against the run of play, Wassmuth cemented her spot at the top with her ninth goal in the competition. Arsenal had the majority of possession and chances but were frustrated most of the match, lacking only the finishing.

The second half kicked off with Arsenal clearly on the front foot. Blackstenius even put the ball in the back of the net in the 50th minute but it was called back for offside. Wolfsburg remained dangerous on the counterattack, hitting the post twice in the 61st minute, but were unable to double their lead. It looked like they would still prevail but Arsenal equalized in the 89th minute to set up a must-win second leg. It was the free-kick service of substitute Tobin Heath that was smashed in by center back Lotte Wubben-Moy to salvage a draw.

Arsenal and Wolfsburg are on level terms heading into Leg 2, which will be held in Germany on Thursday, March 31, at 12:45 p.m. ET.