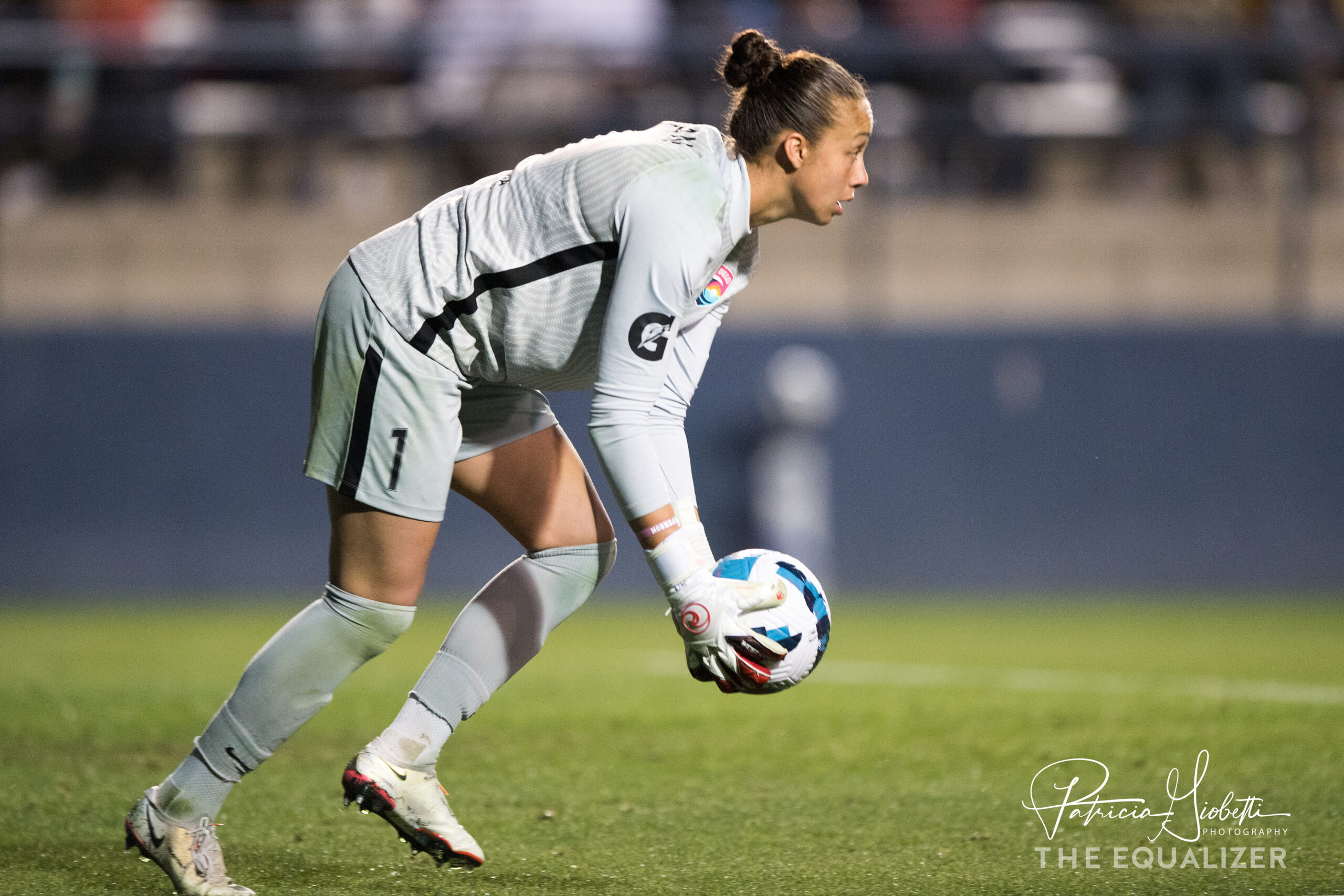 The Skinny: The first ever match for each 2022 NWSL expansion team ended in a draw at Cal State Fullerton Stadium, where Angel City is playing Challenge Cup games before debuting at the Banc of California to start the regular season.

One Key Moment: Savannah McCaskill scored the first goal in Angel City FC history, slipping between Tegan McGrady and Naomi Girma to head home a perfect cross from Ali Riley. The goal came four minutes after halftime and underscored a clear shift in momentum after San Diego dictated play in the opening 45 minutes.

Inside the Match: This game had the energy of two new teams looking to make a statement. Christen Press’ name won’t show up on the scoresheet, but she was the focal point of Angel City’s attack, as expected. She nearly scored seven minutes into the match, cutting inside on Christen Westphal to hit a right-footed shot which Kailen Sheridan got enough of a hand on to push off the crossbar. That set the tone for the night, with Press driving at Westphal throughout the match on Angel City’s left side. Press got in behind again in the 26th minute via a great through ball from McCaskill, but Sheridan was quick off her line to clear the danger. Press also dropped deep at times to collect the ball and, in the 56th minute, she did so before turning and driving at the San Diego defense before slotting Tyler Lussi in behind. Lussi hit the post for what would have been Angel City’s second goal. The Wave are expected to have one of the better organized back lines in the league — and Press ran them ragged. Sheridan, however, was spectacular all night.

Still, San Diego was the better team overall in the opening 45 minutes. McGrady pushed high up the left side and rookie Kelsey Turnbow, playing in the No. 10 role, helped set the tone for the visitors’ high pressure. Twice in the first half, San Diego baited Angel City goalkeeper DiDi Haracic into playing a dangerous square ball up the middle and Turnbow stepped in to pick the pocket of Cari Roccaro and spring an opportunity the other way. Jodie Taylor started in the No. 9 role, with Alex Morgan coming off the bench to start the second half. Morgan and Abby Dahlkemper were each on 45-minute restrictions after recovering from minor knocks in preseason.

Angel City took control in the second half by stepping into the midfield and controlling more of the game centrally. Dahlkemper’s absence was felt almost immediately, and Stoney made all five available substitutions relatively early, while Freya Coombe made only one change, in the 89th minute. Sofia Jakobsson entered the match in the 74th minute for San Diego and immediately changed the dynamics of the Wave’s attack on the left side, driving at Jasmyne Spencer, who had a solid game at fullback — hardly her most natural position.

Back line depth was a known question mark entering the game, with Sarah Gorden out for the season and Julie Ertz not expected to play. Spencer did well on that right side to deal with McGrady trying to create overloads. Vanessa Gilles was a rock, as expected, largely handling anything that came her way, including Morgan faced up for a 1-v-1 (a battle Gilles handled well in the 2021 SheBelieves Cup, too). Madison Hammond started at right center back after just arriving via trade less than two weeks ago, and Riley captained the side.

On the balance of the game, a draw was probably a just result. Kaleigh Riehl scored the equalizer in the 81st minute by chest-trapping the ball into the net on Marleen Schimmer’s corner kick. It was very much a defender’s goal for a defensive-minded team.

The Skinny: North Carolina’s Brianna Pinto opened the scoring on Saturday night against NJ/NY Gotham FC — her former team — and later, captain Abby Erceg scored a second to ensure the win for the Courage in East Division play.

One Key Moment: The Courage opener featured a classic, lofted cross from the left side from Carson Pickett. With defenders on either side of her, Pinto timed her jump perfectly to head the ball past a diving Ashlyn Harris. It was Pinto’s first professional goal in her second season in the league.

Inside the Match: The Courage put on a dominant performance on Saturday, outshooting Gotham 17-4 (with four shots landing on goal to Gotham’s one).

Despite the numerous personnel changes in the offseason, the Courage displayed their classic high-energy press, and forced Gotham turnovers left and right in the midfield. Without the likes of Allie Long (excused absence), Kristie Mewis (right thigh), and Ifeoma Onumonu (right ankle), Gotham had no answers in the attacking third, where they produced little.

Gotham will no doubt look to shore up the subpar defending that led to the two goals: the lackluster marking of Pinto on the first, and being unable to clear a cross in the second half, leaving Erceg with just enough space to finish for the insurance goal.

Although she had little to do, Katelyn Rowland stepped up well in goal for the Courage with regular starter Casey Murphy out with a right knee injury. Rowland made a beautiful, diving save at the hour mark to deny Gotham’s Paige Monaghan and keep the clean sheet. At the other end, Ashlyn Harris debuted for Gotham after an offseason move from Orlando and displayed a classic Harris reaction-save in the closing moments of the match to parry away a header by Debinha.

One Key Moment: Trinity Rodman nearly got on the board nine minutes into the match, and the entire sequence was a wonderful team effort from the Spirit. Emily Sonnett found Tara McKeown in the wide channel, and Ashley Hatch and Dorian Bailey cleared space centrally with diagonal runs which dragged the Pride out of shape. Hatch cleverly hopped over McKeown’s pass to Ashley Sanchez, who flicked the ball on to Rodman.

Inside the Game: Washington brought high pressure which gave Orlando trouble at times, and it nearly paid off early in each half. Rodman’s shot was saved in the 9th minute, and then Kelley O’Hara started the second half with a pair of opportunities in the opening minutes. O’Hara drifted inside frequently to cut onto her left foot, joining the Spirit’s high pressure at times and staying high to help in the attack.

Similarly, Marta spent most of her night in a wider right position in order to cut inside on her favored left foot. She gave Spirit left back Julia Roddar trouble at times, but the most threatening opportunity of the night from Marta came from a set piece in the 71st minute, when her left-footed free kick from 20 yards sailed wide. Meggy Dougherty Howard struck the post in the 64th minute, shortly after checking into the game.

For a young Pride team with a lot of question marks and a lack of experience, it was a positive result against a Spirit team expected to do big things this season. Orlando absorbed pressure throughout the match and mostly did so in an organized fashion. That might sound like a low bar, but that is a welcome sight in Orlando.