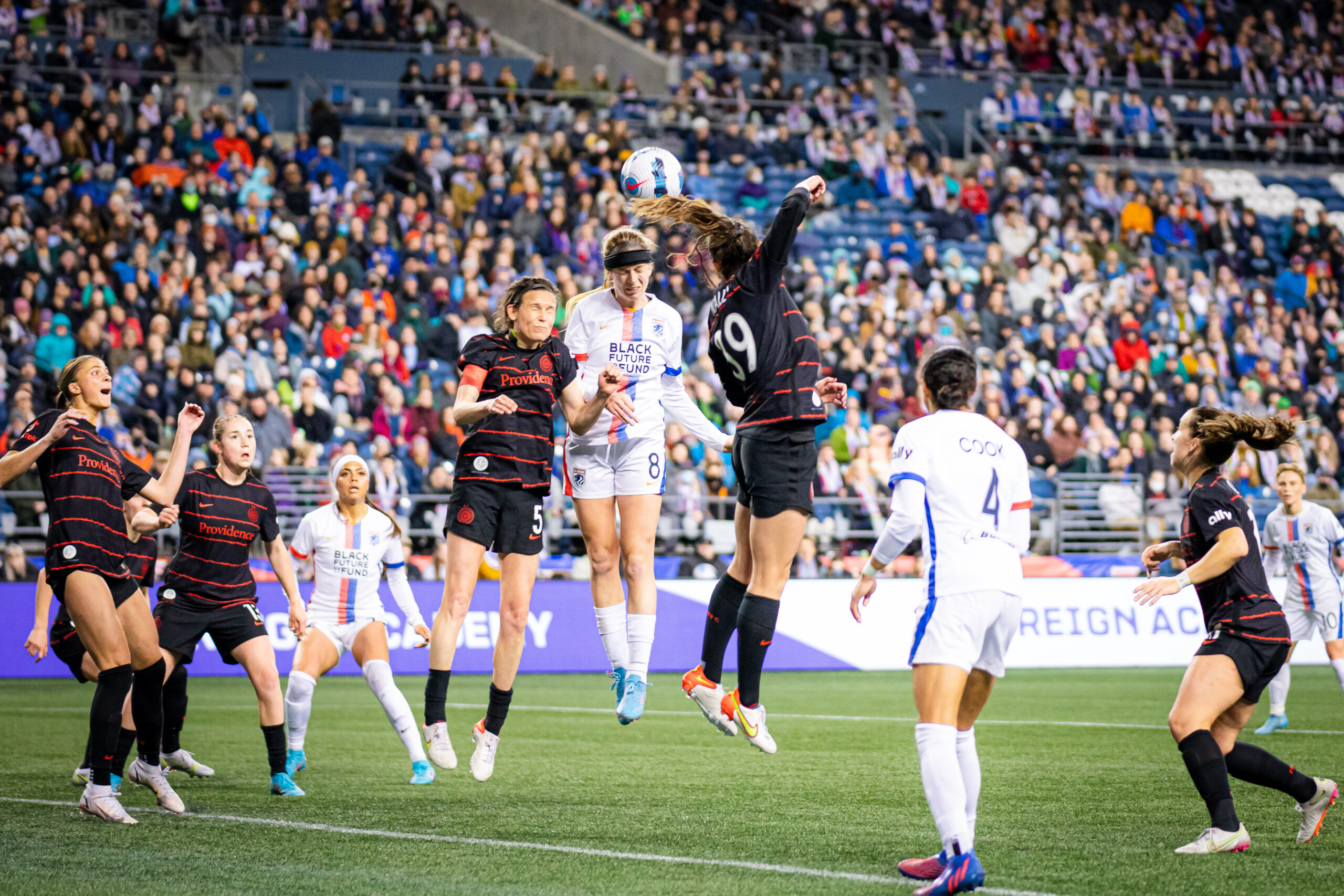 Friday brought the return of National Women’s Soccer League play with the start of the 2022 Challenge Cup, ending the shortest offseason in league history. Here’s what happened:

The Skinny: A late equalizer from the Current meant Kansas City and Louisville shared the points to open up play in the Central Division. Both teams remain winless in their brief Challenge Cup histories after each failed to win any of their four games in the 2021 edition.

One Key Moment: Cece Kizer’s 20th-minute goal was a clinical counterattack which gave Louisville the lead despite Kansas City’s early pressure. Jess McDonald provided the assist in her debut with the team.

Inside the Game: Kansas City came out with Lo’eau LaBonta playing in a false nine and flanked by Lynn Williams and Kristen Hamilton. The trio effectively put Racing Louisville under significant pressure early, but the Current as a team largely settled for shots from distance, one of which was a nice, curling effort from Williams which forced Katie Lund into a diving save, and a left-footed effort from Kristen Edmonds which rattled the crossbar. The Current out-shot Louisville 23-7 on the day but put only seven of those efforts on frame. Behind that pressure, and those shots from distance, Kansas City started Alexis Loera and rookie Jenna Winebrenner at center back. Kizer went right up the spine, through the midfield, on that goal and then easily deceived the Current’s inexperienced backs to lose her marks.

Sam Mewis played 45 minutes and wore the armband in her Kansas City debut, which saw her line up alongside Desiree Scott and Victoria Pickett in the midfield. It was only a small glimpse of what is expected to come from Mewis. The midfield at large possessed but wasn’t overly dangerous in creating opportunities, and gaps in the line were a big part of the goal conceded.

Louisville, meanwhile, played a very conservative game in its first game under head coach Kim Bjorkegren. McDonald served as the lone target up front, with Kizer and Emina Ekic dropping off just underneath her. Louisville frequently defended in a 4-5-1 shape and, although they conceded a number of shots, they mostly kept the Current to low-percentage opportunities in the first half. No. 2 draft pick Jaelin Howell started and played all 90 minutes at No. 6 in her pro debut. She struggled with her distribution and, at times, defensive responsibilities, but she was also lined up opposite Mewis and dealing with LaBonta checking down. All things considered, it was a positive pro debut for Howell.

Kansas City had ample opportunities to put this game away, including Addie McCain seeing her high-percentage shot cleared off the line moments after she struck her equalizer. As group-play starts go under new coaches, each side can take away positives from the draw.

The Skinny: Both sides came out firing in the first Cascadia clash of the season, scoring a goal apiece in the first half but unable to find the finishing touch for the second 45. They share the points in the West Division.

One Key Moment: Sofia Huerta’s goal was emblematic of how the Reign wanted to play: patient passing to find the best possible shot, finished with a well-placed rocket.

Inside the Game: The Thorns had some dangerous moments early but once the initial frenzy calmed, the midfield duo of Quinn and Jess Fishlock took hold of the match because of how Portland pressed. They controlled the tempo for the Reign, holding possession, and making smart connections. They also led a high press which put Portland’s new 3-5-2 system under considerable pressure.. Twenty minutes in, the control paid off with Huerta’s goal to open the scoring.

Just ten minutes later, the Reign back line was beaten by a ball in behind tracked down by the speedy Sophia Smith. Smith took a shot right away that was well saved by Phallon Tullis-Joyce, but the defenders were caught ball-watching, allowing Christine Sinclair to place the ball clinically in the back of the net. Sinclair played up top alongside Smith, a change from the years-long role the Thorns captain has held at the top of the midfield.

The second half was more scrappy, not particularly controlled by either team. Portland did well to disrupt what Reign had success with in the first half by tucking in wingbacks Meghan Klingenberg and Natalia Kuikka, and the Thorns tried a lot of long balls when in possession, which are often quite effective with Smith up top. One in particular, in the 77th minute, caught Tullis-Joyce out of her box with an open net, but Smith put the chance wide.

Despite the six total yellow cards (four to the Reign), Jess Fishlock said postgame that she thought this was far from the most physical Cascadia rivalry she has played in.

Equally big news of the night was OL Reign’s standalone debut at their new home, Lumen Field. An impressive crowd of 7,343 people showed up to watch the team’s long awaited full-time return to Seattle.