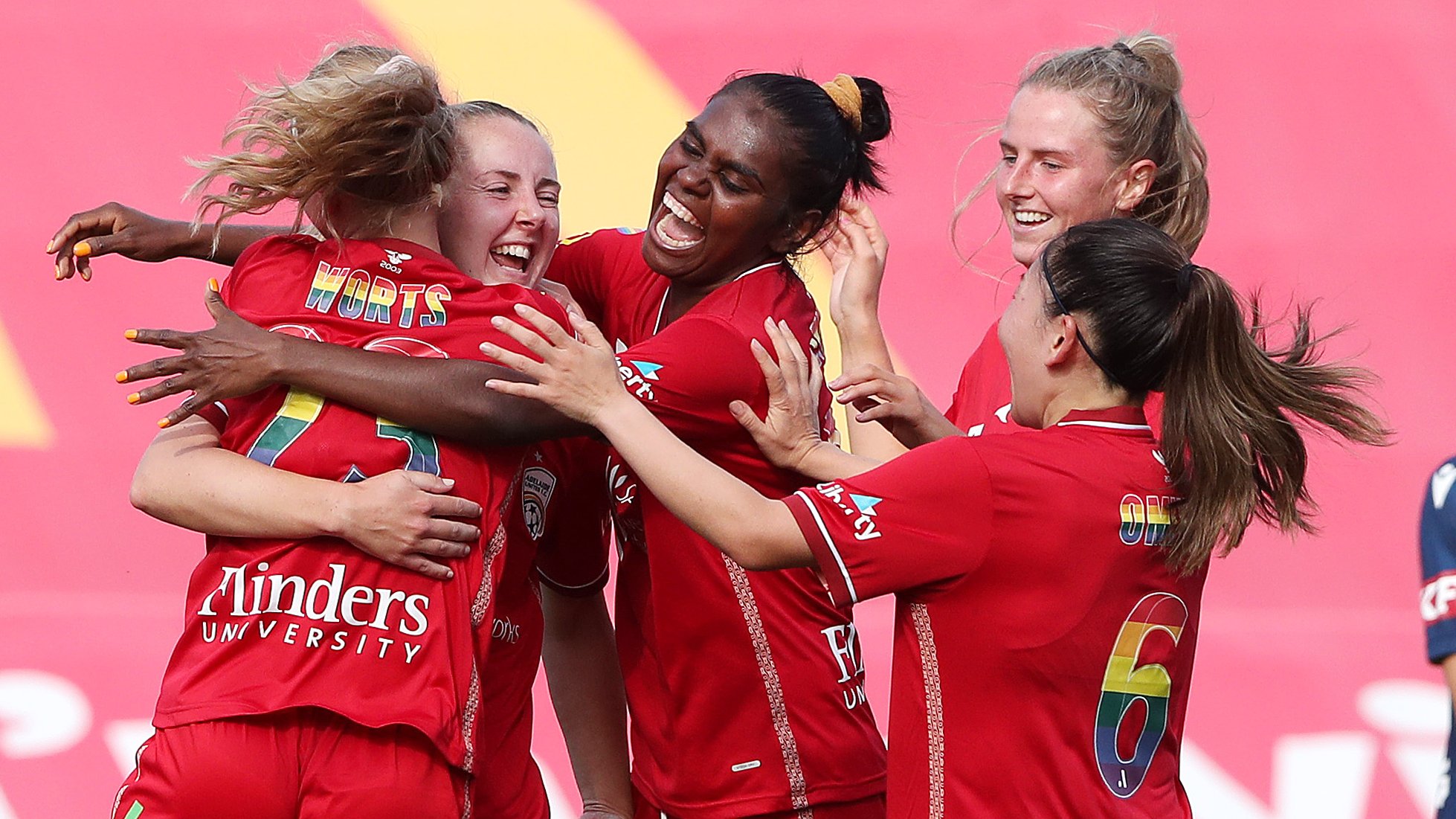 Adelaide United has been an ever present in the A-League Women (formerly the W-League) since the inaugural season in 2008-09. They have struggled mightily over many campaigns, never winning more than three games until season 11, when they finished with five wins from 12 games. That puts their first appearance in the playoffs in perspective, despite their loss this past week.

In comparison, their men’s side has won one league title — in 2016 — and appeared in two other Grand Finals, finished as runners-up in the AFC Champions League and had one appearance in the FIFA Club World Cup since 2007. The women’s team highest finish until this season was fifth on two occasions — in 2015-16 and again in 2020-21, when they missed the playoffs on a goal difference of one. Despite their overall W-L-T record to date of 43-95-24, with current head coach Adrian Stenta totaling 16 of the club’s 43 victories (37%) in just two seasons in charge, United have contributed to the growth of women’s football in South Australia and have had some notable players over the years.

Racheal Quigley — who played in 2013 with the Kansas City Shock in the WPSL and for a short time in South Korea with Hwacheon KSPO — is the all-time leading scorer with 17 goals in 66 games for the Reds, although English import Fiona Worts is second after scoring 13 goals this season, along with two last season, to total 15 goals in 23 matches.

Other former Reds alumni familiar to American followers of the game include: North Carolina Courage and New Zealand international defender Abby Erceg, who played two seasons with the club in 2011-12 and 2012-13; American international Abby Dahlkemper (San Diego Wave) with five goals in 12 matches in 2015-16; American forward Makenzy Doniak (San Diego Wave), who scored seven goals in 12 matches in 2017-18; Amber Brooks played in Adelaide in 2018-19 and 2019-20; U.S. and former Mexican international Sofia Huerta (OL Reign) had eight goals in 12 games in 2016-17; Veronica Latsko (OL Reign) had nine goals in 12 games in 2018-19; and the much loved and fondly remembered Mallory Weber (Kansas City Current), who recorded six goals in 21 matches during the 2019-20 and 2020-21 seasons.

Internationals who had appeared with Adelaide United besides the Americans include: Kristy Moore (who played international for England and Australia and spent time in the W-League with Los Angeles Strikers in 2013) scored eight goals in 27 matches across two seasons; Chile’s 2019 Women’s World Cup forward Maria Jose Rojas (now with Sydney FC and ex-University of Texas-San Antonio) in 2020-21; the Netherlands’ Maruschka Waldus in 2020-21 (ex-University of Alabama who now plays at home with PSV Eindhoven); and Norwegian international Lisa-Marie Woods, who played at Oakland University in Michigan and Middle Tennessee State and a few games for the Boston Breakers in the NWSL in 2013; Woods is now entering her fifth season as an assistant coach at Creighton University in Nebraska.

There is plenty of history in Adelaide, but success on the field has been hard to come by. This season, the mere qualification for the playoffs is a big step forward.

Melbourne City had built a 2-0 lead against host Sydney FC with a half-hour left, after a brace by New Zealand international forward Hannah Wilkinson (21’ and 58’), in the first A-League Women semifinal between the top two regular-season sides on March 11. Sydney stormed back in the last 20 minutes with a goal by second-half substitute Cortnee Vine in the 73rd minute, who didn’t start because of a calf injury from last week’s game.

As Sydney streamed forward in the closing minutes, Serbian international Tyla-Jay Vlajnic was sent off for Melbourne with a straight red card for pulling down the last attacker and then Chilean international Maria Rojas (also a sub in the 64th minute for Remy Siemsen) tied up the match in the 91st minute to send the game into a 30 minutes of extra time. Sydney advanced to the Grand Final for the fifth consecutive season with a goal by second-half substitute defender Sarah Hunter — her first of the season — and then Vine scored from a Rojas assist to extend the lead to 4-2 seven minutes from the end of overtime.

Goalkeeper Melissa Barbieri-Hudson was also sent off for City late in extra time for handling a ball outside of the penalty area and will miss the Preliminary Final, as will Vlajnic. For Melbourne City, with the addition of a Preliminary Final this season for the defeated team between the top two ranked teams, they still have a chance to make their fifth ever Grand Final. The loss to Sydney was their first post-season loss in their history; they had only surrendered two goals in eight playoff games — all ending with Grand Final victories.

Melbourne Victory forward Lia Privitelli was outstanding for Melbourne and gave her club the lead in the 29th minute with an assist from American forward Cat Zimmerman on March 13. Three minutes later Adelaide, against the run of play, tied the match through a brilliant 30-meter free kick goal by Japanese import Nanako Sasaki, which edged in off the crossbar despite Casey Dumont’s best effort to keep it out.

Melina Ayers, who only played 16 minutes this season due to an injury, started the game and scored in the 57th minute, when she was left completely unmarked as she ran into the penalty box and hit a Privitelli cross on the volley to score the ultimate winner past Reds’ keeper Annalee Grove. Ayers led the Victory last season with eight goals in 14 matches.

Melbourne Victory used their strong possession game, with Chidiac a calming and guiding influence in the middle, to finish the game as Adelaide never seemed to have an urgency that we saw in most of their regular season games.

Next week’s Preliminary Final will see the winner advance to meet Sydney FC in the Grand Final. The two Melbourne sides each won once in their regular season meeting, with Victory gaining a 2-1 win in Round 2 and City storming back to win 5-1 in Round 4, with both games in December.

Long-time Matildas midfielder Katrina Gorry powered Brisbane Roar to a 4-0 home win over Newcastle Jets on March 7, in a game postponed from Round 8. Gorry scored a goal (her fourth of the season) plus added an assist (her fifth of the season) and will move to Damallsvenskan club Vittsjo GIK in Sweden after the season. Gorry played in the NWSL with FC Kansas City and the Utah Royals. Shea Connors (her sixth), Larissa Crummer (her seventh) and a Jets own goal accounted for the other scores. It was the Roar’s second four-goal margin victory over the Jets in four days, as the New South Wales side struggled with a string of injuries and are winless in their last 10 matches, with four consecutive losses.

Michelle Heyman scored a hat trick within 20 minutes in the second half to give Canberra a 3-2 lead away to Brisbane on March 10, in a game postponed from Round 12. However, Canberra substituted starting goalkeeper Chloe Lincoln in the 89th minute to give backup Cristina Esposito her A-League debut, but Esposito’s first touch of the ball was to retrieve it out of the net as Meaghan McElligott scored her first ever A-League goal in the 90th minute to give the Roar a share of the points. Heyman finished fourth in the Golden Boot race with nine goals, scoring seven in Canberra’s last five games. The Roar finished the season unbeaten in their last four games, with 10 points out of 12, while Canberra went seven games undefeated to end the season, with five ties.