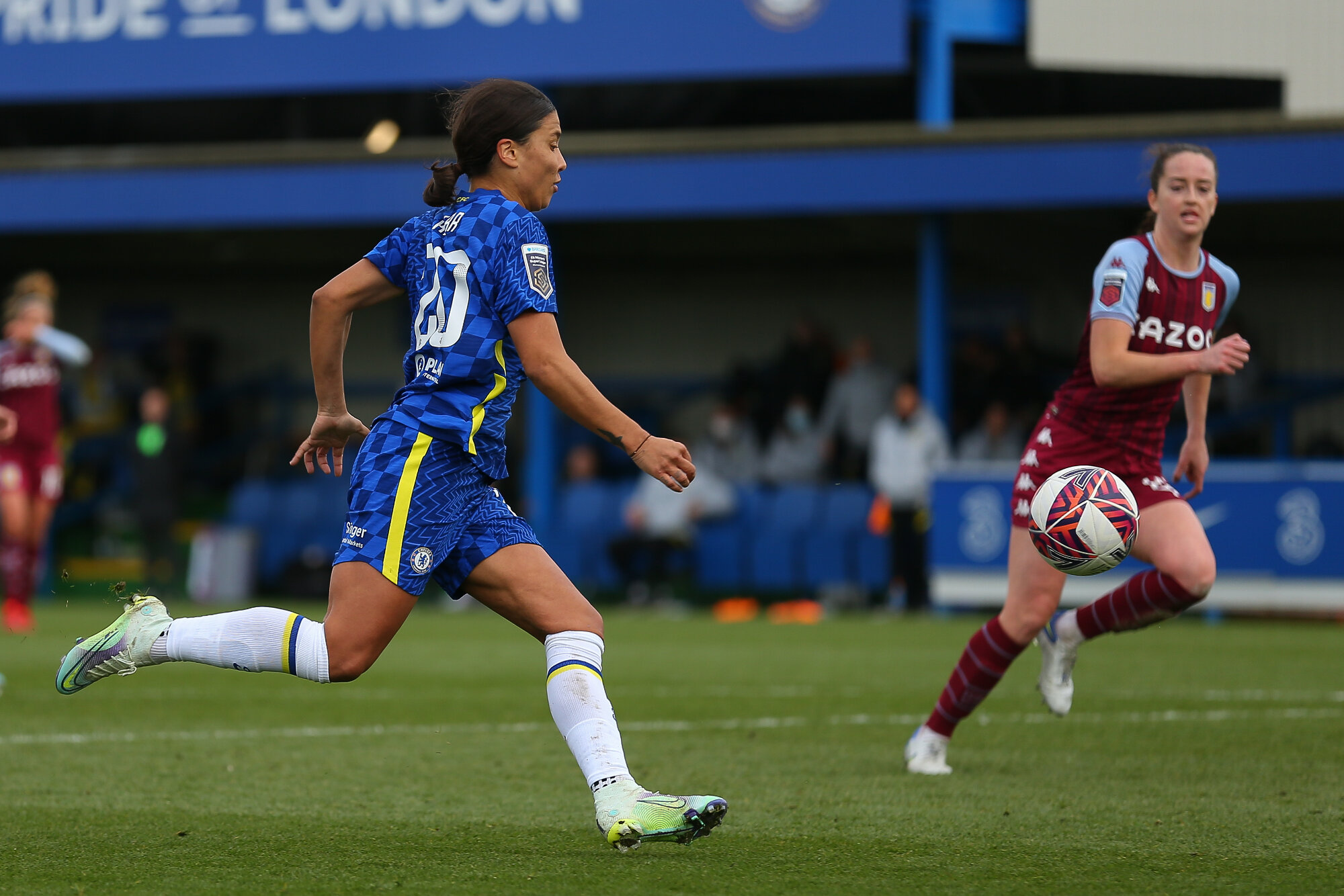 This week in the FA Women’s Super League, Chelsea made things dramatic but closed the gap on Arsenal at the top of the table, while United further cemented themselves above the green line and in the top three. Off the field, progress was made in the form of increased prize money for the FA Cup.

Chelsea left it late on Sunday against Villa. Without Fran Kirby and Pernille Harder, the match went scoreless for the full 90 minutes, and it looked as though the Blues would drop crucial points and give the edge back to Arsenal in the title race. But in added time, Sam Kerr broke through the Villa defence and emphatically got the win for her side, ensuring they are still in full control of their WSL destiny.

Chelsea piled on the pressure throughout the match. They took 22 shots, 8 of which hit the target, testing Villa keeper Hannah Hampton, who was equal to the task throughout. In particular, Hampton made a fantastic double save in the 51st minute to keep things level, first on Kerr and then on the rebound from Guro Reiten.

But a defensive lapse in the second minute of added time paved the way for Chelsea’s winner. Sent in by Chelsea keeper Zećira Mušović, the ball got through Villa’s back line and found Kerr – unmarked and rushing in on goal. Kerr made no mistake with her classy finish up and over Hampton. It was a milestone 50th goal in a Chelsea shirt for Kerr and she celebrated in style.

With Sunday and Thursday’s wins, Chelsea remain fully in control of their title destiny. They still have two games in hand and now trail Arsenal by just five points.

Historic increase to FA Cup prize money on the way — Ahead of the FA Cup quarterfinals this week, the FA announced a historic increase in prize money, starting with the 2022/23 competition. As reported by Suzy Wrack last week in the Guardian, the current prize money for the entire competition is £428,915, making next season’s £3 million pot almost a tenfold increase.

The FA’s release noted additional important details regarding the distribution of the money: “A disproportionate amount of this new fund will be invested into the early rounds of the competition. This will ensure those clubs further down the pyramid entering those rounds, really feel the benefit of the prize money earned.”

Arsenal 3, Brighton & Hove Albion 0 — Arsenal made quick work of Brighton on Sunday to secure three points. Brighton keeper Megan Walsh made some fantastic saves to keep her team in the match early, but the damn broke just before the half hour mark, and Arsenal snuck in three before the halftime whistle. Caitlin Foord assisted Stina Blackstenius on the first, Vivianne Miedema had a spectacular nutmeg assist to Beth Mead on the second, and Blackestenius completed her brace for the third.

Manchester City 1, Tottenham Hotspur 0 — Tottenham were beaten at home on Sunday for the first time this WSL season, courtesy of a scrappy goal by visitors Manchester City. Stiff defending from both sides ensured that neither had a plethora of dangerous changes in the match. Caroline Weir hit the post for City in the 54th minute on a free kick, but it was a quick counter attack ten minutes later that lead to City’s goal. A shot from Hayley Raso was saved by keeper Becky Spencer, but the rebound couldn’t be cleared by the Spurs defenders in the six-yard-box and was finished by Weir.

West Ham United 1, Birmingham City 0 — A fantastic volley from Adriana Leon gave West Ham the 1-nil win over Birmingham on Sunday. It was Leon’s first goal for the club since returning from an extended injury spell, as Leon had surgery to repair a foot fracture in November.

Manchester United 3, Reading 1 — Saturday’s clash between United and Reading featured four first half goals. United’s Leah Galton opened the scoring just minutes in, but Deanne Rose managed to equalize for Reading. But Galton would put United ahead again to complete her brace, and Alessia Russo continued her impressive run of form with an insurance goal for the Red Devils just before the halftime whistle.

Everton 3, Leicester City 2 — It was a back and forth affair on Saturday at Walton Hall Park between Everton and visitors Leicester. Leicester opened the scoring early through Jemma Purfield, but Everton’s Toni Duggan equalized at the 30 minute mark. Both teams snuck in a goal before the halftime break, keeping things level, but Anna Anvegård scored the winner – her second of the match – with a back of the foot flick over Leicester keeper Sophie Harris.

Chelsea 4, West Ham United 1 — Chelsea continued their climb to the top in midweek action and dispatched of West Ham by a 4-1 margin on Thursday. A brace from Pernille Harder, and goals by Niamh Charles and Sam Kerr sealed the three points.

Chelsea need to figure out how to chase games if they are to reclaim FAWSL title
A-League Women: Adelaide United makes history with their first playoff appearance