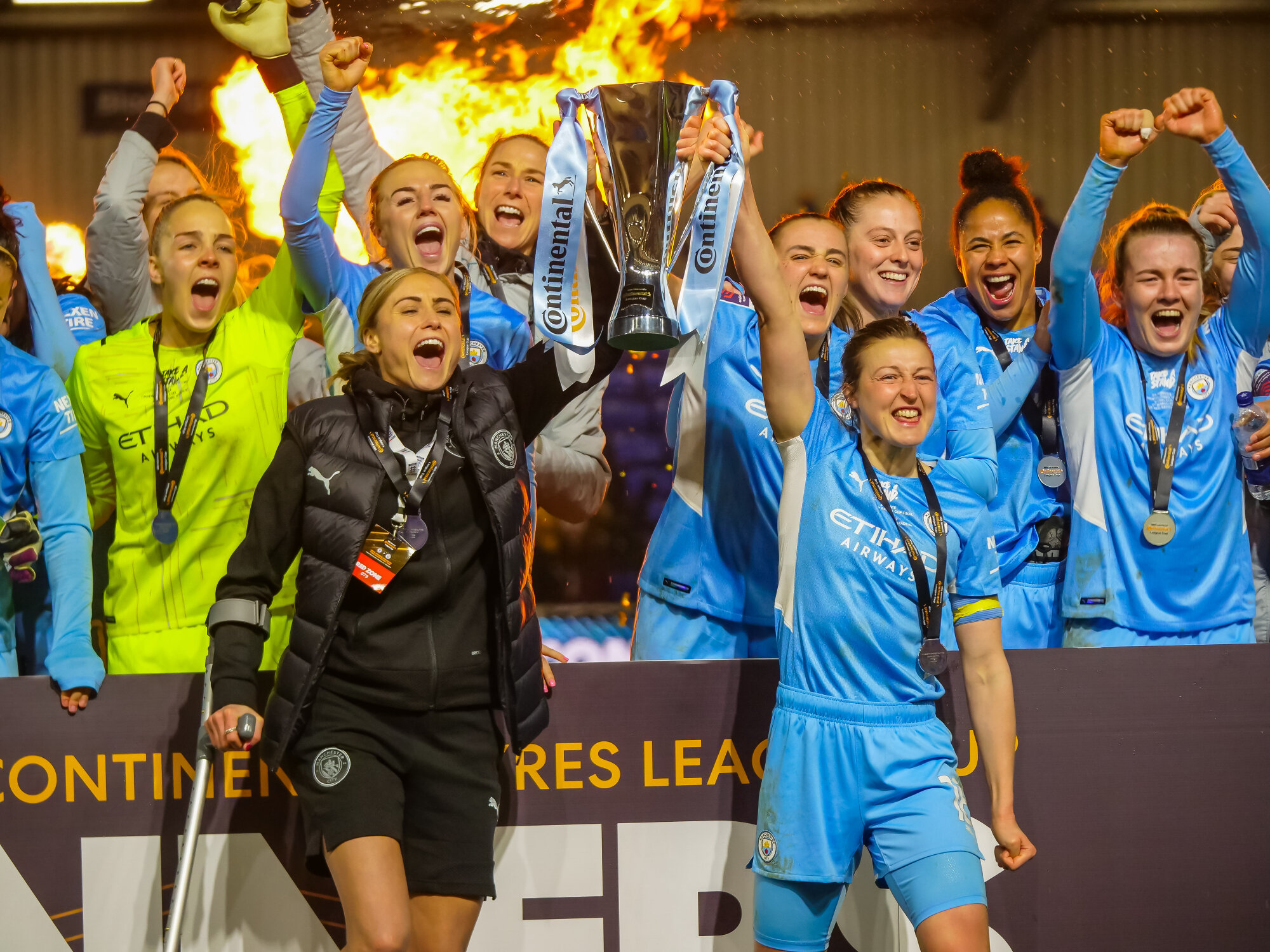 The first trophy of the season was handed out on Saturday in England, as City defeated Chelsea to lift the Continental League Cup. Meanwhile in the league, Arsenal had a six point week, and Manchester United leapfrogged Tottenham into the top three on goal differential.

The biggest match of the week wasn’t in the league, but rather was the Conti Cup final on Saturday, where Manchester City made a resounding second half comeback to steal the trophy from defending champions Chelsea.

It was City who had an early, dangerous chance on goal when Lauren Hemp got in between the Chelsea defenders and narrowly missed finishing a cross from Georgia Stanway, hitting the post instead.

But Chelsea was rewarded for their high press in the first half. In the 34th minute, they won the ball back from City down the left flank, and Guro Reiten sent in a high cross that wasn’t dealt with by City’s defenders. The rebound fell to Sam Kerr, who finished on the turn with a no-look shot.

Though Chelsea struck first, they didn’t hold their lead for long. A beautiful through ball by Stanway managed to find Caroline Weir alone near the penalty spot just minutes after the halftime break. Weir took one touch and made no mistake with her finish.

The equalizer turned the match on its head, as the momentum shifted almost entirely in City’s favour. City went ahead ten minutes later when Ellen White was in the right place at the right time to tap in the rebound on a shot from Hemp.

And it was Weir who added a third before the 70th minute mark, completing City’s second half scoring spree. Stanway sent in the delivery – this time on a corner kick – and after a few headers in the box, the ball fell to Weir – once again unmarked on the penalty spot. Keeper Ann-Katrin Berger had no chance on Weir’s superb volley.

Injury news – City captain Steph Houghton underwent successful achilles surgery in February and is set for another rehab spell. City manager Gareth Taylor told Rich Laverty that she is “very unlikely” to be ready to play again this season for City. Meanwhile, Leicester’s Jess Sigsworth unfortunately suffered an ACL injury in training in late February and will also be out for the remainder of the season.

Miedema makes history (again!) – Vivianne Miedema – already the WSL’s all time leading scorer – set another record on Sunday, when she became the first player to reach 100 “goal contributions.” The milestone is a culmination of her record 70 goals and her 30 assists. Not impressed yet? Take this in: she reached the milestone in just 83 WSL games!

Arsenal 4, Birmingham City 2 – Despite a late comeback attempt from Birimingham, Arsenal secured the 4-2 victory on Sunday, extending their lead at the top of the WSL table (for now!) to 8 points, though Chelsea has three games in hand. Up 3-0 after 70 minutes, two quick goals from Birmingham – courtesy of Libby Smith and Lucy Quinn – gave the Gunners a scare, but a late Caitlin Foord goal (with a beautiful assist by Lia Wälti) gave the home team some breathing room.

Reading 0, Tottenham Hotspur 0 – The points were shared on Sunday between Reading and Spurs. Though both teams asked questions in the attacking third, it was Spurs who came closest to scoring, when an awkward bounce in the goal area went over Reading keeper Grace Moloney’s head, and a goal-line clearance was required to keep the ball out.

Brighton & Hove Albion 1, Aston Villa 0 – Villa suffered their second loss of the week on Saturday against Brighton. Kayleigh Green put a header in the back of the net early for Brighton, but she was narrowly called offside. But Brighton didn’t take long to strike again, as a superb half volley by Maya Le Tissier beat Villa keeper Hannah Hampton before the half hour mark.

Everton 1, Aston Villa 0 – A lovely through ball from Hanna Bennison set up Everton’s winner on Wednesday over Aston Villa. Bennison’s assist slipped past the Villa defenders and found Italian international Aurora Galli, who controlled well and found the back of the net.

From titans to newcomers, the 2022 Africa Women Cup of Nations field is set
Melbourne Victory squeak into playoffs after half-season sprint of rescheduled games