From titans to newcomers, the 2022 Africa Women Cup of Nations field is set 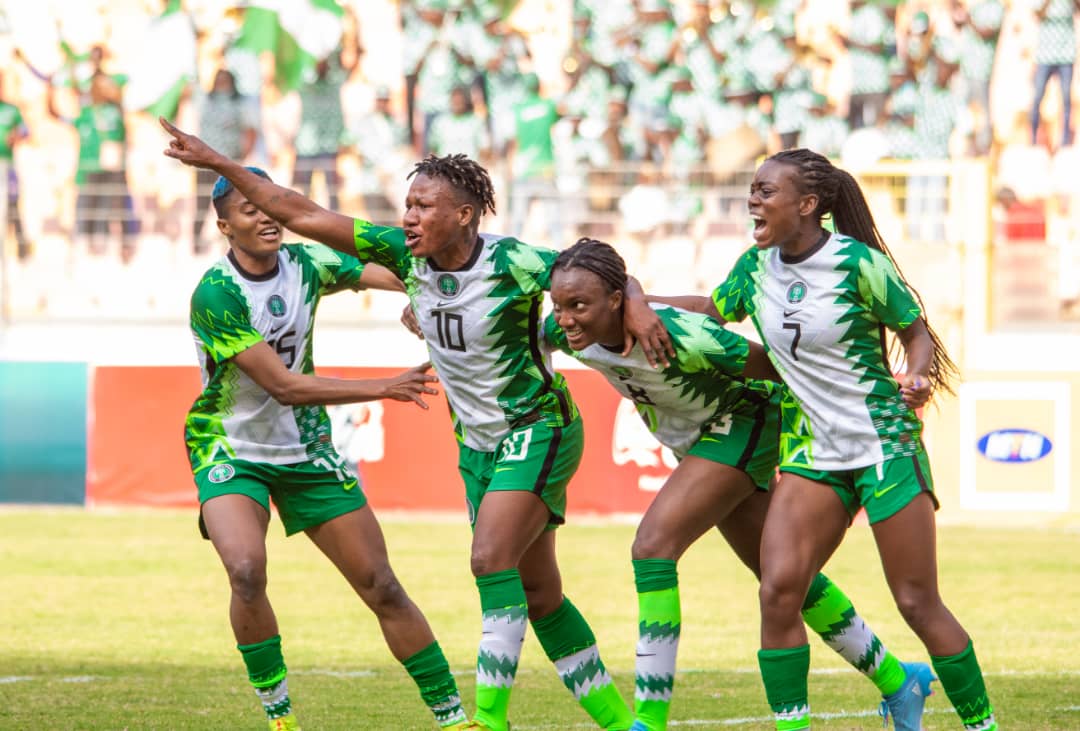 The second round of the Women’s African Cup of Nations (WAFCON) qualifying recently concluded, and it brought an interesting series of matches that captured all the raw and ecstatic emotions of Burundi, Botswana, Burkina Faso, and Togo – each of which will make its debut in the final tournament in July.

Nigeria, South Africa, and Cameroon continued their unblemished qualification record and booked their places in the final tournament, which will be held in Morocco.

The shift and development in African women’s football is on an upward curve. Looking at the results that churned out, the narrative of the underdog in African Women’s football is becoming antiquated. Although this qualifying round was tainted with withdrawals of some countries as is in most previous editions, the games were all riveting and nerve-wracking.

Eleven teams qualified to join host Morrocco for the highly coveted WAFCON trophy. Nigeria holds the record as the most titles (11) in the tournament and is relishing the possibility of clinching a 12th title this year. Countries like South Africa and Cameroon are second favorites to win it. The WAFCON will also serve as a qualifier for the 2023 FIFA Women’s World Cup and the four semifinalists will gain automatic qualification into the global showpiece.

Africa is a continent built heavily on the patriarchal system and the rippling effects trickled down to women in sports. Ever since women’s football gained traction in the early ‘90s, only a few African nations were open to the idea of women playing football. This was back in 1991, when the first-ever Nations cup was held.

Over the years, other African countries became more open to the idea when they saw how exponentially the game had grown. One way CAF ensured the longevity and development of African women’s football was by organizing the continental showpiece biennially. Many countries have to tussle and battle it out to secure a berth in the 12-nation tournament.

That was the aim of this year’s debutants: Burundi, Togo, Burkina Faso, and Botswana.

The fans of Botswana were ecstatic after their nation secured qualification to the final round of WAFCON. For a country that has been knocking on the doors of the WAFCON since 2002, they proved quite a point during the qualifiers. They trampled over Angola by a convincing 7-1 scoreline on aggregate. The second round proved to be a difficult task for Batswana. Although they beat Zimbabwe in the first leg, the Mighty Warriors gave them a run for their money in the second leg. The away goal rule was applied and Bostwana booked their qualification ticket to the final round after it all ended in a 3-3 scoreline.

Burkina Faso and Togo also joined the debutant caravan en route to Morroco. Togo’s women’s team has never previously qualified for any international tournament and is currently unranked by FIFA. But with their resounding victories against Sao Tome and Principe, and Gabon, the West Africans have set a positive trajectory for the future of women’s football in Togo. It is worth noting that this was their first African Cup of Nations qualifiers and they secured their qualification after five consecutive withdrawals since 2010.

Their West African neighbors in the north, Burkina Faso, also secured a qualification spot after three tries since 2014. They defeated Benin and Guinea Bissau by 5-2 and 7-0 aggregate scores, respectively.

Burundi also pulled a stunner. They are one of the youngest squads in the history of the WAFCON. They didn’t have an official squad till 2009 and this qualifier was also their first time reaching this stage. They netted 17 goals in the first and second round after seeing off Eritrea and Djibouti. Another pioneering feat for their country in Women’s football.

The Taranga Lionesses of Senegal have had an intermittent showing at the continental showpiece. They qualified for the tournament in 1991 but withdrew together with four other African countries. They didn’t appear in the competition until 2012, when they lost all three of their matches in the group stage. This year, they set their eyes on Morocco and overcame the hurdles Liberia and Mali posed. Defeating Liberia happened smoothly: 8-1 on aggregate. Mali, on the other hand, were favorites to advance but Senegal pulled an upset and bagged a win in the first leg. The Malians made sure to work harder to cancel out the deficit in the return leg.  A penalty shootout was the only option left to decide who advanced. The Malians have to sit this WAFCON out after their impressive record in the competition.

The Carthage Eagles of Tunisia also guaranteed their place in the competition after beating their North African Rivals, Egypt 7-2 on aggregate in the first round. They went on to thrash Equatorial Guinea 7-3 on aggregate. This qualification ended their 14-year absence from the tournament. They had a poor showing at the 2008 WAFCON, where they bowed out in the group stage.

Nigeria’s marquee player, Asisat Oshoala, sustained an injury that will see her sidelined for 10 weeks. This was confirmed by her club, Barcelona. She picked up an injury during a training session with the Super Falcons. Now, she has to race with time to recover before the WAFCON in July.

In November 2021, Oshoala tore her cruciate ligament in a Champions League match against Hoffenheim. This sidelined her for two months; she just returned to playing in January and now her hopes of leading Nigeria to the WAFCON hang in the balance.

The Super Falcons secured qualification after defeating Ivory Coast 3-0 on aggregate. Ifeoma Onumonu of NJ/NY Gotham FC netted a brace in the first leg played at Abuja. Esther Okoronkwo’s late winner in the second leg dashed all hopes of the Ivorians away.

The Harambee Starlets of Kenya were withdrawn against their will from the qualifiers. This was due to a political crisis between the Football Kenya Federation (FKF) and the Kenyan government.  FIFPRO and the Kenya Footballers Welfare Association (KEFWA) sent a letter to FIFA and CAF to rescind their decision on disqualifying Kenya but it was met with rejection. This has left the players completely dejected with their hopes and dreams crashed. The Harambee Starlets defeated South Sudan 15-1 on aggregate in the first round of qualifiers. They were set to meet Uganda in the second round. Following their withdrawal, CAF handed Uganda a place in the final tournament. This will be Uganda’s first time participating in 22 years.

The withdrawal of teams from the tournament has been a common issue since its inception in 1991. This will be something to watch – and it is an issue that needs to be scrutinized, as it is counterproductive to the development of African women’s football.