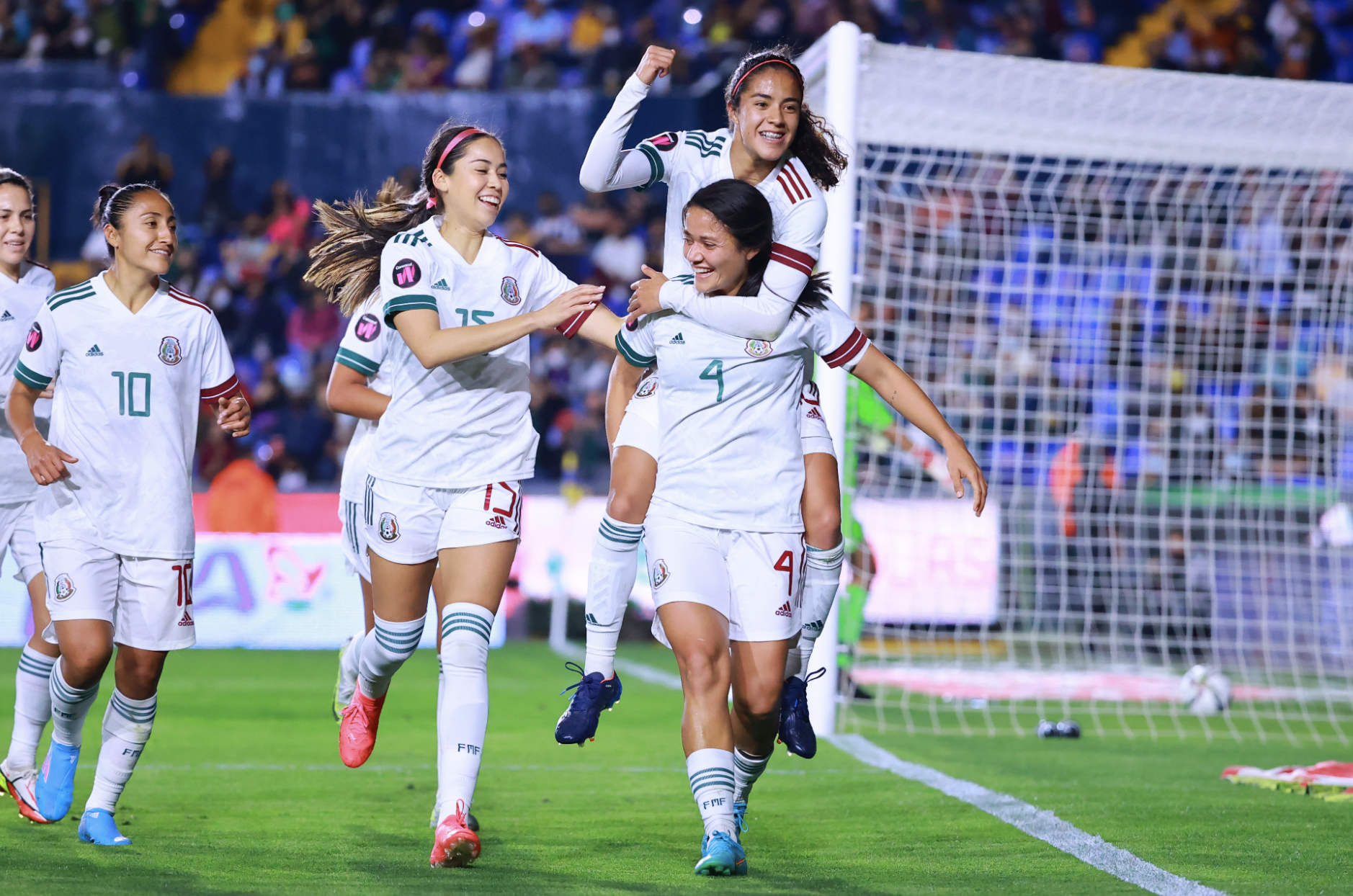 The Concacaf W Qualifiers have kicked off. The newly revamped tournament for Concacaf is giving teams plenty of competition within their confederation. There are 30 senior women’s national teams competing in the first slew of qualification. Among those 30 teams are Mexico, Costa Rica and Jamaica.

The United States and Canada are not involved in the first round of qualifying, due to their high ranking by FIFA. The two sides received an automatic pass to the Concacaf W Championship, which will take place in July in Monterrey, Mexico.

Thirty teams were split into six groups, with the top-ranked teams being sent into different sections. The first-place teams from each group will advance to the Concacaf W Championship with the U.S. and Canada, which is where qualification for the 2023 FIFA Women’s World Cup and 2024 Summer Olympics in Beijing will happen.

Two matches have been played in each group, and another two will commence during the April 2022 FIFA window. At the end of these last two matches, the first place team in each group is as followed: Mexico (Group A), Guatemala (Group B), the Dominican Republic (Group C), Panama (Group D), Cuba (Group E) and Guyana (Group F).

Let’s take a look at the action from each group and preview the April window.

Mexico didn’t hold out against Suriname and Antigua and Barbuda in the recent international window. Monica Vergara admitted that she couldn’t scout too much on Suriname due to the lack of video available. However, despite a forced un-preparation, Mexico didn’t falter and defeated Suriname, 9-0, at El Volcan, the home of Tigres. A few days later, Mexico put up eight goals against Antigua and Barbuda, recording another clean sheet victory. Mexico is in good standing in qualification, and the +17 goal differential is a good cushion.

Stephany Mayor and defender Rebeca Bernal were recognized for their efforts with spots on the Concacaf W Qualifiers Best XI. Mayor scored once against Suriname and twice against Antigua and Barbuda, notching a handful of assists, too. Bernal scored a goal apiece in both matches.

Puerto Rico sits behind Mexico after posting a big 9-0 victory over Anguilla in the second matchday. After their thrashing by Mexico, Suriname did pick up three points with a win over Anguilla.

What’s Next? Those top two teams will face off April 12, the final matchday of this round of qualification. Mexico will face Anguilla beforehand on April 9, and if Puerto Rico can put up nine goals against Anguilla, imagine what Mexico will do.

Costa Rican fans shouldn’t fret too much seeing their team in second place. Guatemala, the first-place team, had a lot of help from a huge 9-0 victory over the U.S. Virgin Islands and a 6-0 win over Curacao. Costa Rica put up big victories as well, but it was their 7-0 victory over St. Kitts and Nevis that produced a bit of controversy.

In the 96th minute, the referee whistled for a penalty kick. This was after only four minutes of stoppage time was put on the board. Instead of ending the match, Katherine Alvarado was given the opportunity to step up to the penalty spot, burying her goal for Costa Rica’s seventh tally.

What’s Next? Costa Rica and Guatemala is the prime match up in this group, with that clash coming on April 12. Beforehand, Guatemala will take on St. Kitts and Nevis, while Costa Rica faces Curacao. In their April 12 match, Costa Rica will host.

Jamaica did earn a clean sheet against Bermuda, in a 4-0 win. However, in their second match against Grenada, Jamaica gave up a goal, but still posted a 6-1 win. In their first match, Jamaica took a few knocks, but it was Khadija “Bunny” Shaw — another member of the qualifiers Best XI — with a brace, along with Trudi Carter (who fired a rocket past Micah Pond) and Jody Brown (who picked up on a goalkeeper error).

Panama and El Salvador are neck-and-neck at the top of Group D. Panama has the slight advantage over El Salvador by just one point on goal differential. Both teams sit with six points, but it’s Panama’s 13 goals that have the nod over El Salvador’s 12 goals. Barbados has three points after taking down Aruba, 3-1. Mara Rodríguez and Yoselyn López are the players to watch for El Salvador, with both recording hat tricks during the window.

What’s Next? Panama made headlines with the goalkeeping play of Yenith Bailey, and they’ll need her experience in goal against a tough El Salvador team. Both teams have shown they can score against their lesser-ranked opponents, but against each other on April 12, it could be a low-scoring affair. Carina Baltrip, one of the mainstays on defense for Panama, was recognized in the Concacaf W Qualifiers Best XI for her defense. El Salvador will have trouble getting past her and Bailey.

Group E is where we may see a surprise and a first-time team in the Concacaf W Championship. Right now, Cuba and Haiti are in first place with six points each. Cuban goalkeeper Alianna Matamoro was recognized between all goalkeepers for the 30 teams as the best in the first two qualifying matches. Cuba also had another player recognized on the Best XI list: Yeranys Lee, a forward with six goals against the British Virgin Islands (and one against Saint Vincent and the Grenadines.

Haiti is led by two players on the Best XI list: forward Roselord Borgella and defender Jennyfer Limage. Borgella scored four goals against Saint Vincent and the Grenadines and one goal against Honduras.

What’s Next? Haiti and Cuba is the marquee match in this group, as both teams have six points. In fact, both are tied on goal differential too. Haiti has a much more favorable first match in the April window, taking on the British Virgin Islands while Cuba has Honduras (Honduras went for one loss, one win in February’s window). Haiti and Cuba will then meet on April 12 in Haiti.

Believe it or not, Nicaragua is not on top in this group. Nicaragua made headlines with a ginormous 19-0 victory over Turks and Caicos Islands. That’s not a typo: 19 goals! Yessenia Flores scored six goals in that huge victory, and 11 other players got on the scoresheet. The team on top of the board, Guyana, also featured against Turks and Caicos, putting up seven goals.

Regarding the top two teams with six points, Guyana defeated Turks and Caicos, along with a 4-0 victory over Dominica. Meanwhile, Trinidad and Tobago held off Nicaragua with a 2-1 victory and then went on the road to win 2-0 to Dominica. Those aren’t big scorelines and their goal differential isn’t that big. If Nicaragua finds a way to beat Guyana and Dominica, they could very well take the top spot.

What’s Next? The top two teams will face off on April 12, but it’s the matches beforehand that will be ones to watch. Nicaragua could surprise with a win over Guyana. And, Trinidad and Tobago hosts Turks and Caicos. There’s a lot of math for this group, but any three of those top teams could clinch that last spot. If it comes down to goal differential, Nicaragua is in the lead with +18.

For a full listing of the standings, please click here for tables, goal differentials and more!