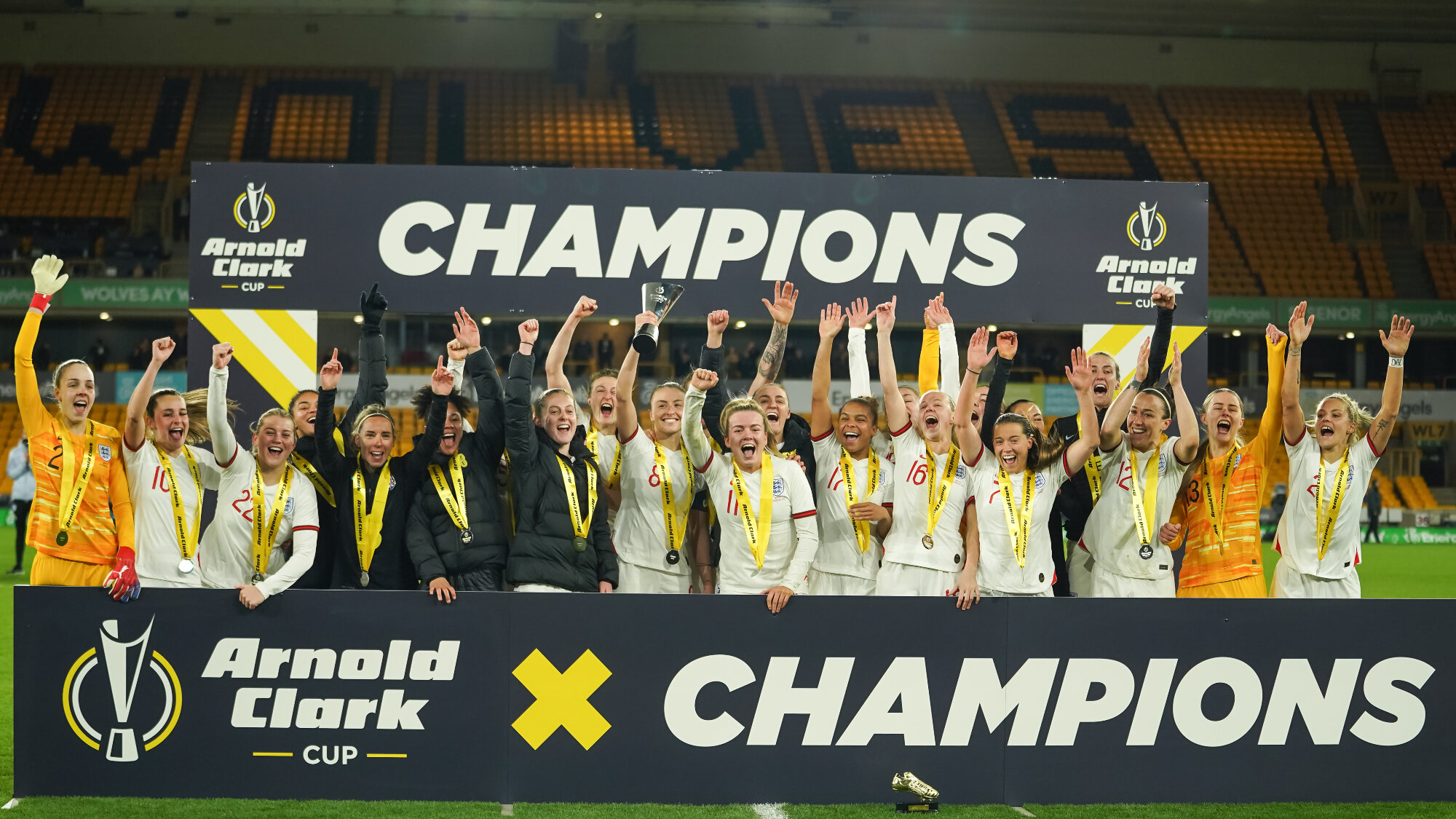 England defeated Germany 3-1 on Wednesday to lift the first ever Arnold Clark Cup. Three different goal scorers saw the Lionesses to victory at Molineux Stadium in Wolverhampton (their first ever win over Germany at home), while earlier in the day, a goal by Alexia Putellas earned Spain the win over Canada. Catch up on the final day of the tournament below!

The Skinny: The Lionesses got on the scoresheet early on Wednesday, when a nice through ball from Fran Kirby found Ellen White in the space between Germany’s defenders. In front of goal with only keeper Merle Frohms to beat, White made no mistake with her finish.

But Germany managed to equalize before the halftime break through a superb free kick from Lina Magull. The Bayern Munich captain left the Lionesses with their jaws on the floor when her strike hit the underside of the bar and dropped in past keeper Ellie Roebuck.

While the first half was a lively affair, the tempo of the match slowed after the halftime break. But in the 82nd minute, England coach Sarina Wiegman made a curious decision. After some substitutions to get Alessia Russo and Ella Toone into the match, Weigman decided to move Millie Bright from centre back to forward.

With England pushing for a winner (they needed to win the match to lift the tournament trophy), the move seemed to pay off. After a great run into the box by Lauren Hemp, Bright was at the right place at the right time to knock home the rebound to Hemp’s shot.

But, upon closer inspection, the centre-back-turned-centre-forward looked to be quite offside on the goal. With no VAR, the go-ahead goal stood. (Skip to 0:40 of the highlight below to see the correct angle.)

But the drama wasn’t done here. With Germany pushing for an equalizer, they were badly exposed on the counter in stoppage time when Kirby picked up the ball on the halfway line and dribbled all the way to goal. The Chelsea striker made no mistake in beating Frohms for the Lionesses’ third.

One Key Moment: England’s insurance goal was classic Kirby. Her pace with the ball at her feet, willingness to take players on, and clinical finishing were all on display during the sequence.

Not to take away from Kirby’s display, but I would argue that had England’s earlier goal been ruled offside, Germany would not have been so open and vulnerable to another in the closing moments.

Inside the Game: The Lionesses will leave the tournament on a high, having scored four goals – from three different goal scorers – en route to the trophy. Weigman certainly rotated her squad, giving a multitude of players the opportunity to prove themselves against top competition ahead of this summer’s Euros, and the English attack looked the best we’ve seen in a long while despite the squad rotations. As for the Germans, it’s hard to draw conclusions from the tournament given how many first team players they were missing through injury and COVID. They scored two goals, but conceded five – the most among teams in the tournament – and finished with just a single point.

The Skinny: Spain defeated Canada on Wednesday to finish second in the tournament. Twenty minutes into the match, Ashley Lawrence was dispossessed on the flank, and a series of passes involving no less than five Spanish players brought the ball all the way to the Canadian penalty area. Leila Ouahabi sent in a low cross to the penalty spot, where Alexia Putellas was left unmarked and hungry for the finish.

Minutes after Spain went ahead, the Canadians had their best chance of the match, but narrowly missed equalizing. Janine Beckie sent in a driven free kick, and a diving Jordyn Huitema got her head on it, but her attempt hit the crossbar and bounced out. Unluckily, Kadeisha Buchanan, who beat her defender to the rebound, was a moment too quick, as the ball bounced off the grass and over her head. Spain managed to clear the ball to safety.

Spain controlled play after their goal, and almost added a second in the second half when a header of Putellas’ own hit the crossbar. But Canada grew back into the match in the closing 15 minutes, and had a golden opportunity to equalize once again. A whipped in corner kick in the 84th minute was slightly deflected before finding the head of Nichelle Prince – completely unmarked in front of goal – but the ball sailed over the bar.

One Key Moment: Putellas’ goal was undoubtedly the moment of the match on Wednesday. And it wasn’t just her clinical finish, but her movement off the ball that deserves the praise. She expertly delayed her run just enough to evade the Canadian defence, before swiftly moving to the penalty spot at just the right moment.

Inside the Game: The tournament was a much needed test for this Spanish side, who breezed through their last nine matches with a perfect record – nine wins, scoring 55 goals and conceding none. In fact, the last time Spain played a top ten ranked team was back in April of 2021 – a 1-0 win over the Netherlands. So, suffice to say, the last week proved to be a challenge like the Spaniards haven’t seen in quite a while. Finishing the tournament in second with two goals scored and just one conceded will be a positive for the side, and on an individual level, 21-year old Athenea del Castillo was the standout. She was named Player of the Tournament.

As for the Canadians, coach Bev Priestman will be able to pull a number of positives from the third place finish and results against two top teams in the world. After a sloppy first 45′ to open the tournament against England, the Canadians finished well against Spain. While the goals did not come on the day, the Olympic champions created a few dangerous chances in the final stages of the match on Wednesday. With all of the player combinations tried up top during the tournament, it will be interesting to see who Priestman fits with Christine Sinclair when she is back in the squad.