The A-League Women playoff race is heating up 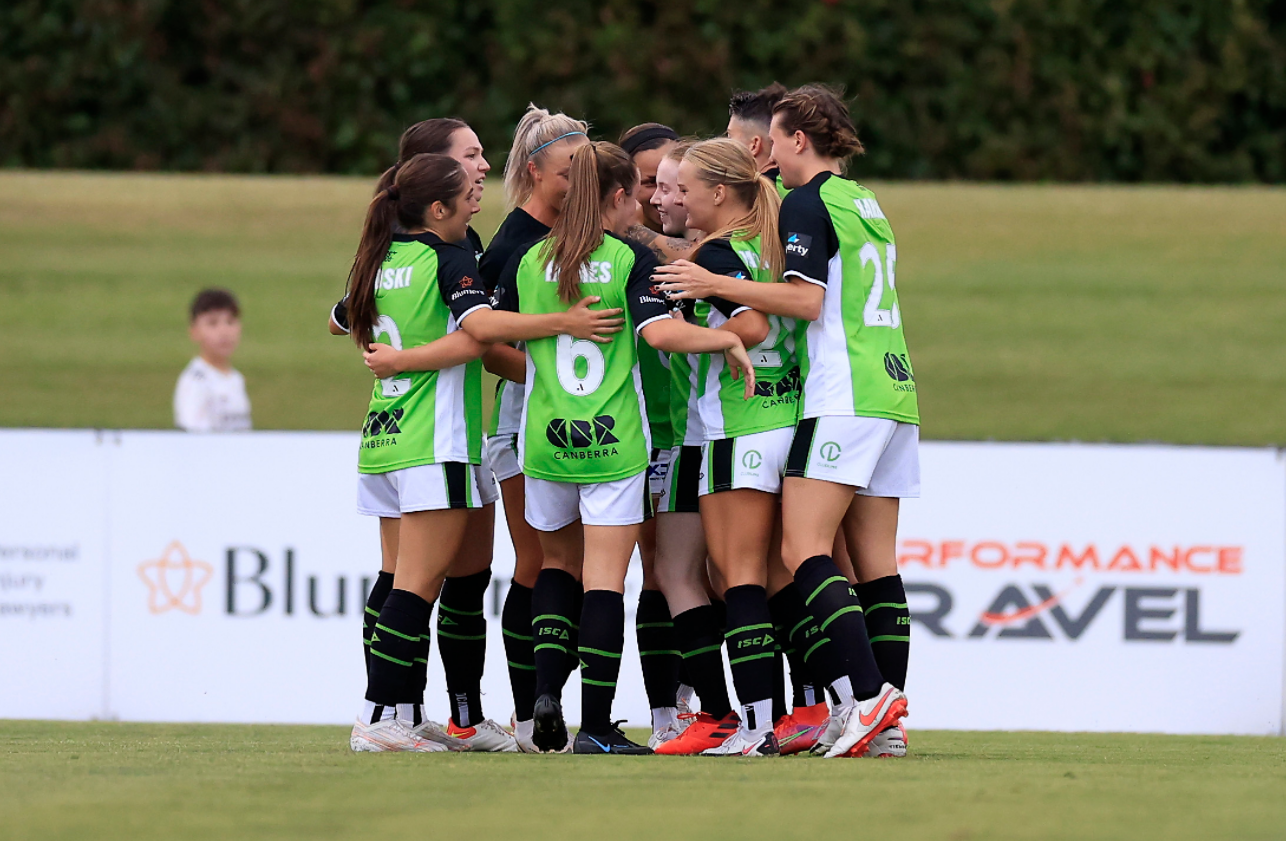 With only two rounds left to play in the A-League Women before the playoffs, this week we look at the likely semifinalists and at the addition of a second chance at the Grand Final for the top two teams.

In past years, the Premiership winners (regular-season title) would play the fourth-place side, but this season they will face the second-place club in the semifinals. The reason for that is that while — as in the past — the winner advances to the Grand Final to contest the league title, the defeated team will have a second chance at the championship through a Preliminary Final, when they play the winner of the other semifinal — between seed Nos. 3 and 4. This format is used in the Australian Football League (Aussie Rules) and in the A-League Men but typically with 5-6 teams in the playoffs — never before with four. With the A-League Women set to expand by two more clubs for next season, this format could foreshadow the addition of one or two more teams entering the playoffs in the 2022-23.

Sydney FC lost their first game in 2021-22 this past weekend, and their gap over second place Melbourne City in the race to the No. 1 seed — who would host the first semifinal. City is now two points behind with a game in hand.

Sydney’s defense has been superb, allowing only five goals in 12 games all season. Jada Whyman has nine shutouts, five more than second place Morgan Aquino (Perth), Melissa Barbieri-Hudson (Melbourne City) and Casey Dumont (Melbourne Victory), who all have four. Sydney has difficult games remaining away to both Perth (in Tasmania) and Adelaide. Sydney has won three league titles and finished runners-up in the Grand Final on five occasions, including the last two campaigns, and have never missed the playoffs. They have won three Premierships in the past. Melbourne City faces Newcastle Jets and Brisbane Roar at home, and Western Sydney away in their final games. City has a record four Grand Final victories out of four appearances in their first six seasons in the league, leveraging deep pockets from the City Football Group (Manchester City Men and Women, NYCFC of MLS, et. al.) and state-of-the-art training facilities in Melbourne. Melbourne City men have also won the Premiership twice.

Perth, having had only one true home game this season in Western Australia because of state COVID-19 travel protocols, hosts Sydney in Tasmania and then plays in Wollongong against similarly displaced Wellington Phoenix. For Perth, no matter what happens over the next two weeks, their season has been a success, particularly as they have had to play six home games away because of COVID-19 regulations. They also play Sydney on Feb. 27 in Launceston in Tasmania, where their men’s club has three home matches scheduled. After only 1 point last season, head coach Alex Epakis has stamped his mark on the side in his second season and they should continue to improve next season.

If Adelaide holds on to a top-four spot, it will be their first ever playoff berth in the league’s 14-year history. Adelaide lost three times this season to Melbourne clubs — twice to City — and would have to pull off a major upset in their playoff debut away from home unless they finish in third. Melbourne Victory has won two Grand Finals in three appearances and won one Premiership. Perth has appeared in two Grand Finals — both defeats — with one Premiership title, back in 2014.

In a match originally scheduled for round five, Canberra United went to Sydney and came away with their first win of the season in a 5-0 thumping of Western Sydney Wanderers on Feb. 15. Margot Robinne, who played in the first division of her native France, scored a late brace while American loanee Chelsee Washington (from the Orlando Pride) scored her second goal of the season. Western Sydney has now been shutout in eight of their eleven matches this season.

In the first rematch of last season’s epic Grand Final extra-time win by Melbourne Victory over Sydney FC, the Victory fought back from a 2-0 deficit to current league leaders Sydney to finish 2-2 in Melbourne on Feb. 16, in a game that was delayed from round nine. Australian youth international Princess Ibini scored for the second game in a row (her fourth of the season) and recently capped Matildas forward Remy Siemsen added her fifth of the season within the first 15 minutes of the second half.

Melbourne Victory bounced back with captain Lia Privitelli scoring her third goal of the season — more than in her previous five seasons at the club — and American Cat Zimmerman scored in the 92nd minute (her club-leading sixth goal of the season) to share the points. This was the first time Sydney allowed the opponent to score since an opening-game, 3-1 win over Newcastle in December and marked the end of Jada Whyman’s league-record scoreless streak of nine consecutive matches.

Adelaide United set a club record in wins (eight) and points (24) for a 4-1 win over Wellington Phoenix 4-1 on Feb. 18 in Wollongong, in a match that was played behind closed doors after it was delayed from the previous evening due to an electrical storm near the field. Chelsea Dawber had two goals and an assist and Fiona Worts added one to leave both players tied in the Golden Boot race with Melbourne City’s Hannah Wilkinson, on 10 each. Dawber had to leave the match with 12 minutes remaining due to a hyperextended knee and her status for the club’s next match against Melbourne Victory is to be determined. Grace Jale scored the lone goal, her club-leading fourth of the season for the Phoenix.

On February 18, the Brisbane Roar vs. Canberra United match was postponed due to an unplayable field that was waterlogged after a thunderstorm came over the area an hour before kickoff.

Perth Glory defeated host Melbourne Victory 2-0 in arguably the upset of this A-League Women season on Feb. 19. The Perth goals came in the last 20 minutes from Danish international Mie Leth Jans’ shot, but it struck Melbourne Victory American forward Cat Zimmerman on the leg for an own goal. Then, veteran forward Leena Khamis, who signed with the club last month on a short-term contract as an injury replacement, scored her first tally for the club. Khamis has over 120 league appearances and now has 45 goals in her 14 seasons in the league. She played 25 times for the Matildas. The Glory pulled within one point of Melbourne Victory for fourth place, but the Victory has played one game fewer, so they still have the advantage in the last two weeks of the season.

In a hugely entertaining game, American loanee Liz Eddy scored from the penalty spot and then Ashlee Brodigan scored her first A-League Women goal (in her fourth season at the club) in the 92nd minute to give Newcastle a 2-2 draw at home against the Western Sydney Wanderers on Feb. 19.

The Wanderers scored more than one goal in a game for the first time this season. After taking down Brodigan in the box in the first half to give away a penalty kick, 15-year-old midfielder Alexia Apostolakis scored in the 76th minute to give the Wanderers the lead before Brodigan’s heroics. The two teams also tied 1-1 in December in Sydney.

Melbourne City’s Rhianna Pollicina scored for the fourth consecutive game and her sixth goal of the season to help the home side to a 2-1 defeat of Sydney FC, knocking the latter from the ranks of the unbeaten and pulling to within two points of the top of the table, with an all-important game in hand. Kaitlin Torpey scored her second goal of the season and the ultimate winner just before halftime. City’s Holly McNamara left late in the game due to a potentially serious knee injury. City’s New Zealand internationals Hannah Wilkinson and Rebecca Stott were on international duty in the U.S. with the Football Ferns at the SheBelieves Cup. The game was played on Feb. 20 after being postponed from round eight.