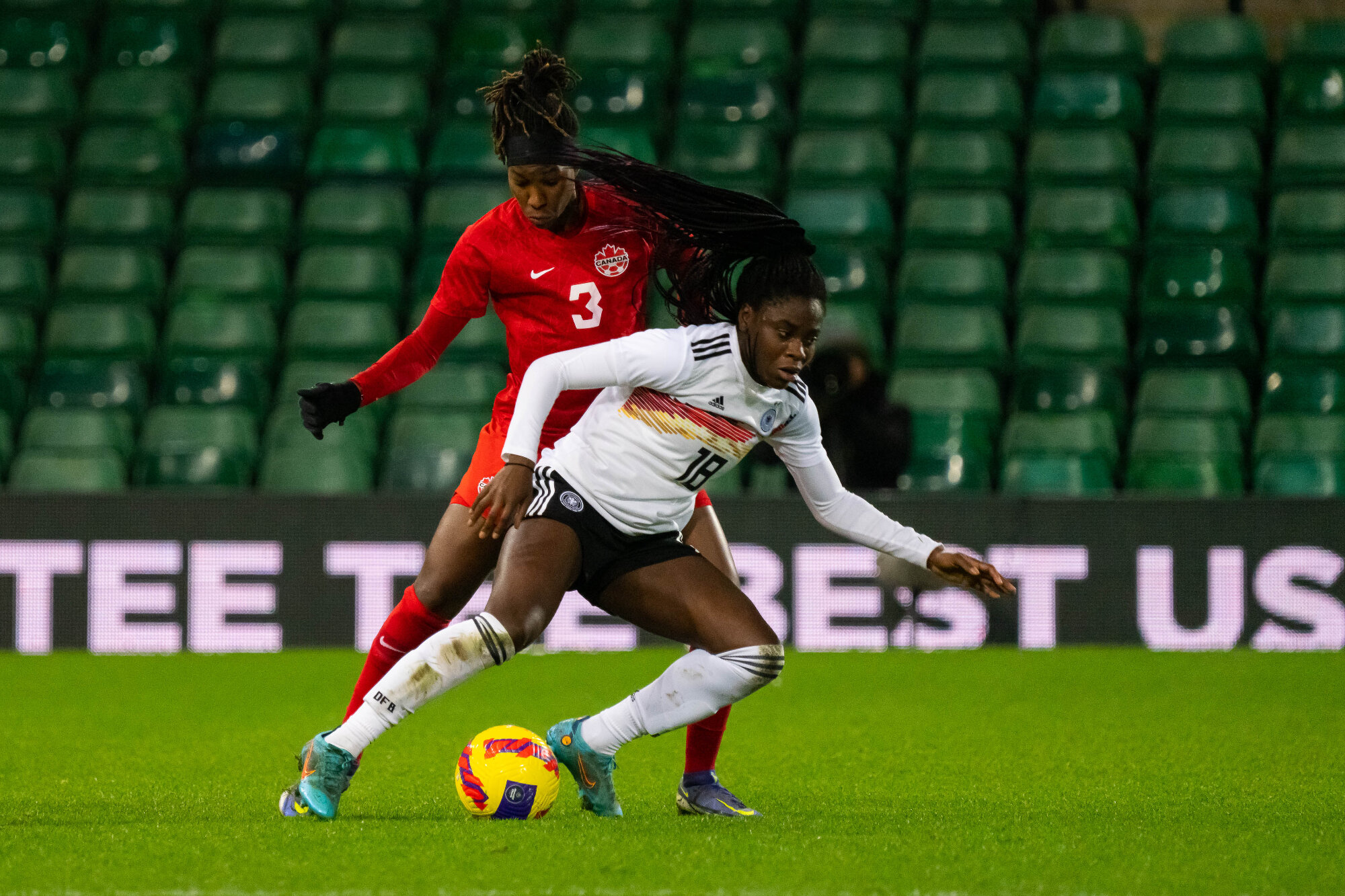 Day two of the Arnold Clark Cup was a wet and windy affair, with the after effects of Storm Eunice making conditions tough at Carrow Road in Norwich. As the only team to record a win thus far, Canada goes to the top of the tournament table with four points. Here’s how the day’s matches played out:

The Skinny: Canada struck first on Sunday against Germany in the second Arnold Clark Cup match of the day. Against the early run of play, Vanessa Gilles got her head on a corner kick in the seventh minute to put Canada ahead. It was the center back’s first international goal, in her 16th cap.

Gilles was – unfortunately – the center of attention shortly after at the other end, when it looked as though her arm made contact with the ball, but no penalty was given.

Though Germany saw much of the ball for the remainder of the half, Canada was dangerous on the counter after the halftime break, as Nichelle Prince was sent in on goal twice in the first ten minutes of the half.

But in the closing half hour, Germany showed their quality, and forced the Canadians to defend their lead. Canadian keeper Kailen Sheridan was sprang to action midway through the half, when she got to ground quickly to make an outstanding kick-save on a shot from German substitute Giulia Gwinn.

One Key Moment: Quinn played a sublime, outside of the foot through ball towards Nichelle Prince in the 52nd minute, before Prince was taken down by German keeper Ann-Katrin Berger. It was the kind of ball that Canadians have come to expect from Quinn, who has quickly made themselves integral to Canada’s starting eleven.

Inside the Game: Unfortunately, it was the referee who came into focus in this match with missed calls at both ends. The Gilles handball was fairly clear to all but not called, and in the second half, Berger likely should have been sent off for her late tackle on Prince. The Canadian forward was in on goal alone, making Berger’s should-have-been foul the denial of an obvious goal scoring opportunity, and red-card worthy. Despite the drama, Canada’s defensive prowess – led by another formidable performance by Kadeisha Buchanan – held strong, earning them just their second ever win over Germany.

The Skinny: Both squads were missing the final touch on Sunday, as England and Spain played to a scoreless draw. Spain dominated possession in the first 45′, but an organized and heavily rotated England was able to limit Spain’s opportunities, restricting their chances to just one shot on goal in the first half.

Moments after the halftime break, it was substitute Lauren Hemp – playing in her hometown – that nearly put the Lionesses ahead. She stole an errant pass at the back from Spain and rocketed a shot that hit the post but stayed out.

Spain had the next best chance on goal, when an attempted clearance by Rachel Daly fell to Lucía García just outside the goal area. With just keeper Hannah Hampton in her way, García’s attempt was poor, and sailed wide of goal.

England had a few dangerous chances in the remaining 20 minutes of the match – through Ellen White and Fran Kirby – but both couldn’t put it together, with White taking too many touches in front of goal, and Kirby electing to pass instead of shoot.

At the other end, it was substitute and eventual player of the match recipient Athenea del Castillo who gave England trouble late. Castillo created separation from Lucy Bronze in the 89th minute, but her shot was wide, and into the side netting. And in stoppage time, it was once again Castillo who caused problems for the Lionesses, as she managed to get one last shot off at the top of the box that forced a save from Hampton.

One Key Moment: Hemp’s shot that rung off the post was a hugely influential moment, as her arrival into the match brought some much needed pace to England’s attack. And it highlighted another rare defensive mistake for Spain, who were punished for similar sloppy defending against Germany.

Inside the Game: England’s depth was certainly on display on Sunday, as coach Sarina Weigman made nine changes to the side that drew Canada on Thursday. And despite an early miscommunication between herself and Jess Carter that led to a half-chance for Spain, debutante Hampton had a strong match as England’s goalkeeper, and her distribution was stellar throughout. As for Spain, Castillo was no doubt the difference maker in the second half, as her insertion into the game gave the Spanish team more quality out wide. But it was her chance in the 82nd minute that encapsulated Spain’s attack on the day. Castillo managed to beat Bronze on the dribble, but her ensuing pass towards the penalty spot was misplaced, turning a potential equalizer into an easy clearance for Hemp. It was that sort of frustrating day for the Spaniards.

Watch on Paramount+ in the U.S., TSN in Canada, and ITV in the UK.

Flush with talent and filled with questions, Germany tries to figure out its attack
Lauletta: On fast starts, own goals, and goal-scorers as USWNT downs New Zealand