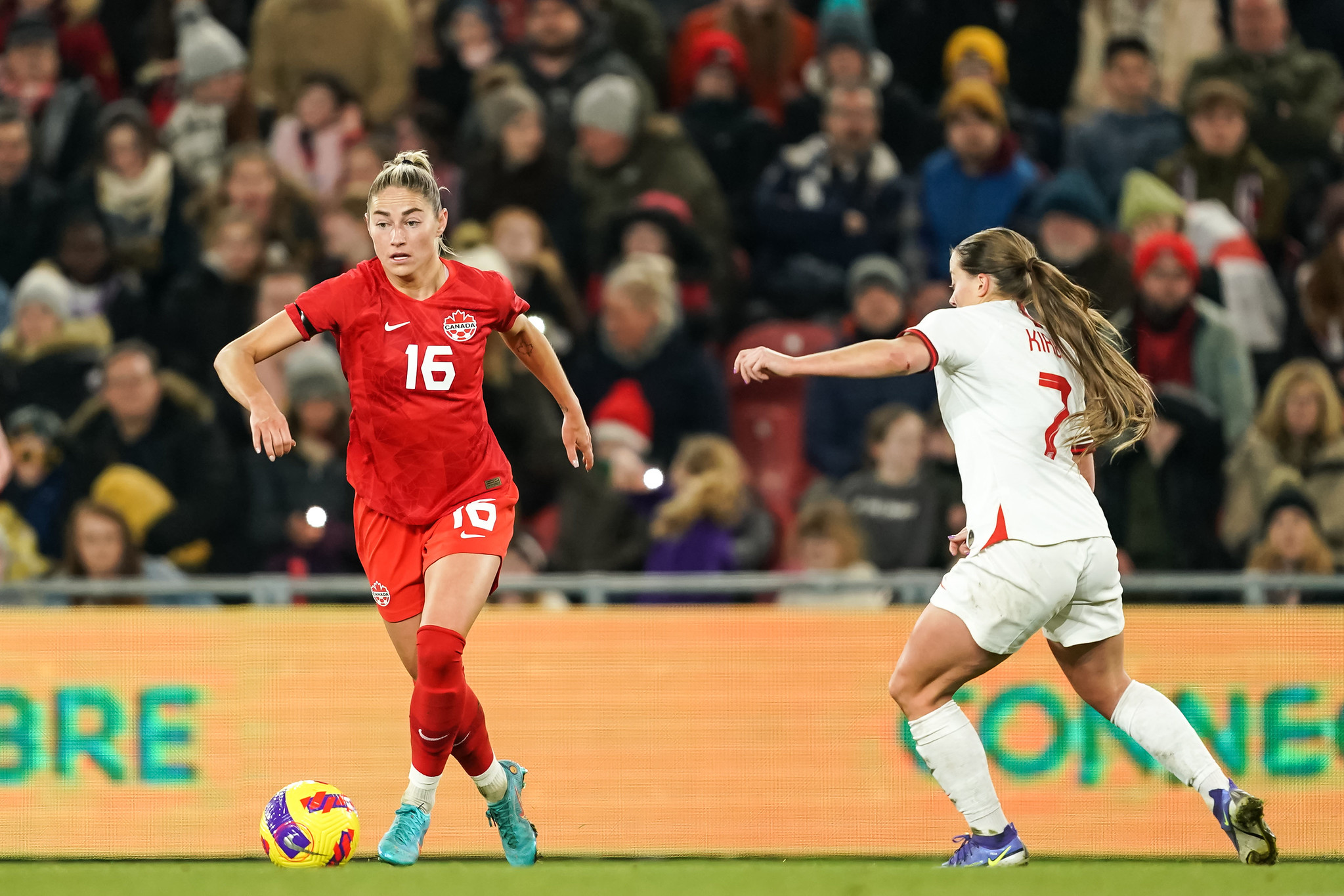 The inaugural Arnold Clark Cup – hosted by England – began on Thursday in Middlesbrough with two exciting 1-1 draws among four teams ranked in the top ten of FIFA’s rankings. Catch up on the day’s news and highlights below!

The Skinny: England had the bulk of dangerous chances against Canada on Thursday, but a beautiful volley by Millie Bright was canceled out by a stunner from Janine Beckie in the second 45′. England’s pace caused problems for the Canadians early, who had trouble gaining and keeping possession throughout the first half. In the 22nd minute, Canada were punished when keeper Kailen Sheridan’s punch couldn’t be cleared and fell to Bright, who expertly buried the loose ball.

Though the Lionesses had a multitude of opportunities to add another, it was Canada who found their footing in the second half. A cheap giveaway at the halfway line by England gave way to a dominant run through the middle of the park from Ashley Lawrence, who laid the ball off to Jordyn Huitema. Huietma found Beckie, who took a few touches and hit her shot perfectly past Mary Earps and into the upper 90.

One Key Moment: Despite England’s many chances throughout the match, the moment of the match has to go to Beckie’s equalizer. Her composure and the sublime finish – from a player who has seen very limited minutes for Manchester City as of late – has to be applauded.

Inside the Game: England will be disappointed to come away with a draw after their dominant first half performance, but the match highlighted the crucial midfield pairing of Leah Williamson and Kiera Walsh, who were both great on the day. As for the Canadians, the addition of Quinn into the match at the hour mark was a difference maker – they provide a crucial link in the midfield that the visitors were missing. But the reigning Olympic champions – not known for producing a plethora of chances against top sides – will need to take more risks in the final third if they want to challenge throughout the tournament.

The Skinny: Germany managed to claw their way back to draw Spain in Thursday’s tournament opener. After a cagey first 45′ that saw Germany create the better chances, it was Ballon d’Or winner Alexia Putellas that got Spain on the scoresheet just moments after the halftime break. Putellas took advantage of a poor attempted clearance by German defender Lena Oberdorf, and touched the ball up and over keeper Merle Frohms.

Germany left it late, but equalized with just minutes to spare through a clinical finish by Lea Schüller.

One Key Moment: Though neither goal was anything to write home about, Schüller’s finish featured some uncharacteristically poor defending from Spain. With Maximiliane Rall able to take a touch around Spain’s Laia Aleixandri with relative ease, Ona Batlle was forced to step to Rall, leaving Schüller completely unmarked in front of goal.

Inside the Game: Considering what German coach Martina Voss-Tecklenburg called an “energy-sapping” few days prior to the start of the tournament, the Germans should consider their late point a positive. As reported by The Goal’s Ameé Ruszkai, Germany’s squad – that was already depleted due to injuries – got reduced even further when six more players were left unavailable in the last few days due to COVID. On the other hand, the late blunder will be disappointing for Spain, who went an incredible 1530 minutes up to this point without conceding a goal. Yes, you read that correctly! The last time Spain conceded was against the United States at the SheBelieves Cup in March of 2020.

Leah Williamson is the new constant amid England’s defensive transition
Flush with talent and filled with questions, Germany tries to figure out its attack