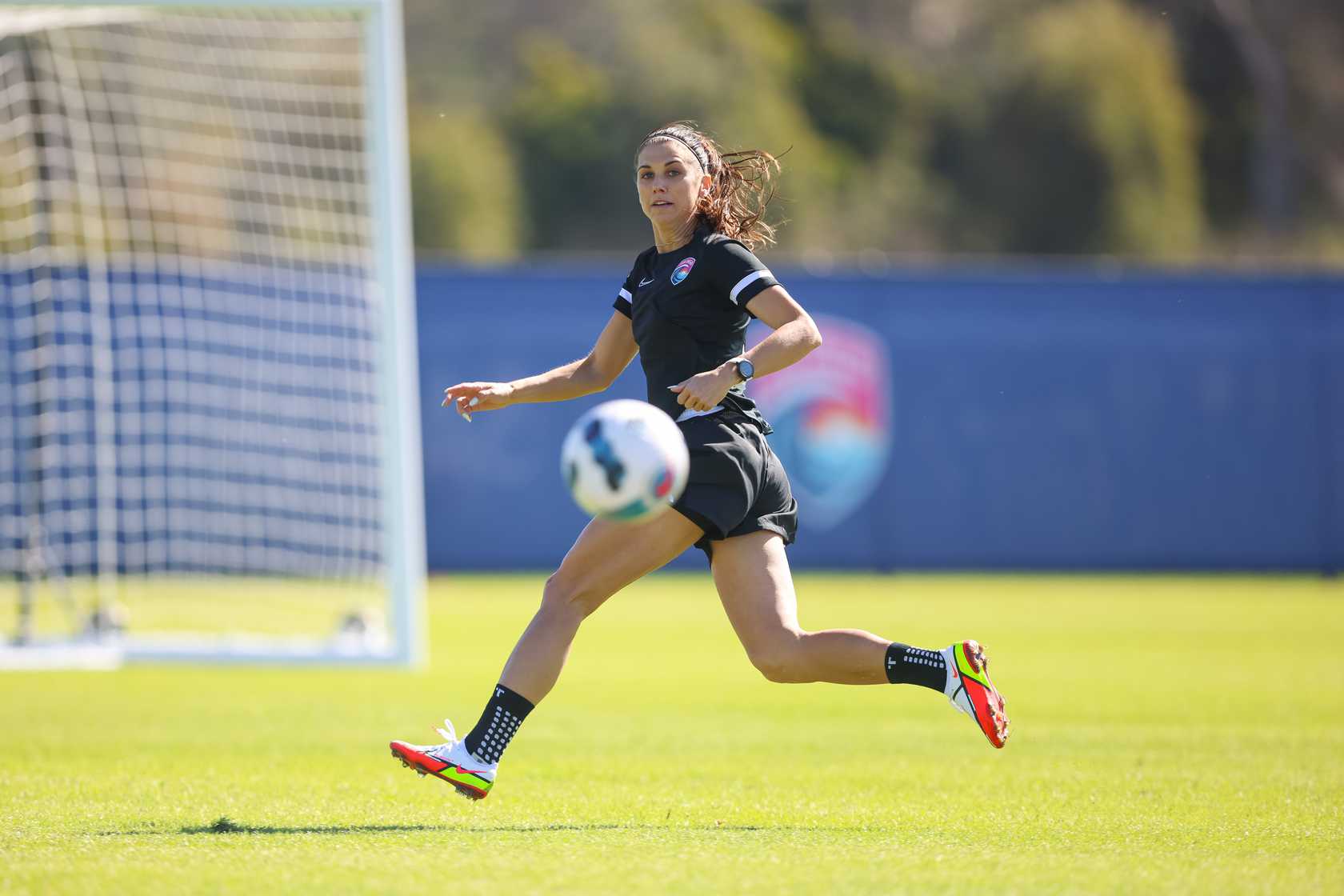 Buoyed by generous rules governing December’s expansion draft and myriad prominent players asking for changes of scenery, Angel City and San Diego held their new foes’ feet to the fire and have put together rosters that should be able to contend for playoff berths, which for 2022 will require finishing in the top half of the now 12-team league.

“It feels like it’s been months and months of working behind the scenes,” Wave coach Casey Stoney said. “For me as a coach, actually being on the grass with the players, seeing their characters and personalities, and setting out what we want to look as a club, what we want to achieve, and how we want to treat the players, it’s been absolutely incredible and amazing. Now we need to direct it into developing the team, the culture, and the performances we want to put out there.”

The Wave brought in proven, quality NWSL talent to anchor things at goalkeeper, defender, and forward. Kailen Sheridan helped Canada win the Olympic gold medal last summer and was named the league’s Best XI goalkeeper (though, strangely, not Goalkeeper of the Year). The Wave picked her up in a trade with Gotham and later added English goalkeeper Carly Telford to supplement the position. Stoney made no bones about Sheridan being the No. 1 keeper heading into training camp, but expects her to miss time to play for Canada over the summer.

In the back, the Wave’s first player acquisition was Abby Dahlkemper in a trade with the Courage. Dahlkemeper saw limited time last season, all of it in Houston, where she went on a short-term trade agreement, but was NWSL’s Defender of the Year in 2018 and was widely considered the United States national team’s best defender at the 2019 World Cup. The Wave made Naomi Girma the first pick in the college draft and supplemented the back line with veterans Kristen McNabb, Christen Westphal, and Tegan McGrady, the latter fresh off an NWSL Championship season with the Washington Spirit.

At the other end of the pitch, the Wave sent a bucketful of allocation money to the Orlando Pride to acquire Alex Morgan to be the centerpiece of their attack. Morgan had been loosely tied to her native California since the first announcement that NWSL was heading there, but it was not until right after the draft that it became reality.

“It’s a lot of getting to know players’ tendencies, kind of having soccer and non-soccer chats with everyone,” Morgan said of the early days of preseason. “We’re kind of seeing the way it works. Everything is kind of new so [the first few days], definitely a little bit of nerves, trying to act like you know what’s going on when you actually have no idea what’s going on.”

The kicker is that Morgan has rarely been a consistent scorer in the NWSL. Her best stretch was 2017 when her and Marta went off for half a season and lifted the Pride to what is so far their only playoff appearance. However, Morgan is not on the SheBelieves Cup roster for the U.S., which means for the first time in a long time, she has something to prove at the club level if she is going to remain a consistent factor at the international level. Several veteran U.S. players are in that unfamiliar position this spring.

“I had a great conversation with Vlatko [Andonovski, U.S. national team head coach] and he wants to continue to see some of the younger players,” Morgan said. “For me it’s exactly right. I haven’t played in a match in a few months. It will be great to have an entire preseason with San Diego, get some preseason games and just really get my match fitness up like it was last year. And then just continuing to showcase my best self of the field as we get into Challenge Cup and season.”

To complement Morgan, the Wave went to the international market and landed Sweden’s Sofia Jakobsson. The 31-year-old has 23 international goals and more than 100 for clubs. An even 50 of those came during a 91-match span with Montpellier between 2014 and 2019. If Morgan and Jakobsson can find chemistry and midfield service, they could be among the more dynamic strike duos in the league. They could also both be away for stretches of the summer. That will shine a light on depth players such as Jodie Taylor (also a candidate for a summer of international play), Makenzy Doniak, and Katie Johnson.

As for that midfield service, the center of the park certainly appears to be where the Wave are furthest behind in roster building. Only two of the nine players listed as midfielders, Emily van Egmond and Taylor Kornieck, are fully rostered. Kornieck is more a playmaker of the two while van Egmond is more of a disrupter. But van Egmond has yet to find a long-term home and Kornieck is still young and also prone to committing some ugly fouls.

The Wave appear to have a playoff-caliber roster everywhere besides midfield.

Heading north on the I-5

Up the coast, in the City of Angels, there is optimism the team will be able to win right out of the chute, and roster building has been aggressive. The club has already been to the international market to land attacking players Stefany Ferrer Van Ginkel and Jun Endo, as well as Canadian defensive stalwart Vanessa Gilles. They also acquired Savannah McCaskill to run the midfield and Christen Press to lead the charge up top.

“Everyone’s coming from different teams, different cultures, so we’re all in the same boat with that,” said Cari Roccaro, acquired from the North Carolina Courage, where she won two NWSL Championships. “Everyone is new, so we’re trying to figure out how to create a culture together based on where we’ve all come from. Overall, everyone’s really excited. Because we’ve all come from different places, there’s a lot of levels people are at rest-wise or fitness-wise. But the staff is doing a really good job taking that into consideration and trying to get us all in one line.”

That coaching staff is led by Freya Coombe, who was pried away from NJ/NY Gotham FC midway through the 2021 season. Under Coombe’s leadership, Gotham rose to a mid-table side and came within a DiDi Haracic save of a Becky Sauerbrunn penalty from winning the 2021 Challenge Cup. That shot ricocheted off Haracic’s hand and the Thorns eventually won the shootout. Haracic followed Coombe to Los Angeles and is the clear No. 1, where at Gotham she was sitting behind Sheridan, who was injured during the Challenge Cup. Time will tell if Haracic is up to the task of being a full-time starter, but whether she is or isn’t, keeper depth is currently an issue for Angel City.

While Angel City has put together a solid roster, two elements stand out. One is that management has taken strides to make players comfortable by keeping the number of players in camp below the league roster limit, and by declaring no players will be traded during the season.

“I have been in preseasons where there has been like double the roster,” Roccaro, who was cut by the Houston Dash in 2018 at the very end of preseason, said. “The feelings you get of, ‘Am I going to make the team? Are they going to cut me tomorrow?’ Those can really affect how you play. To feel secure here, for them to say on day one, ‘We brought you here for a reason, we know you wanted to be here, it was a mutual decision on both ends for everyone to come here and represent Angel City and you should feel secure and we’re not just going to throw you to the curb tomorrow…’ I think that puts people in the best position possible to be free, play free, and that’s a huge thing for players.

The other oddity hanging over Angel City is the status of Julie Ertz. The longtime Chicago Red Stars captain was acquired in a trade but has not reported, nor has she been part of a U.S. national team camp since the Olympics. A club spokesperson told The Equalizer that Ertz is not expected to play this season. Angel City retains her NWSL playing rights, but having come off the now obsolete U.S. allocation system, Ertz is not under contract.

Three things to watch for a new-look USWNT at SheBelieves Cup
The USWNT’s future is here, but it has not yet arrived