FAWSL Week 14 Roundup: Chelsea close in on Arsenal at the top 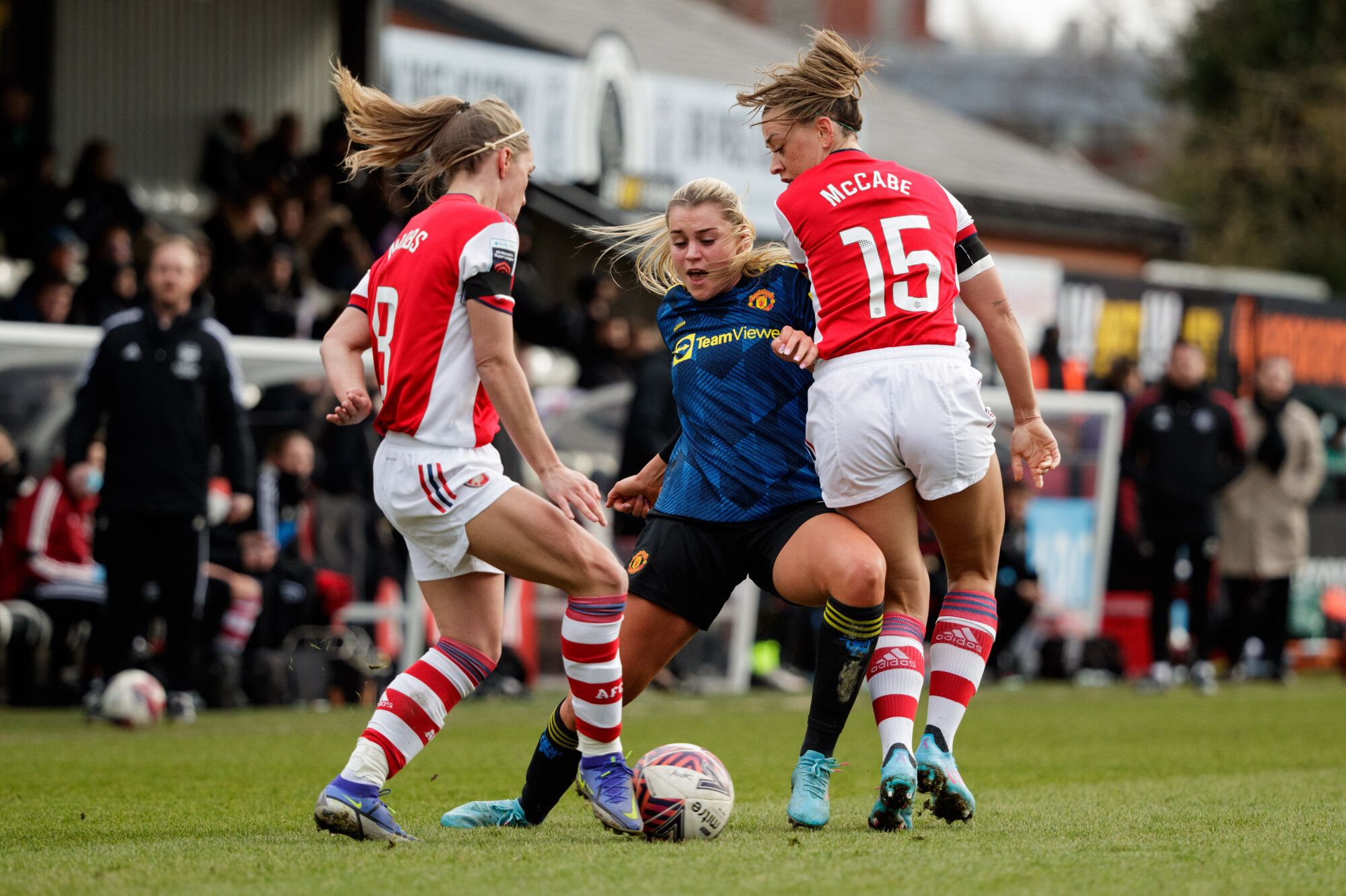 Things are heating up in the FA Women’s Super League, as reigning champions Chelsea gained ground this weekend on league leaders Arsenal. Chelsea now trail Arsenal by just two points – with the added benefit of a game in hand – setting up Friday’s crucial Chelsea-Arsenal clash to be a potential title decider.

We have all of the week’s news and highlights for you below!

Manchester United missed a golden opportunity to gain ground on the leaders this weekend, as they lead for 70 minutes on Saturday before Arsenal equalized late.

All alone in the goal area, Alessia Russo rose in the tenth minute to head home a corner kick for the lead.

Russo – the player of the match on the day – also worked wonders at the other end shortly after the halftime break, as she was in the right place at the right time to clear the ball off the line when Jen Beattie’s shot came close to leveling things for Arsenal.

United’s Ella Toone almost gave her side a cushion shortly after, when some sloppy defending from Arsenal lead Toone to a 1v1 with keeper Manuela Zinsberger. But Toone’s shot sailed just wide and into the advertising boards with a thud. Minutes later, things got worse for Arsenal when Katie McCabe received her second yellow card of the match and was sent off.

Though they were down to ten, surprisingly it was Arsenal who would strike next for the equalizer. The Gunners – who sorely missed an injured Leah Williamson’s passing out of the back throughout the match – finally found success by going direct. It was Vivianne Miedema who hit a beautiful pass, spanning half of the field’s length to find Stina Blackstenius surging towards goal. Arsenal’s new Swedish recruit made no mistake with the finish.

McCabe absence in Friday’s match against Chelsea will be hugely disappointing for the Gunners.

A sold-out Kingsmeadow was the stage for Sunday’s close clash between Chelsea and City.

The home side opened the scoring early, when Jess Carter floated in a cross – one that hung in the air longer due to heavy winds – towards the back post. Guro Reiten beat City’s Alex Greenwood to the ball, and managed to direct her header out of the reach of a diving Ellie Roebuck.

City’s best chance at equalizing came in the second half, when an in-form Jess Park forced a great diving save out of Ann-Katrin Berger. It was an end-to-end affair in the closing minutes, with Roebuck denying Lauren James’ low shot on one end, while City caused havoc in Chelsea’s area afterwards, forcing Millie Bright to block a shot by Lauren Hemp.

Everton’s Woes Continue — After just three months at the helm, Everton manager Jean-Luc Vasseur was sacked this week. The former Lyon boss was Everton’s second manager of the season, as he replaced Willie Kirk in October. The timing of the announcement was peculiar, as the club announced the news on Wednesday just ten minutes past midnight, in a likely attempt to reduce negative press. Everton sit third from the bottom, and had a record of three losses, two draws, and one win in the league under Vasseur.

Conti Cup Final — Chelsea defeated Manchester United 3-1 on Wednesday, and Manchester City blanked Tottenham Hotspur 3-0 on Thursday to set up a Chelsea-City Continental Cup Final in March (a rematch of Sunday’s league result). Chelsea will be looking to secure their third straight title.

Contract News — On Tuesday, the FA and the Professional Footballers Association (the PFA, England’s player’s union) announced a “landmark agreement” that will see “enhancements to maternity, injury and illness and termination of contract for long-term injury” come into effect for WSL and Women’s Championship players for the 2022/2023 season.

While both parties praised the agreement, the PFA’s release “warned that there remains much to be done to achieve parity between female players and their male counterparts.”

Reading 2, Everton 1 — An emphatic, late comeback by Reading secured three points over Everton on Sunday. Everton led for 70 minutes after an early goal from Anna Anvegård, but a 25-yard bomb by Natasha Dowie and a goal mouth scramble finished by Tia Primmer flipped the script late for Reading. Reading keeper Grace Moloney also deserves kudos on the day, as she delivered a diving save to deny Izzy Christiansen’s penalty kick shortly after the halftime break. That’s Reading’s fifth straight win in the WSL, while Everton extended their losing streak to three.

Leicester City 2, Birmingham City 1 — The trouble began early on Sunday for Birmingham, as goalkeeper Emily Ramsey was sent off in the 26th minute for taking down Leicester’s Jess Sigsworth, who converted her penalty with ease. The Foxes added a second inside the first 45 when Jemma Purfield’s corner kick snaked through the Birmingham defenders and directly in. A late goal by Blues’ captain Louise Quinn brought her side within one, but the comeback couldn’t be completed.

West Ham United 2, Aston Villa 1 — West Ham and Aston Villa went back-and-forth on Sunday. Abbey-Leigh Stringer scored her first goal for the Hammers early, but Villa’s Alisha Lehmann equalized with a penalty kick before the half. After the break, Katerina Svitkova gave West Ham the lead and the win when her shot squeezed under Villa keeper Hannah Hampton.