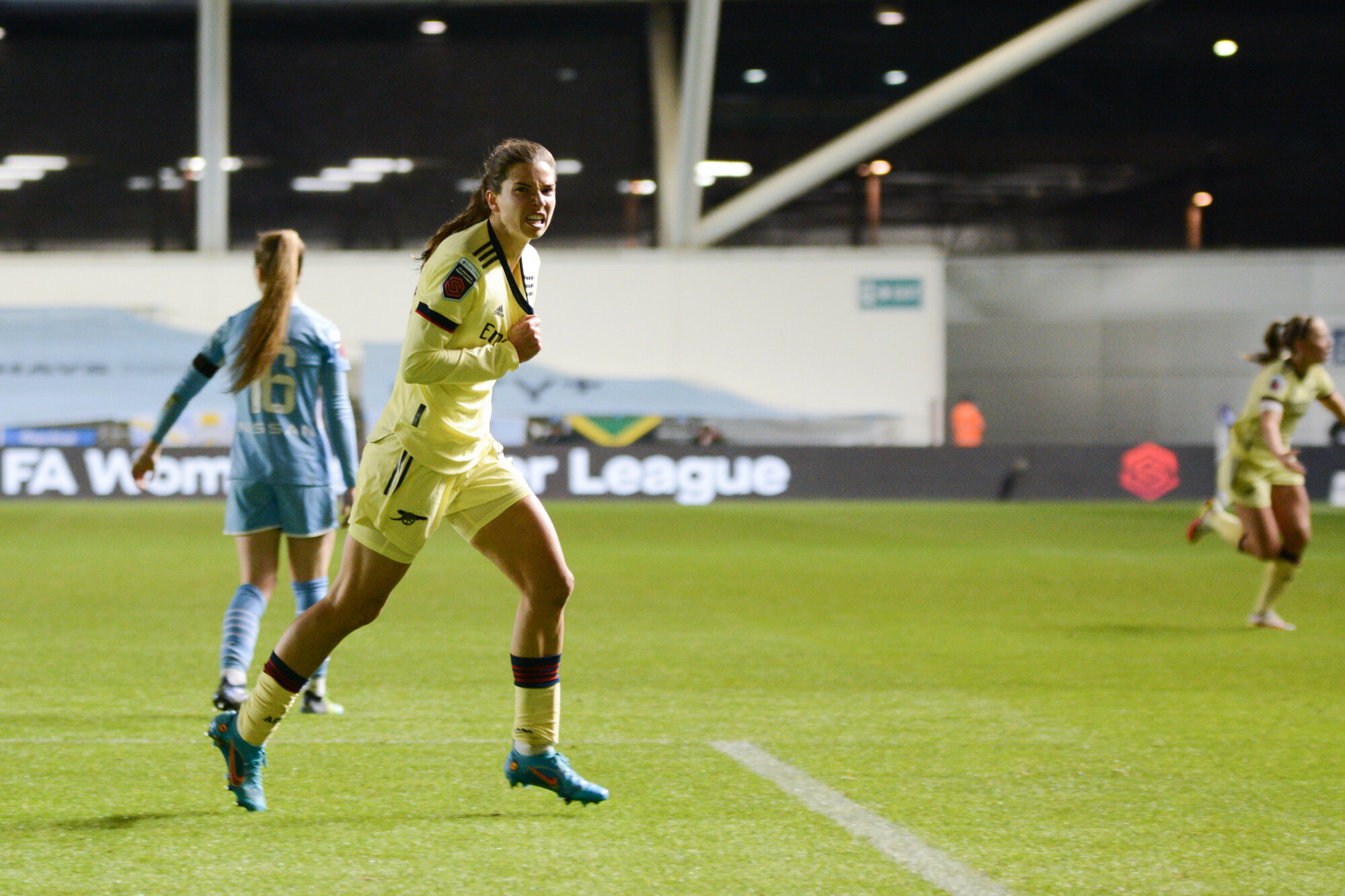 It was full steam ahead in the FA Women’s Super League this weekend, as we had a full slate of games (no postponements!) for the first time since mid-December.

Chelsea dropped some crucial points with a draw at Brighton, while controversy clouded Manchester City’s clash with Arsenal. Read on for the most important news and highlights from the week!

A scoreless, but chippy first half – including a high boot from Arsenal’s Katie McCabe on Georgia Stanway that could’ve been a booking – made way to an even livelier second half on Sunday in Manchester.

Both teams had decent looks on goal after the break, and controversy struck shortly after the hour mark. In the middle of the park, City’s Lucy Bronze made a pass intended for Caroline Weir, but the pass hit the referee and instead was deflected into the path of Demi Stokes. Stokes had the entire left wing to run down, and the ball found Lauren Hemp, who expertly dodged a tackle by Arsenal’s Noëlle Maritz, and crossed to Bunny Shaw for the clinical finish.

Arsenal’s shambolic defending on the play didn’t help, but here’s the kicker: Law 9.1 of the Laws of the Game states that “The ball is out of play when…it touches a match official, remains on the field of play and…a team starts a promising attack.” So this one comes down to whether you consider the ensuing play “a promising attack.”

You may disagree, but in my view, a player receiving a deflection and immediately having that much space down the wing for a quick transition constitutes a promising attack, and as such the play should have been stopped by the referee.

Just as it looked like City would come away with all three points, Tobin Heath – in her first WSL appearance since October – rescued the Gunners. She hit a left footed strike from a tight angle in stoppage time that slid just under City keeper Khiara Keating.

Meanwhile, Chelsea were kept scoreless on Sunday away at Brighton.

It was Brighton that had the first dangerous chance of the game, when Danielle Carter’s long range shot forced a diving save by Ann-Katrin Berger. But it was Brighton keeper Megan Walsh that deserved player of the match honours on the day, as she stopped five shots on goal throughout the match – including a fantastic, one-on-one stop on Fran Kirby in the first half, and a point-blank reaction save on a Bethany England header at the end of the match.

The draw ended Brighton’s streak of four straight defeats, while Chelsea are now scoreless in their last two WSL matches.

Continental Cup news — The Conti Cup semifinals are set after the quarterfinals were played mid-week, with the highlight being Manchester United’s 1-0 win over Arsenal. In early February, Chelsea will take on United, and City will take on Tottenham for a spot in the final.

Millie Turner unavailable for an “indefinite period” — Manchester United announced on Sunday that defender Mille Turner will be out indefinitely “after recent medical investigations revealed an issue with the artery in her neck.” The club noted that she will undergo “modified training and reassessments in the coming weeks and months.”

Jill Scott on the move? — As reported by Telegraph Sport’s Tom Garry and BBC’s Emma Sanders, Manchester City’s Jill Scott may be close to a short-term loan deal. Scott, who has gotten limited playing time this season, went on loan to Everton last season too. Garry reports that Aston Villa is Scott’s likely landing spot.

Reading 3, Birmingham City 2 — An emphatic comeback from Reading on Sunday extended their streak to four WSL wins in a row. Down two goals to nil after the first 45, Reading clawed their way back in the second half with a converted penalty kick by Natasha Dowie, a second from Justine Vanhaevermaet, and a beautiful volley by Emma Harries for the win.

Why Ashley Lawrence is the epitome of the modern fullback
A-League Women: Adelaide United and Perth Glory both record 1-0 wins to stay fourth and fifth