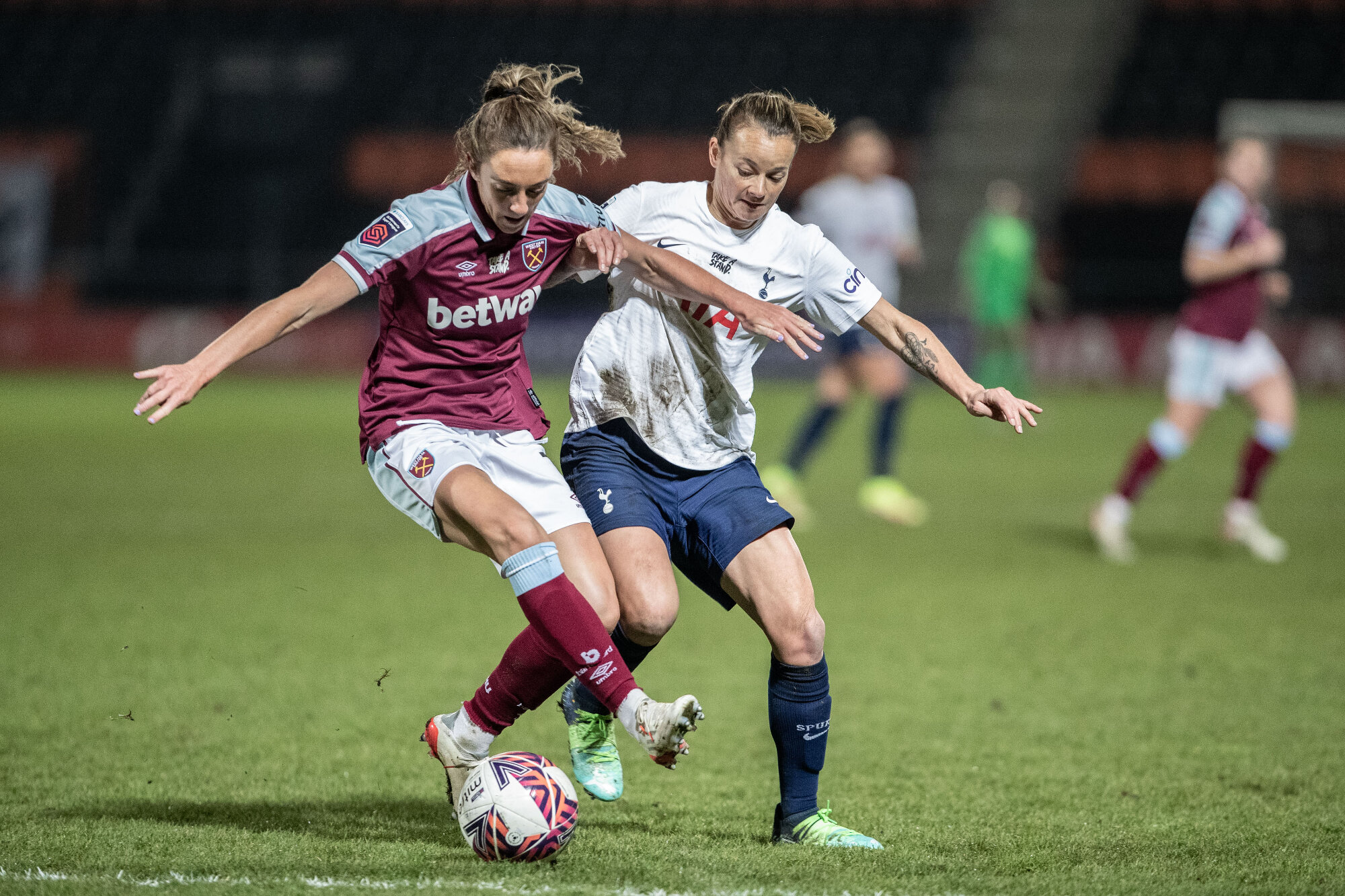 Week 12 in the FA Women’s Super League featured some last ditch drama that had significant table implications, while off the field it was a busy week for player news.

Though two more matches were postponed on the weekend, optimistically, the number of new positive COVID tests is decreasing (down to 16 across the WSL and Championship, as compared to 40 the week prior). Read on for all the news from the week in England!

It was a drama filled London derby on Sunday, as West Ham snatched away Tottehman’s lead with just moments remaining.

After a scoreless first half, the trouble began for West Ham. Defender Hawa Cissoko, already on a yellow card, came through the back of Spurs striker Jiali Tang in the area. It was a poor decision by Cissoko, and the referee rightly pointed to the spot after the play. Rosella Ayane stepped up and slotted home the penalty for the lead.

To make matters worse, Cissoko was sent off just two minutes later with another yellow card.

Down to ten, West Ham struggled to find their way back into the match, but the tide turned in their favour in the very last moments, courtesy of a superb bit of skill from Hammers midfielder Kate Longhurst. Dagný Brynjarsdóttir sent in a looping ball towards the area, and Longhurt’s header was expertly arced just up and over Spurs keeper Rebecca Spencer.

West Ham’s equalizer prevented Spurs from moving to second in the table. They had to settle for sharing the points on Sunday, and instead move down to fourth. Meanwhile, West Ham are now four games unbeaten, and sit in 8th.

Good news for Arsenal fans — After Arsenal’s thorough defeat at the hands of Birmingham last weekend, the team gave supporters something positive to talk about with a trio of new signings. Swedish striker Stina Blackstenius, Austrian defender Laura Wienroither, and Brazilian centre-back Rafaelle Souza all joined the club. Souza is the first ever Brazilian player to sign for Arsenal Women.

Meanwhile, Leah Williamson also signed a contract extension with the club. The centre back joined the London side’s academy at just nine years old, and made her first team debut for the club in 2014. Williamson is back in training after a hamstring injury that has kept her out of contention since mid-November.

And if the signings weren’t enough to give Gooners a smile, Tobin Heath was also spotted back in training late last week. Heath has been out even longer than Williamson, as she hasn’t played a match since United States’ friendly against Korea Republic in late October.

Houghton and Morgan re-sign with City — It must be that time of year for contract extensions, as captain Steph Houghton and defender Esme Morgan both inked deals to extend their stay with Manchester City this week. Houghton recently returned to competition after a four-month injury layoff, while Morgan is currently recovering from a broken leg sustained in September.

Leicester City 1, Brighton & Hove Albion 0 — Leicester City leapfrogged out of the bottom of the table on Sunday with their second win of the season. Jess Sigsworth beat her defender on the wing with a nice bit of skill before crossing to Shannon O’Brien for her first goal of the season. That’s four losses in a row now for Brighton.

Manchester City 3, Aston Villa 0 — City defeated Villa 3-nil on Saturday, courtesy of a brace by Georgia Stanway and a goal by Vicky Losada. That’s City’s fourth win in a row, which has clawed them back up the table and into contention for a Champions League spot after a disastrous start to the season. They sit in fifth place with 19 points.

Manchester United 5, Birmingham City 0 — Meanwhile, United also notched a thorough win on Saturday over Birmingham. Goals by Katie Zelem, Leah Galton (x2), and Alessia Russo, with an added own goal by Birmingham defender Emily Ramsey told the story on the day. United sit in third, tied on points with Spurs but with a better goal differential. With Leicester’s win and Birmingham’s loss this week, Birmingham are back in the relegation spot.