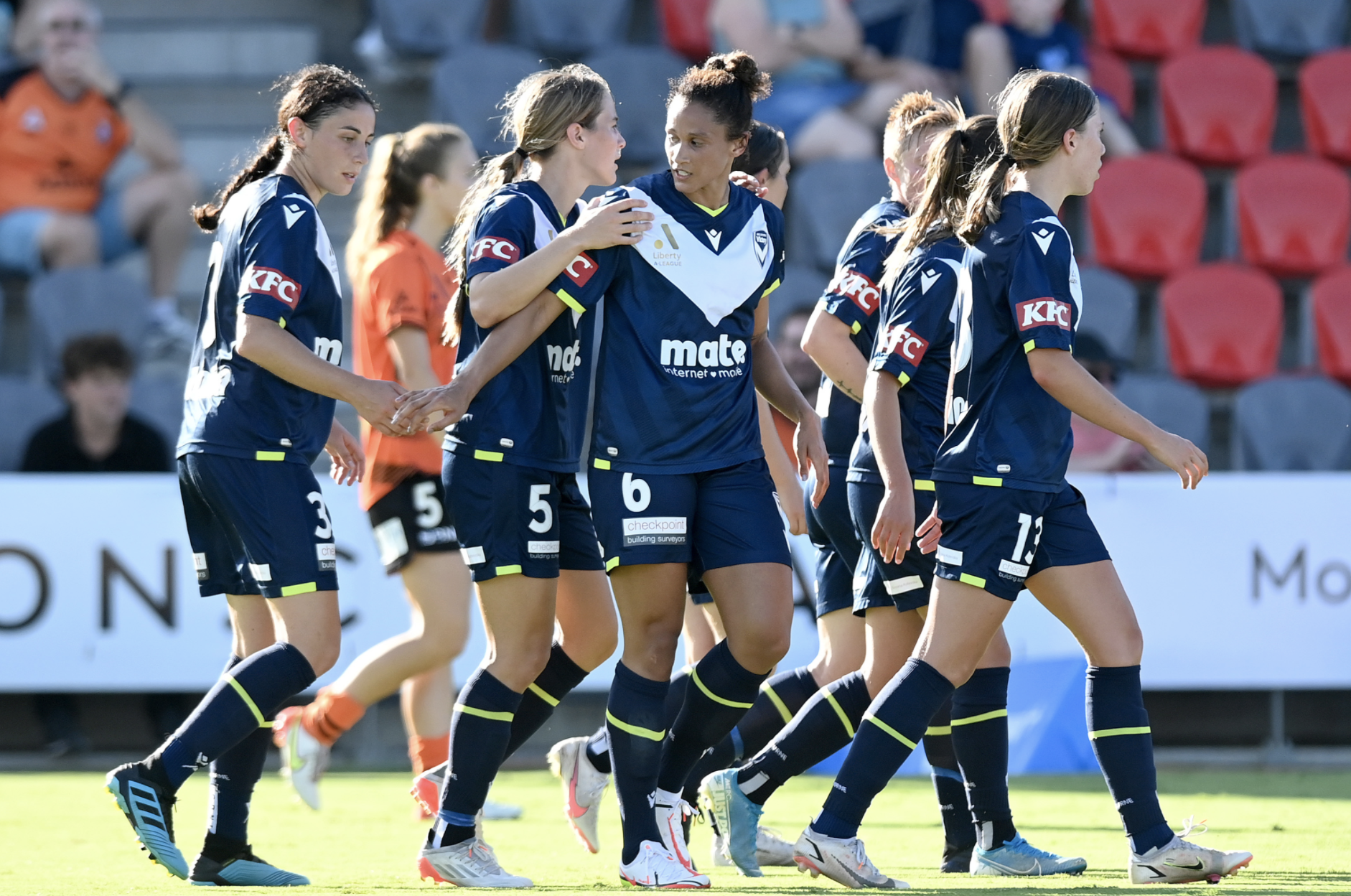 Down in Australia, Lynn Williams and Cat Zimmerman scored once again as the Melbourne Victory remain on top of the table — along with Sydney FC.

Ashlie Crofts scored her first A-League Women goal in the 90th minute to rescue a share of the points for the Wanderers in a 1-1 tie with visiting Newcastle. Crofts had a chance late in injury time to grab the winner but her low shot in the box was saved by Jets goalkeeper Georgia Boric. The Jets took the lead in the 21st minute from Tiana Jaber’s long-range blast well outside of the penalty area, with the assist going to Cassidy Davis, who was playing in her 100th consecutive game across nine seasons which have all been with the Jets. Davis is the first A-League player — men or women — to hit the century mark for consecutive appearances.

This match was postponed due to Western Australia border restrictions during COVID. The A-League men’s side will not play at home for the rest of 2021 and probably all of January 2022 as the WA border is not set to open until the first week in February, since the Glory and visiting teams would have to quarantine upon entering the state. The Perth Glory Women are also forced into a long road stint before they can make up their home games later in the season, which is unfortunate given their outstanding start with six points from two games.

However, Glory head coach Alex Epakis felt that the time away from home could be a positive, “That togetherness and time away may prove to be even more powerful for this group than it would be if it was a normal schedule. We all know we have a job to do this year and to be all together in the same place, really focusing on that, might be even more beneficial for us all.”

New Zealand international and former University of Tennessee forward Hannah Wilkinson scored her first two A-League Women goals to lead Melbourne City to a 3-1 home win over Adelaide United. Former Australian U-17 international Rhianna Pollicina scored the first goal of the game from a brilliant curling ball into the top far corner of the net from five yards outside of the penalty box and added an assist in her first year with City after moving from Newcastle following the 2020-21 season.

Melbourne Victory remained perfect after three games and at the top of the table with a 3-2 road victory over the Brisbane Roar. American international forward Lynn Williams scored a goal and assisted on fellow American Cat Zimmerman’s tally, her third of the season.

American Shea Connors, who was profiled last week, scored for the Roar.

Sydney FC used goals by Cortnee Vine, Charlize Rule and Mackenzie Hawkesby and goalkeeper Jada Whyman earned her first shutout of the season in a 3-0 defeat of Wellington Phoenix to stay even with Melbourne Victory at the top of the table on nine points.

Three Japanese imports have moved up to the A-League Women this season from the NPLW.

Japan is a dominant force in Australia’s regional confederation — Asian Football Confederation (AFC) — but there have been only five Japanese nationals in the A-League Women over the past 13 years, compared with almost 100 Americans. Japanese players in the league have included:

This season, there are three Japanese players in their first year in the league, with two of them at Adelaide United and one with Brisbane Roar. Significantly, all three have moved up to the national league after making their mark at the local state league level, showing again that, as the A-League Women has skewed younger over the past few years, the NPLW state leagues are becoming a vital conveyor talent, of not only young Australian players, who have not gone abroad to play professionally or collegiately, but also from other nations as well.

For Adelaide United, who have always relied on promoting players from the NPLW, particularly the teams in South Australian, new signing midfielder Reona Omiya had spent the 2021 NPL Victoria Women season briefly with FC Bulleen Lions before joining South Melbourne FC, until the competition was suspended due to COVID; she scored three goals in 11 matches with both teams. She played in Japan with a number of sides including Elfen Saitama and Nagano Parceiro.

Midfielder Nanako Sasaki is another new signing for the Reds who came to the NPLW in 2017 and spent four seasons with Adelaide City before switching to Adelaide Comets at the start of this year; she scored four goals in 24 games and was selected for the WNPL South Australia Team of the Year for the third consecutive season. Sasaki said: “This is really exciting for me to progress as a footballer and I really appreciate this opportunity. Ever since arriving in Australia, one of my goals has been to play in the A-League Women competition and I’m really happy that dream is closer to coming true.”

Adelaide United’s A-League Women Head Coach, Adrian Stenta, explained why he signed Sasaki: “Nanako is a player we have monitored for a while and is one of the best players currently in the WNPL SA. She is a technically gifted player who will provide a lot composure and balance to our midfield.”

Midfielder Rie Kitano is in her first season with the Brisbane Roar after starring in the NPL Queensland state league, where she scored 31 goals in less than three full seasons. Kitano played for Elfen Saitama and Okayama Yunogo Belle in Japan’s Nadeshiko League before relocating to Australia in early 2019 to link up with Gold Coast United. She then transferred to Souths United in 2021 and played against the Roar as part of the NPL All-Stars team in an exhibition match last December.

Roar Head Coach Garrath McPherson said, “Like Shea Connors and Mariel Hecher, Rie is another example for players in our NPL Women’s competition of the pathway that exists into the W-League.”

Looking Ahead: Round 4 Matches

Monday, Dec. 27: Wellington Phoenix is at home against Newcastle Jets at 2:45am ET — live streaming on YouTubeTV.