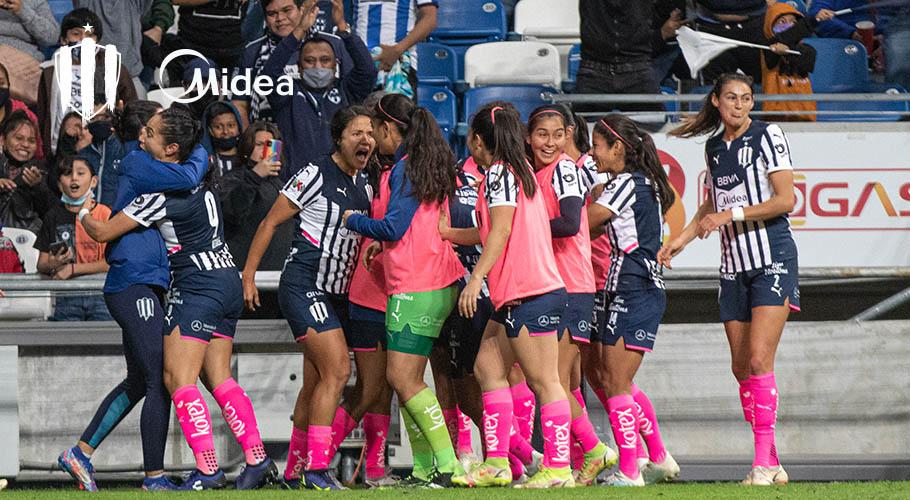 The Liga MX Femenil Liguilla has not disappointed this season. After getting a scare from Club America in the first leg, Tigres bounced back in leg two to punch their ticket to the Apertura Finals. Meanwhile, C.F. Monterrey barely squeaked in and will count themselves lucky to be the higher seed against Atlas.

Take a look at what happened in the semifinals this past weekend.

The upset was so close, but then became so far for Club América. It was only a matter of time before Tigres would score in the second leg, but then the reigning champions scored again, and again… and again. Tigres’ four goals in the second leg propelled them to yet another Liga MX Femenil Final.

In the first leg, Club América stole the show. Daniela Espinosa opened up the scoring in the second half — in fact, all of the goals in this series only came in the second half of each game. Espinosa had the easy part, as Angelique Saldivar did the tough part. Saldivar put pressure on Tigres’ Bianca Sierra and then took the ball from her, slipping it over to Espinosa. Club América doubled their lead, courtesy of Sarah Luebbert, on loan from the Chicago Red Stars. Sandra Mayor pulled Tigres back within one, giving América the edge in the first leg.

However, the tide changed quickly in the second half of the second leg, at a filled up Estadio Universitario full of loud Tigres fans.

First came the tying goal from Liliana Mercado, which was a world-class strike. Sandra Mayor then doubled the lead, giving Tigres the edge on aggregate, with a penalty kick, won by Maria Sanchez. Then, it was Sanchez’s show, as she danced around defenders and scored in the 69th and 85th minutes.

Tigres is on their way to yet another Apertura Final. To add insult to injury for Club América, Katty Martinez made her return from injury toward the end of the match, just to get some minutes. Now, with Martinez back in the fold, Tigres has a full roster available for selection with plenty of star power.

Once again, Monterrey has squeaked into another round of the Liguilla. In their first slate of playoff competition, Rayadas barely took down Tijuana, and drew in both matches. They advanced because they were the higher seed. That rule came into place once again, as the aggregate score was tied 2-2. It was heartbreak for Atlas, who were looking to follow in the footsteps of their male counterparts who just won the Liga MX title over Club Leon.

Alison Gonzalez scored the lone goal in the first match, in the 68th minute off a chip over goalkeeper Alejandra Godinez. Her assist came from goalkeeper Ana Paz, who hit a well-struck ball to a fast-breaking Gonzalez.

In the second leg, Atlas’ defense couldn’t hold up. Gonzalez got on the scoreboard once again, this time giving Atlas the first half lead. In the 41st minute, Gonzalez slipped in between her two defenders and hit the ball low and past Godinez.

However, Rayadas responded. Christina Burkenroad found herself open in the box, right in front of goal, and had the ball passed to her by Aylin Avilez, who muscled her way past two defenders. About seven minutes later, Diana Evangelista found the game-winning goal of the match, and the equalizer on aggregate. Evangelista struck from the top of the box, producing another world-class goal on the night.

It’s so hard to bet against Tigres.

Looking at these two sets of matches, both teams were down in their first leg. However, Tigres had the better response. In the last two playoff sets, as mentioned, Monterrey barely advanced. That shouldn’t take away from Monterrey’s talent, though. Rayadas has too much good, solid attacking talent to be barely squeaking by in games.

Tigres will welcome the return of Katty Martinez, and that only helps their attack. These are two incredibly solid teams with incredible attacks and goalkeepers. I would be shocked to see Tigres win by a blowout of any sorts, but I predict they will lift yet another trophy in their immaculate club’s history.

*All times in EST.