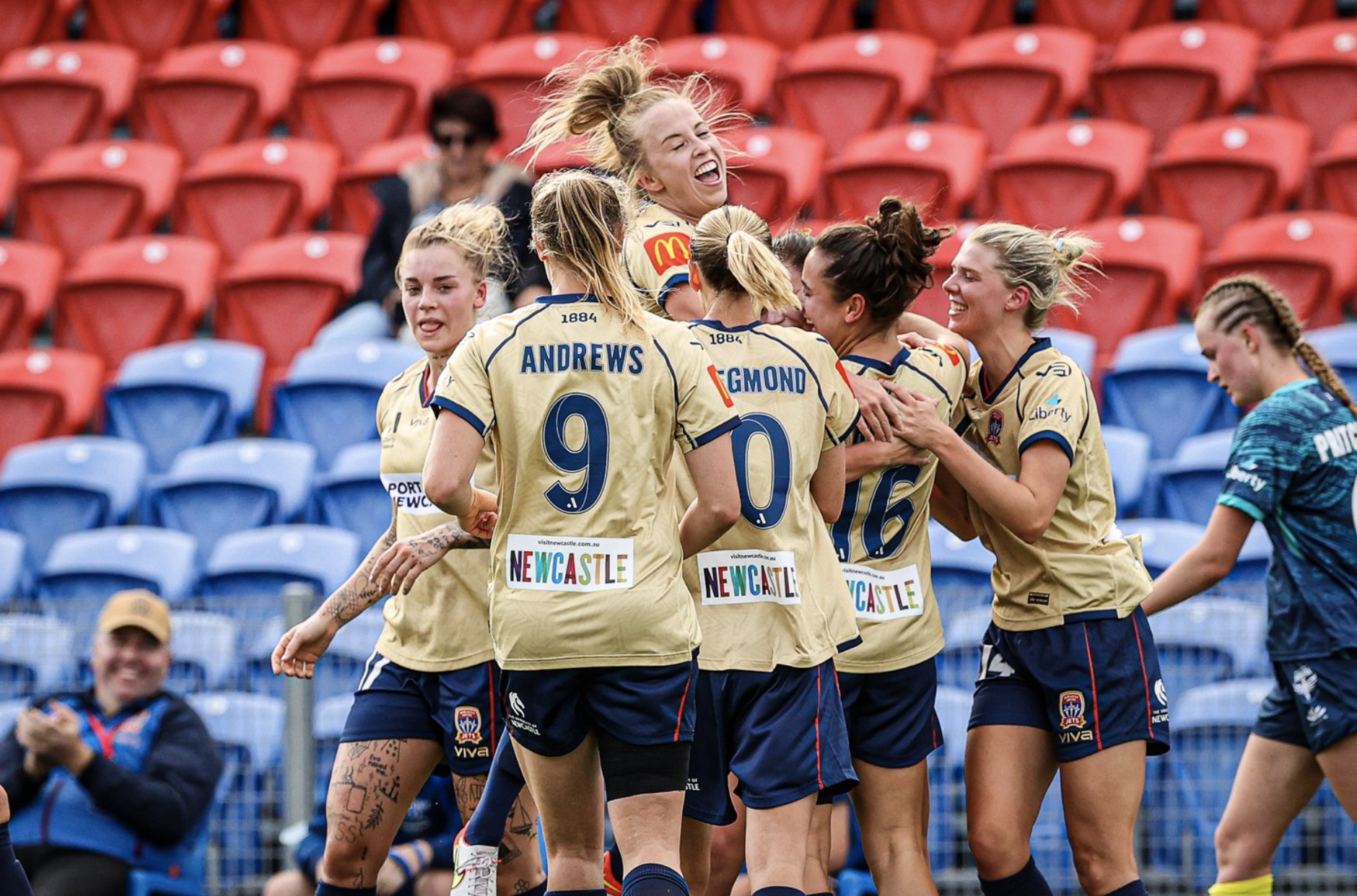 This weekend in Australia, Perth Glory defeated Brisbane once again and is in a three-way tie for the league lead with Melbourne Victory and Sydney FC. Take a look at what happened in Australia this week.

Newcastle Jets brought the expansion side Wellington Phoenix down a peg, after the Nix opened their inaugural Liberty A-League Women campaign with a draw against Western Sydney last week. Tara Andrews, who won a USL W-League Golden Boot with the Colorado Pride in 2015, scored a brace and Emily Van Egmond — who just joined her hometown club after gaining an early release from Orlando Pride — was hugely influential in the win.

Van Egmond made her debut with the Jets when she was 15 and has played in the U.S., Germany, Denmark and England. Van Egmond played in the NWSL with the Seattle Reign (2013), Chicago Red Stars (2014) and Orlando Pride in 2018, 2019 and this past season. She has over 110 caps with the Matildas. With 10 minutes remaining in the match, New Zealand youth international Ava Pritchard scored the first-ever goal for the Phoenix after a goalmouth scramble in front of the net.

In week one, Perth Glory scored two goals in the last few minutes of their game versus Brisbane Roar in Perth in a 2-1 victory, the club’s first victory in over a season, and leaving the Roar bewildered. The Glory stunned Brisbane again in a rare double of back-to-back wins against the same opponent, this time 1-0 in Queensland with a late winner from Alana Jancevski in the 86th minute, who hit a rebound from near the top of the box that deflected cruelly off of the Roar’s Brazilian import Mariel Hecher and floated into the goal past Roar goalkeeper Georgina Worth.

Perth’s new signing and Matilda veteran Lisa De Vanna again had to leave the game with a suspected hamstring problem.

The first edition of the Harbor City derby this year saw Sydney FC leave the Wanderers’ home with a 2-0 victory after a brace from Remy Siemsen, who was capped by the Matildas this year. Siemsen is now the early leader in the Golden Boot race with three goals, a title she shared in 2019-20 with Americans Kristen Hamilton, Morgan Andrews and former English international and former NWSL Boston Breaker Natasha Dowie, all who had seven goals. Sydney FC is now 16-2-1 (W-L-T) all-time against Western Sydney.

Melbourne Victory won the first Melbourne derby of the season after a 2-1 win over host side Melbourne City FC. Amy Jackson, who played collegiately at Florida International University and is in her sixth season with the Victory (and spent four years with City), headed the ball into her own net with no pressure on her just before halftime to give City the lead. Jackson was then red-carded in the 88th minute for pulling down City’s Holly McNamara who was breaking in alone on goal. Americans Cat Zimmerman and new signing and substitute Lynn Williams each scored a goal mid-way through the second half to give the Victory their second win of the season. Melbourne Victory now has six wins and seven losses in 13 derby games with City.

This was an interesting early season match between teams who finished fourth and fifth last season, with Canberra just pipping Adelaide to a semifinal spot; both teams also opened the season with a loss and this game was crucial to their playoff hopes with such a short regular season (12 games). Veteran Michelle Heyman gave Canberra an early 16th minute lead off of an assist from American Chelsee Washington. For Adelaide, Japanese import Nanako Sasaki scored her first goal in the A-League Women seven minutes later before assisting on Emily Condon’s winner one minute into second half injury time. Condon is a native of South Australia and is in her eighth season with the Reds.

We will have more on Sasaki in next week’s A-League Women review for Week 3.

American forward Shea Connors, who played at St. John’s University, has been playing in Queensland since 2019, mostly at the state league level; she scored 30 goals for Lions FC this past season (who won the Queensland NPLW and Women’s Super Cup titles in 2021) and then signed with the Roar for this season. This is her second stint with the Roar after playing two games in 2019-20.

After college, she played a year in Iceland with KR. Connors said about her signing, “I feel like I’m not just a visitor, I want to live here. I’m trying to make this my home. I get a lot of pride from representing Queensland and playing for the only [A-League Women] club here.”

Roar head coach Garrath McPherson said about adding Connors to the roster: “Shea is a proven goalscorer in the NPL Women’s competition and brings speed and attacking threat to our team. Like Mariel [Hecher — originally from Brazil], Shea is an example of the pathway into the W-League environment that the NPL competition provides.”

Next week, we will look at how other international players have utilized the NPLW to join the A-League Women, focusing on two Japanese players at Adelaide United.

Alex Chidiac joins Melbourne Victory; Kayla Morrison is out for the Season

Melbourne Victory has signed Matilda Alex Chidiac on loan from JEF United Chiba of the new WE league in Japan. Chidiac played with Melbourne City last season but began her career with Adelaide United in the 2014 season. She spent two years at Atletico Madrid in Spain, but did not play regularly and had some injury issues. She was a surprise omission from Ante Milicic’s 2019 FIFA Women’s World Cup squad. She currently has 17 full national team caps since her debut in 2015 against New Zealand.

Sunday, Dec. 19: Perth Glory is at home against Canberra United has been POSTPONED.