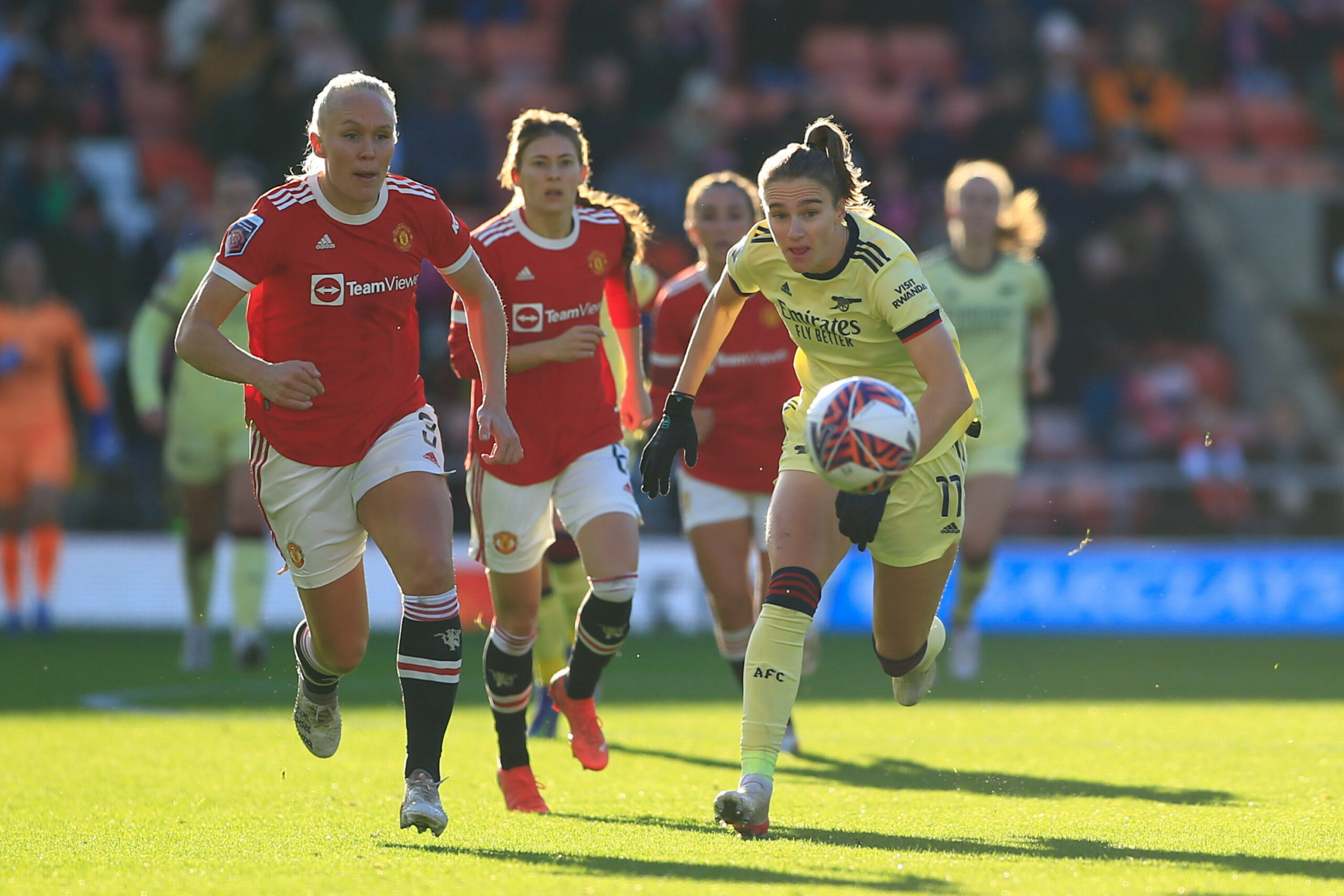 Wins from Arsenal and Chelsea this past weekend mean the top two in the FA Women’s Super League remain unchanged. Brighton and Tottenham — in third and fourth place — both suffered defeats on Sunday. Meanwhile, Manchester City got back to winning ways, and despite a tumultuous first few months of the season, remain within five points of third place. Catch up on all the weekend results and off-field news from Week 8.

Arsenal remained unbeaten in the league with a convincing 2-0 win over Manchester United on Sunday.

Vivianne Miedema opened the scoring after the halftime break with a low strike from distance that a diving Mary Earps couldn’t reach. It’s unclear if Earps was screened by the sun or her teammates, as her positioning appeared to be quite off prior to the shot.

Aside from giving her team the lead, it was a significant one for Miedema, as with the goal she became the first-ever FAWSL player to score against every team in the league that she has faced.

And just 10 minutes later, an attack from Miedema led to Arsenal’s second. The Dutch striker crossed the ball into the box for an incoming Katie McCabe, who was taken to ground by United’s Aoife Mannion. McCabe stepped up to the spot and buried her penalty with ease.

United captain Katie Zelem had a chance to get one on the board in the second half, but Arsenal goalkeeper Manuela Zinsberger had Zelem’s first time shot covered with a quick kick save.

Update on Tobin Heath’s injury — As reported by Goal’s Ameé Ruszkai, Arsenal coach Jonas Eidevall said that Tobin Heath is still dealing with a “small injury” which has kept her from playing for a few weeks. Heath hasn’t played since the United States’ friendly on Oct. 26, against Korea Republic, and for Arsenal since their Champions League match on Oct. 14, against Hoffenheim.

Birmingham City fire coach Scott Booth — On Friday, Birmingham City head coach Scott Booth was let go. Booth was hired in June of this year and managed his team through just the first three months of the league. As The Times’ Molly Hudson pointed out, considering the club’s low budget and considerable issues off the field last season (e.g. a lack of investment leading to poor recruitment, facilities and inadequate travel arrangements), this seems like a harsh decision just seven matches into the new season. Former professional player Darren Carter was named interim head coach on Sunday.

10,000 more tickets sold for FA Cup Final — Since last week’s roundup, an additional 10,000 tickets have been sold for the FA Cup final between Arsenal and Chelsea at Wembley Stadium on Dec. 5, bringing the total to 30,000 and counting.

FAWSL clubs in the UWCL — Last week in the UEFA Women’s Champions League group stage, Arsenal defeated HB Køge 3-0, while Chelsea squeaked out a 1-0 win over Servette FCCF, both at home. The group stage will continue with Matchday five in mid-December.

Manchester City 5, Aston Villa 0 — Though the first half was scoreless, Manchester City managed to put five past Aston Villa in the second 45′ on Saturday. Goals from Caroline Weir, Georgia Stanway, Hayley Raso (x2) and Lauren Hemp rounded out the scoring. Weir’s cutback to make space for herself on the first was lovely:

Chelsea 5, Birmingham City 0 — A Fran Kirby brace, and a Sam Kerr hattrick settled things on Sunday between Chelsea and Birmingham City. Kirby — who joined the Blues in the summer of 2015 — has now scored an incredible 100 goals for the London side. Meanwhile, Lauren James made her long awaited league debut for Chelsea in the match, after appearing for the Blues for the first time mid-week in the Champions League.

Everton 1, Leicester City 0 — A late goal by Simone Magill earned Everton their first win of the WSL season on Sunday. Striker Hanna Bennison’s skill to thread the ball through to Magill earns a second look too:

Reading 2, Brighton & Hove Albion 0 — Natasha Dowie got on the scoreboard early, and Emma Harries added a second late for Reading over Brighton on Sunday. It was a strong win for Reading, who sit firmly in the middle of the table, while Brighton remain in third place after the weekend.

West Ham United 1, Tottenham Hotspur 0 — Dagný Brynjarsdóttir broke the deadlock in the second half on Sunday to give West Ham the edge over Tottenham. After holding their own against Arsenal last weekend, it was a disappointing performance on the day from Spurs.