A totally serious, definitive analysis of the 2021 NWSL Championship 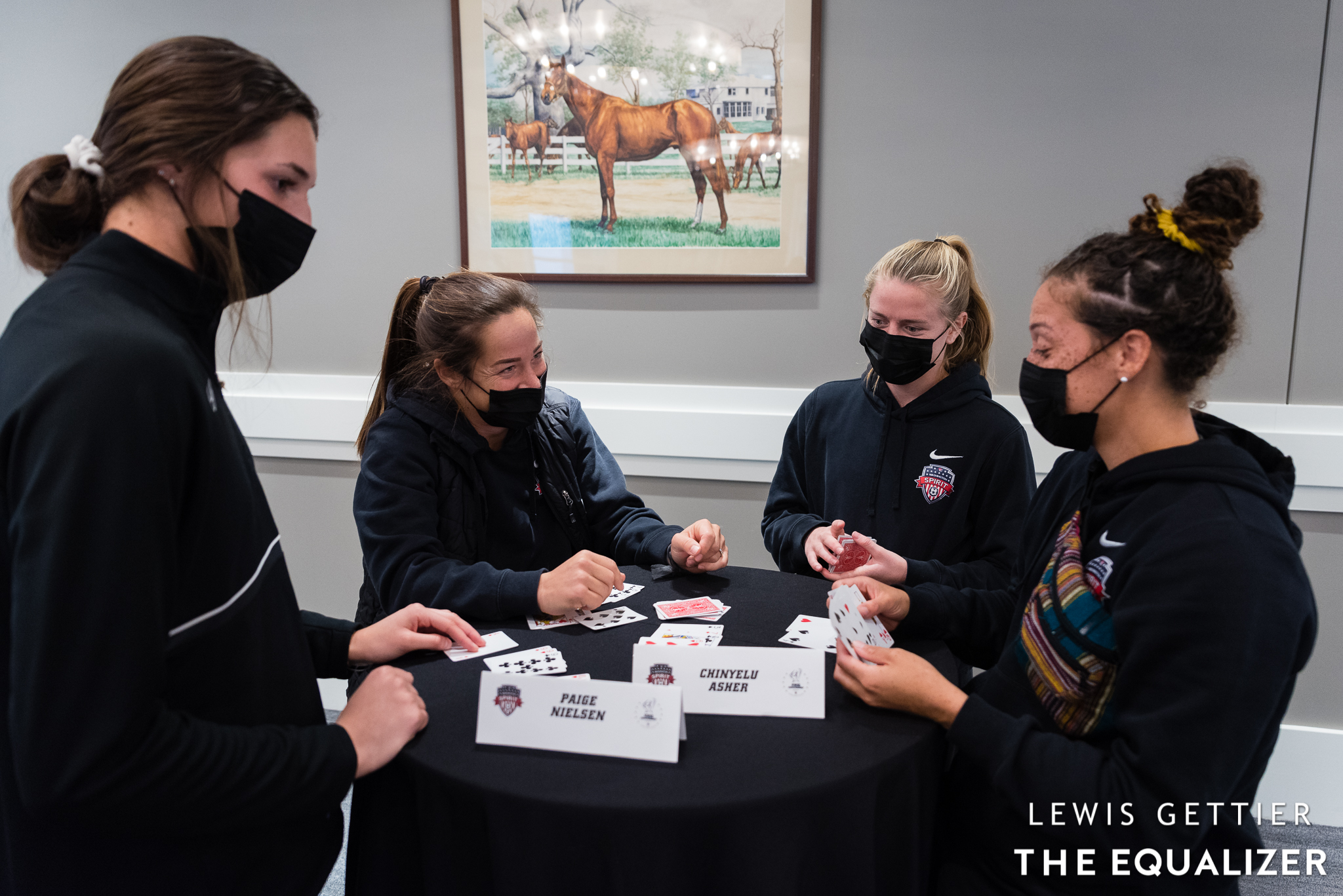 The 2021 NWSL championship is upon us. Many have already discussed the game from the standpoint of “tactics” and “analysis.” But soccer isn’t just Xs and Os. It’s about grit. Mettle. Creativity. Things you can’t measure with numbers.

Accordingly, at Thursday’s NWSL Media Day, I talked to the majority of the players on each team — I missed a handful due to the 45-minute time limit — and asked them a series of carefully designed questions in search of who has the edge when it comes to those intangibles.

This one is self-explanatory. Confidence is crucial heading into an important game — so which team is better at striking fear into the hearts of their opponents?

To assess this metric, I asked members of both teams two questions. First, which player on the opposing team they would least want to face in single combat, and second, which of their own teammates they would choose to be their ally in a fight.

The Spirit’s Andi Sullivan was confident in this area, answering “take your pick” when asked about teammates who might be good in a scrap. Spirit players had a range of answers for that question, including Emily Sonnett, Kelley O’Hara, Paige Nielsen, Trinity Rodman, and Ashley Sanchez. By far the most popular answer, however, was Sam Staab, and the players who gave that answer were notably confident. Staab agreed with her teammates, saying, “I’m not really intimidated by anyone.”

Interestingly, Staab was only named by one Chicago player, Ella Stevens, who said she “hated playing her in college” (Stevens went to Duke, Staab to Clemson). Other Red Stars named Sonnett, O’Hara, and Rodman as intimidating, with Nikki Stanton giving an evocative description of O’Hara: “You know how when sharks swim to get their prey, their eyes like, black over?” she said. “Yeah, she gets that. We call them shark eyes.”

When it came to who on their team would do well in combat, there was less agreement among the Red Stars. Tatumn Milazzo, Arin Wright, Sarah Gorden, Kealia Watt, and Alyssa Naeher were all given as answers, but only Naeher got an endorsement as ringing as Staab did, with Tierna Davidson reporting that the two had talked about it. “She had no hesitation when I asked her one time, that she’d [back me up].” Naeher, of course — along with Watt — is injured and won’t play Saturday.

The Red Stars were also the only team with players who volunteered that they would do poorly in a fight, with Rachel Hill reporting that she would run away, and Danielle Colaprico saying, “I would probably start crying and say, ‘why would you do that?’… I would never punch someone back.”

All in all, the Spirit handily take this category. Not only were players on both teams clearer about which Washington players are not to be messed with, but the three most intimidating players — Staab, Sonnett, and O’Hara — all play alongside each other on the back line.

The ability to think on your feet and come up with outside-the-box solutions is an excellent attribute for a soccer player to have. What better skill to measure that with than wilderness survival? I polled both teams on who would do well in the backcountry.

The Spirit had a harder time with this question, with Aubrey Bledsoe saying, “we don’t have too many outdoorsy people on our team.” Anna Heilferty, who has a degree in biology, was the most popular answer, followed by Camryn Biegalski. Notably — in a reversal from the previous question — it was only Spirit players who volunteered that either teammates nor they themselves would fare poorly off the grid. Kelley O’Hara said, without prompting, “I would never leave [Ashley] Sanchez alone in the woods.” When asked, other players echoed that answer unanimously, with the exception of Kumi Yokoyama, who enthusiastically raised their own hand.

The Red Stars were more confident. Zoe Morse was the name that came up the most, with Davidson calling her “very outdoorsy” and also “calm and rational.” Hill was similarly complimentary, saying, “I just think she’s a survivor. She would use everything and anything she could to live off the land, and she’d make it.”

However, it should be noted that Morse isn’t a starter for this team — though neither is the Spirit favorite, Heilferty. On the other hand, multiple Red Stars also pointed to Davidson, who, of course, does start, as Gorden’s partner in central defense.

Finally, as a group, Chicago is the more cerebral side; on the field, they’re defined by their excellent defensive organization, and off it, it seems they’re a team you’d want to bring along in a survival situation.

The tiebreaker is perhaps the most intangible of all the intangibles. By “cussedness,” I sort of mean “determination,” but I mean something a little more than that; everybody wants to win the game, but who’s willing to go through some true unpleasantness in pursuit of what is, when it comes down to it, a relatively minor reward?

To measure this, I asked players a simple question: How much money would they have to be paid in order to eat a cockroach?

Answers varied widely, with some players demanding sums in the millions. Chicago had three players ask for a million dollars or more — Gorden, Stevens, and Hill — plus head coach Rory Dames. Stevens, who said she would not eat what is possibly the grossest bug there is for less than $10,000,000, had the highest price on either team.

The two most willing Red Stars were Stanton and Katie Johnson, who said $50 and $20, respectively. Dames was not bullish on his team’s willingness to stomach this challenge, saying “I feel like there’d be five or six flat-out nos” on his team. Morgan Gautrat came closest to refusing altogether, initially asking for $10,000, but then admitting that if she was actually given a live one-inch cockroach, it’s possible her courage would fail her. Finally, Colaprico took a unique approach, asking if she could volunteer to eat additional cockroaches for more money, which suggests a level of creative thinking that can be a real asset on the soccer field.

Overall, the Spirit was much more daring in this respect. Yokoyama and Taylor Aylmer were the only two Washington players who gave sums in the seven figures, and it’s worth noting that those two were seated together, which may have influenced their joint price point of $5,000,000. The majority of Spirit players answered $500 or less, perhaps in part because many of them asked if they were allowed to cook or otherwise prepare the bug (the answer: the roach is given to you alive, but you can do whatever you want with it). Not unlike Colaprico’s tactic, this earns the Spirit some points for critical thinking.

The hands-down winner of this challenge, though — if there can be such a thing — was Rodman, who immediately answered that she would do it for free on a dare.

All things considered, the Spirit are the clear victors here. Their team’s average price was lower — $557,395.56, of the players I had time to talk to, compared to the Red Stars’ $724,451.11 — and having a star forward willing to eat a live bug on a dare would give any team an edge.

There you have it: the Spirit take the trophy here, winning two out of three categories. I think it’s worth pointing out, however, that the broader theme that emerges here is one of order versus chaos, calm versus recklessness. Washington has the more intimidating squad, but Chicago took down an intimidating team just last week in the Portland Thorns. Which one comes out on top is a question only time will answer.