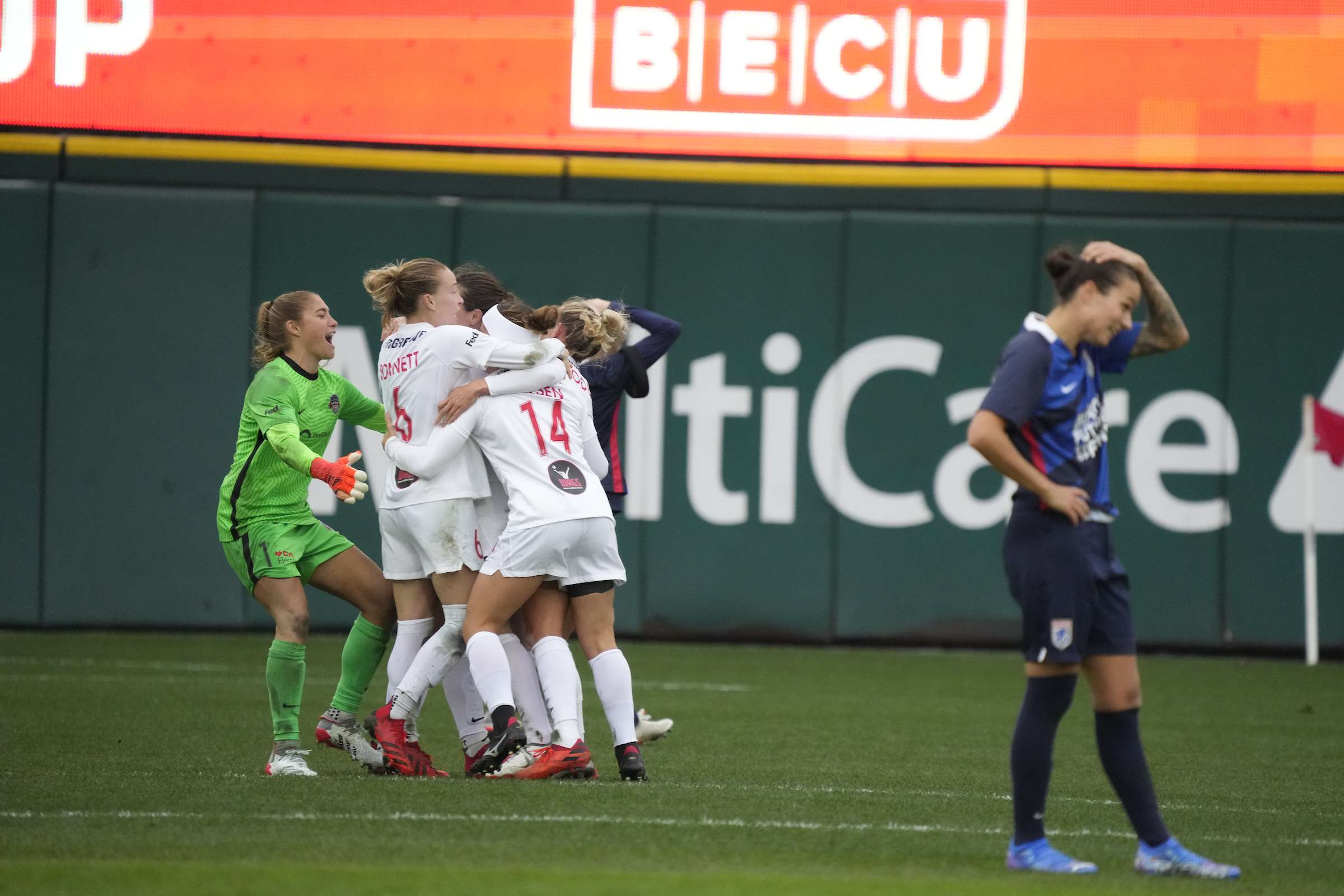 The Washington Spirit defeated OL Reign, 2-1 in Tacoma, Washington, to advance to the NWSL Championship for the first time since 2016. Meanwhile, the top-seeded Thorns fell to the Chicago Red Stars, 2-0 in Providence Park.

Either Chicago or Washington will win its first NWSL title on Saturday in Louisville (noon ET, CBS).

The Skinny: Trinity Rodman and Ashley Sanchez each scored to lift the Spirit past the Reign, 2-1. Eugenie Le Sommer opened the scoring for the Reign in the 3rd minute, scoring the fastest goal in NWSL playoffs history. Dzsenifer Marozsan and Megan Rapinoe combined down the Reign’s left side to get in behind, and Rapinoe found Le Sommer at the back post for the tap-in to put the Reign ahead.

Rodman answered nine minutes later, however, scoring against the run of play by finishing a long ball over the top from defender Sam Staab. The Reign pushed on from there, including in the final moments of the first half, when Le Sommer got in behind the Spirit’s back line, but her lobbed shot over Spirit goalkeeper Aubrey Bledsoe went just wide.

Sanchez scored the game-winner in the 68th minute, collecting her own rebound and chipping Reign goalkeeper Sarah Bouhaddi from an incredibly tight angle. The goal came two minutes after the Reign brought on Bethany Balcer for Quinn in an attempt to get more of a traditional No. 9 presence up top.

The Spirit’s victory is their third of the season in Tacoma, a staggering accomplishment for a young team against an experienced side with a significant home-field advantage (the converted baseball field at Cheney Stadium is one of the smallest in the NWSL and, on Sunday, was a significant factor following heavy rain). Washington will play either the Portland Thorns or Chicago Red Stars in the final on Saturday in Louisville.

Washington played the match without veteran and team original Tori Huster, who announced that she tore her Achilles tendon in last week’s first-round playoff win over the North Carolina Courage.

One Key Moment: This Ashley Sanchez goal will be discussed for a very long time.

Inside the Game: “Attitude” was the operative word for the Reign postgame. Rapinoe and Lauren Barnes, two Reign originals who experienced the Shields and heartbreak of 2014 and 2015, said that the team wasn’t up to the task on Sunday. Harvey said that the Reign struggled to match the Spirit’s intensity in the first half.

Tactically, that played out in such a way that the Reign’s dangerous front six had opportunities — a given considering the amount of talent there — but they put just three of their 23 shots on goal on Sunday. Washington pressured the Reign’s back line throughout the match and forced right fullback Sofia Huerta — who co-led the NWSL in assists in her found-again position — to sit at home, preventing her from adding another layer to the attack. Marozsan created multiple dangerous opportunities beyond her role in the Reign’s goal, finding Rose Lavelle at the back post in the first half and setting up Rapinoe in the second half. Finishing, however, was lacking.

NWSL Golden Boot winner Ashley Hatch was largely kept in check, but Rodman and Sanchez continued their red-hot form at the back end of this NWSL season. They each scored, and they were also responsible for the first line of pressure (along with Hatch). Washington’s press and counterpress has been effective over the past two months, and it made the Reign uncomfortable again on Sunday.

The Skinny: Chicago played without MVP candidate Mallory Pugh, who missed the match due to COVID-19 protocols, and lost leading goal-scorer Kealia Watt to injury in the first half-hour. The Red Stars set up in a defensive-minded formation to account for Pugh’s absence, and Watt’s exit from the game added to the adversity as the Thorns dictated play.

Katie Johnson changed things. Johnson replaced Watt in the 29th minute and scored from an impossible angle eight minutes later, beating Thorns goalkeeper Bella Bixby at the near post. The goal gave Chicago the lead against the run of play and left the Thorns to chase the game in the second half.

Sarah Woldmoe added an insurance goal in the 59th minute, unleashing a rip from just outside the box to beat Bixby.

The Thorns had significant absences of their own. Crystal Dunn, who announced last week that she is pregnant, missed the match — a planned absence. Fellow midfielder Lindsey Horan also missed the match, and that was a last-minute absence. Horan posted on social media before the game that she was hit in the eye during training on Saturday and temporarily lost her vision. Doctors held her out of Sunday’s match as a precaution.

Bixby also played the match following significant trauma this week (trigger warning). She shared after the game that her father died by suicide last week. The Rose City Riveters made her dad an honorary capo on Sunday.

One Key Moment: Johnson’s eventual game-winner, like Sanchez’s game-winner for Washington earlier Sunday, was both audacious and memorable.

Inside the Game: Chicago held firm defensively, which was the game plan from the start. CBS listed the Red Stars’ formation as a 3-4-2-1, with Vanessa DiBernardo and Danielle Colaprico sitting underneath Watt, who was the lone striker. The back line looked more like a four-back in practice, however, with Arin Wright staying tucked in to help on the left side.

Portland went after rookie right back Tatumn Milazzo, to some success. Thorns forward Sophia Smith drifted to Milazzo’s side in the first half in order to take advantage of the matchup, and Smith narrowly missed putting the Thorns ahead only minutes before Johnson’s opening goal for Chicago.

Chicago’s midfield held firm, with Woldmoe and Morgan Gautrat patrolling the space in front of the back line as they have throughout the season. The absences of Dunn and Horan were certainly felt, but rookie Yazmeen Ryan did well in her most important minutes to date. As a collective unit, Chicago limited Portland’s opportunities to the point that goalkeeper Cassie Miller was rarely called upon to make a big save.