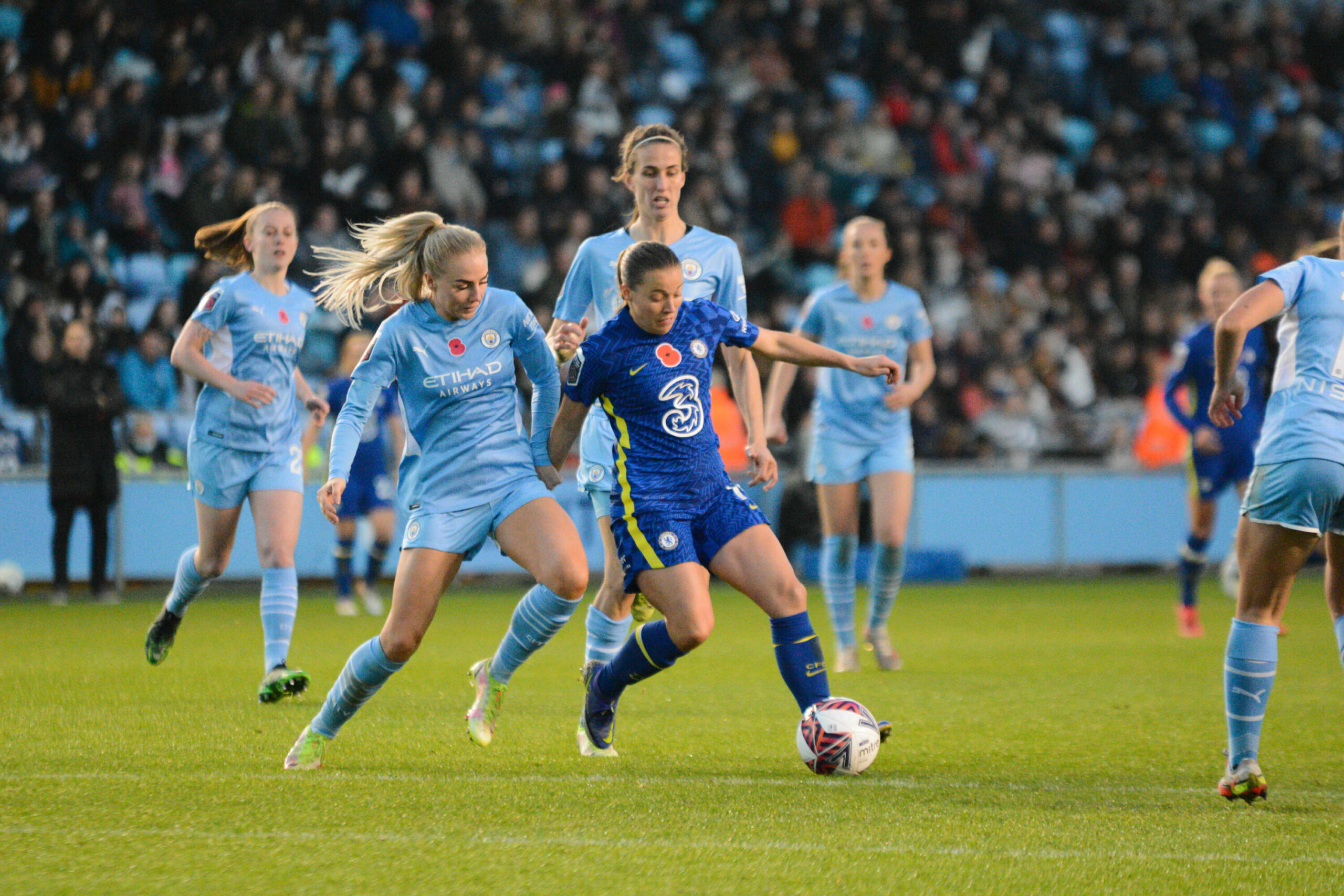 The third annual Women’s Football Weekend in the UK featured an exciting derby, numerous stoppage time goals, and movement up and down the FA Women’s Super League table.

A very fun and (most importantly, competitive) North London Derby took place on Saturday. Arsenal started on the front foot and dominated play, with chance after chance in the opening 45 minutes, including hits off the crossbar by both Beth Mead and Katie McCabe.

But with some good defending, and a stroke of luck, Tottenham were the team to strike first. In the 65th minute, Arsenal keeper Manuela Zinsberger saved two successive Spurs shots, but sloppy defending could not clear the rebound. Spurs striker Rachel Williams made no mistake with forcing the loose ball into the back of the net.

Just as it looked like Arsenal were headed for their first loss of the WSL season, Vivianne Miedema had other ideas. In stoppage time, Miedema got the jump on defender Shelina Zadorsky and powerfully headed a floated in corner kick to equalize.

So close to a historic win, Spurs would have to settle for sharing the points on the day. But compared to late September’s 5-1 thrashing by Arsenal in the FA Cup, Spurs turned out a much better performance on Saturday, making the derby match a meaningful one and continuing their strong start to the WSL season.

Manchester City were thoroughly beaten by Chelsea at home on Sunday. Though the home side had a number of chances on goal and decent spells of possession throughout the match, a calamity of errors led to their undoing.

Jessie Fleming opened the scoring just 63 seconds into the match, when keeper Karima Taieb’s bad backpass was intercepted by the Canadian, who made no mistake with her finish. Yes, with Ellie Roebuck and Karen Bardsley both out with injuries, Taieb is the third choice keeper for City, but the injury excuse just won’t cut it this time – errors like these are entirely avoidable.

City had legitimate shouts for a penalty kick in the first half, when a bad back pass of Chelsea’s own lead to a late challenge by keeper Ann-Katrin Berger on City’s Lauren Hemp. But no penalty was given.

Instead, a sloppy City giveaway – this time by Georgia Stanway in the middle of the park – lead to some nice combination play by Ji So-Yun and Guro Reiten, and a finish by Sam Kerr for Chelsea’s second.

Things continued to go sideways for City in the second 45′, as Chelsea added two more shortly after the halftime break. City had a number of failed chances to clear the danger in the penalty area on Chelsea’s third, but the ball fell to Fran Kirby, who curled it passed Taieb. On the fourth, captain Magda Eriksson easily rose above her defender to head a corner kick home.

Though the errors were plentiful through 90 minutes, the most puzzling moments on the day may have been post-match, in City manager Gareth Taylor’s press conference. Taylor – whose side has just seven points from seven matches, and sit in 9th – defended his tactics, and said that lopsided losses to Arsenal and now Chelsea were “freakish results.”

CBS Sports acquires FAWSL rights in the U.S. — Announced on Monday, CBS Sports will be the exclusive U.S. English-language rights holder of the WSL for the 2022-2023 and 2023-2024 seasons. With the deal, WSL matches will be available across Paramount+ and CBS Sports Network.

20,000 Tickets sold for December’s FA Cup Final — With the match just three weeks away, the FA announced that 20,000 tickets have already been sold for the upcoming FA Cup Final between London rivals Arsenal and Chelsea at Wembley Stadium.

WSL Teams in the Champions League — Last week, Arsenal defeated Denmark’s HB Køge 5-1, while Chelsea defeated Swiss club Servette FCCF 7-0 in UWCL Matchday 3 action. Both clubs will play the return matches at home this week for Matchday 4 (and you can catch the action for free on DAZN’s UWCL Youtube channel).

Everton 1, Manchester United 1 — Ella Toone’s 10th minute goal gave United the lead early, but a plucky Everton stayed in the match and equalized in the second half. Everton’s Simone Magill managed to poke the ball just out of the reach of United keeper Mary Earps for the wacky equalizer.

Brighton & Hove Albion 1, Leicester City 0 — Brighton got the win over Leicester on Sunday with a dramatic, 93rd minute free kick winner by teenager Maisie Symonds. The Seagulls’ great start to the season continues, as with the win they leapfrog Spurs and now sit in third.

West Ham 2, Reading 2 — A flurry of goals produced a fun draw between West Ham and Reading on Sunday. Lisa Evans opened the scoring for her first in a West Ham shirt, and Grace Fisk doubled the lead inside the first 45′. But an own goal by West Ham opened the door in the second half, and a stoppage time equalizer by Reading’s Emma Harries ensured the points were shared.