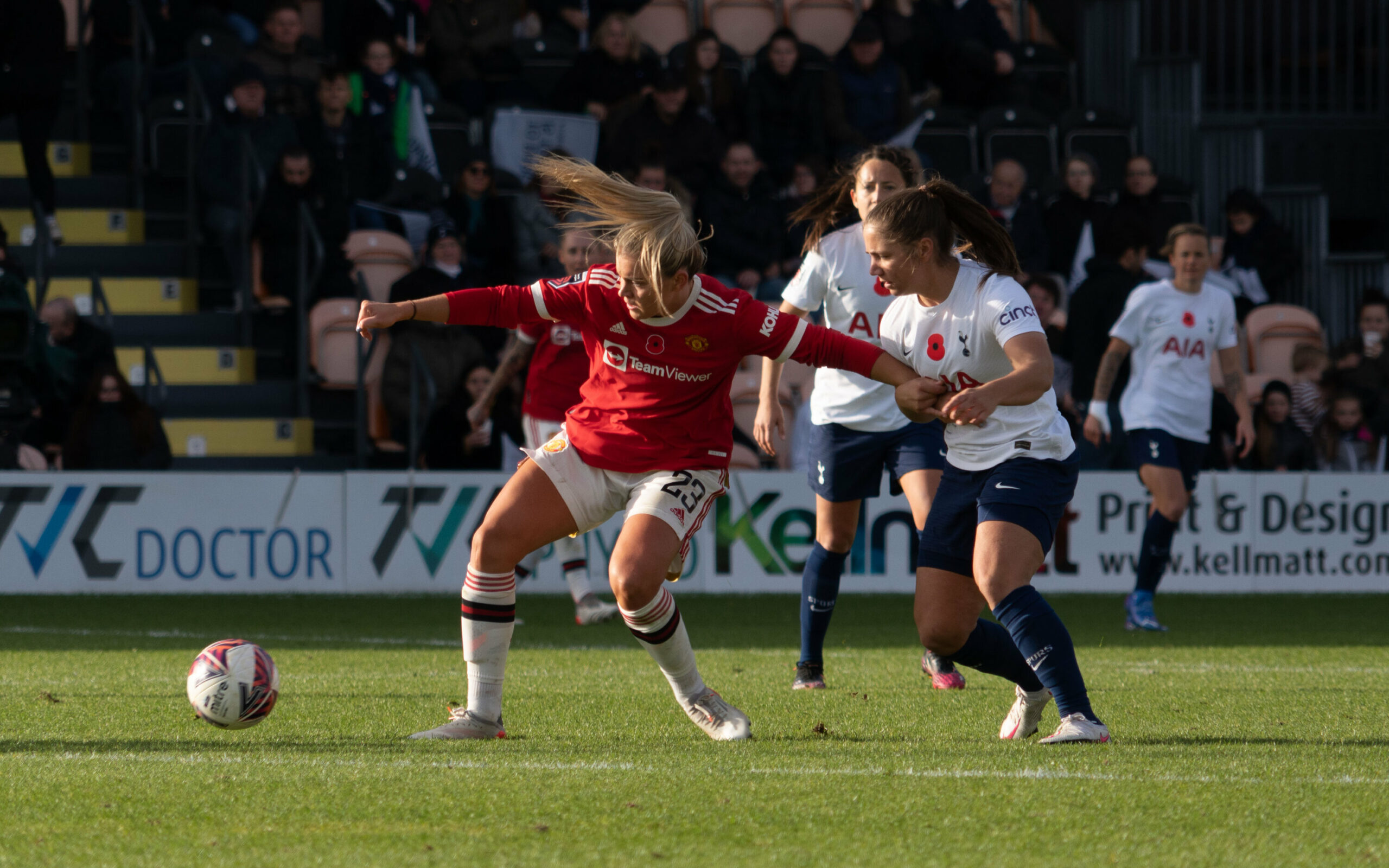 After four long weeks, the FA Women’s Super League returned this past weekend. The top three remained intact, while there was movement further down the table.

Manchester United squandered a lead that stood for 45 minutes on Sunday, as Spurs clawed their way back in the final moments of the match to share the points.

Leah Galton came close to opening the scoring in the first half, when she found herself unmarked on the edge of the six-yard box. But Spurs defender Ria Percival was in the right place, and was able to block her shot. But United had another chance before the break, and this time Alessia Russo made no mistake. Russo – who was crucial in creating Galton’s earlier chance – once again muscled her way through defenders on the wing, and at an incredibly tight angle, managed to squeeze her shot passed Spurs keeper Tinja-Riikka Korpela. It was the University of North Carolina alum’s third goal of the season for United.

Both Korpela and United keeper Mary Earps had to stay sharp in the second half, with Korpela notching a diving save on Kirsty Hanson, and Earps later denying Kit Graham’s outstanding long-range bomb with a diving save of her own.

Just as it looked like United would be taking three points with them back home, Spurs had a last-ditch free kick deep into stoppage time close to the halfway line. Percival lined up, and her strike made it through the crowd of both sides – completely untouched – and past a diving Earps for the equalizer!

Overhaul at Everton — After a mixed start to the season (2 wins, 3 losses), Everton parted ways with manager Willie Kirk on October 13. Sarvar Ismailov, who was (among other roles) Sporting and Commercial Director at Everton Women, also left the club, as he stepped down last week for personal reasons. Former Olympique Lyonnais Féminin coach Jean-Luc Vasseur was hired as Kirk’s replacement.

FA Cup Final is set — Last weekend, Arsenal defeated Brighton and Chelsea defeated Manchester City (both 3-0) to lock in an all-London 2020/2021 FA Cup final. The final will be played on Sunday, December 5 at Wembley Stadium.

Arsenal Advisory Board — In case you needed a reminder of how much work still needs to be done, Arsenal released a photo of their 12-man advisory board, tasked with “key strategic issues facing the Club” including “the growth of the profiles of Arsenal Women and Women’s Football more generally.”

Arsenal 4, West Ham 0 — Kim Little’s brilliance was on full display on Sunday, as she scored a brace in Arsenal’s 4-0 blanking of West Ham. It was a big milestone for captain Little, as she reached 50 total WSL goals with her brace. Beth Mead, and an own goal by West Ham’s Grace Fisk rounded out the scoring.

West Ham and Canada supporters will be worried to hear that Adriana Leon has “sustained a potentially serious foot injury that is currently being assessed,” as reported by the club. The forward was coming off a strong international break, where she scored a brace in Canada’s 5-1 win and the game winning goal in the subsequent 1-0 win, both over New Zealand.

Manchester City 4, Leicester City 1 — Despite conceding inside the first minute of the match, Manchester City managed to claw their way back to a win on Sunday with goals by Caroline Weir, Keira Walsh (the stunner below), Lauren Hemp, and Laura Coombs. City’s list of injured players continues to be long, with Lucy Bronze, Ellie Roebuck, Steph Houghton still unavailable.

Reading 3, Birmingham City 0 — Natasha Dowie opened the scoring on Sunday for Reading against Birmingham, and Deanne Rose followed it up with a brace – the Canadian international’s first goals as a professional.

Chelsea 1, Aston Villa 0 — Jessie Fleming scored the match-winning goal on Saturday against Aston Villa. It’s Fleming’s second for the Blues, who remain second in the table, closely behind Arsenal.