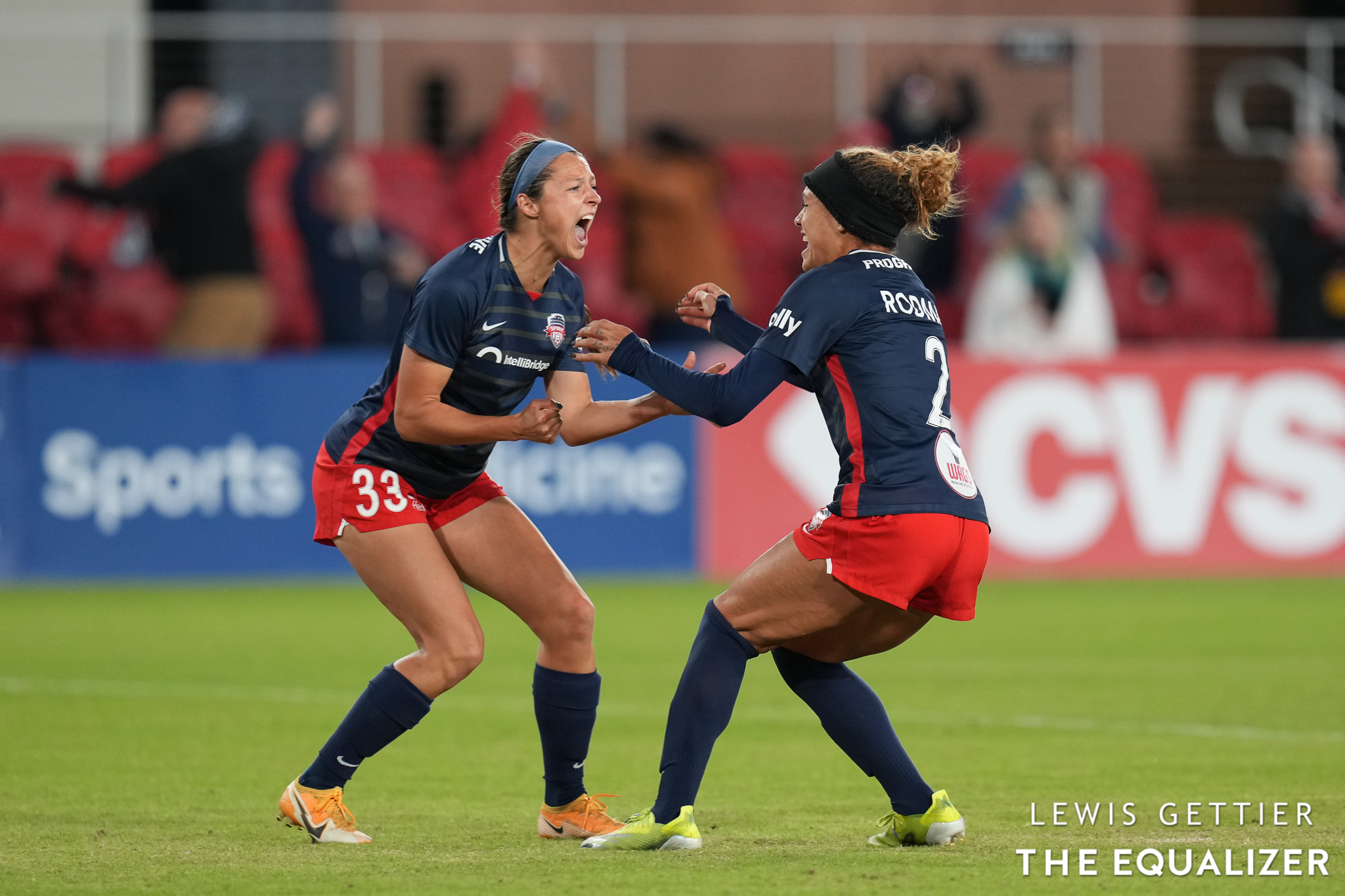 Sunday’s games marked the first time since inception in 2013 that the NWSL has held a round of playoffs before the semifinals. Here’s how it played out:

The Skinny: Ashley Hatch scored the game’s only goal in the 113th minute to lift the Spirit past the Courage, securing Washington’s first playoff win since 2016 and ensuring there will be a new NWSL champion for the first time since 2017. Hatch, who won the NWSL Golden Booth with 10 regular-season goals this season, scored the winner on a rare rebound conceded by Courage goalkeeper Casey Murphy on Trinity Rodman’s shot.

Opta Stats credited Murphy with 13 saves. Murphy previously held the record for saves in a playoff game, set when she denied 11 shots for the Reign in the 2019 semifinal against the Courage. Spirit goalkeeper Aubrey Bledsoe was credited with eight saves. Both goalkeepers made several spectacular saves, with Bledsoe also getting assistance from the woodwork, which denied the Courage a goal in one of their better buildups on the night.

One Key Moment: Hatch’s goal is the obvious moment, but the collective goalkeeping on display on each end of the field kept what could have been a goal-fest scoreless deep into extra time. Picking just one save from the bunch is a difficult task, but thinking about the end result, Bledsoe’s saves seem all the more important. For the pure reaction time needed for this save on Jess McDonald — and because it held off a surge from the Courage in this stretch which included Debinha’s effort off the post — this 54th-minute stop from Bledsoe might be the most important.

Inside the Game: The goalkeeping is a topic on its own, and for good reason. Murphy and Bledsoe cumulatively put together the best goalkeeper duel the NWSL has ever seen. Both of those performances should be remembered for a long time (and, yes, are part of wider bodies of work this season which should earn them call-ups to the United States national team).

Tactically, there was also quite a bit going on. The Courage put in their best defensive shift in a long time, chiefly because there were few glaring mental lapses and a more complete performance. Some lingering finishing issues remained for the attack — in many ways thanks to Bledsoe, but also evident in Debinha hitting the post and Lynn Williams putting a close-range shot over the bar in the 83rd minute. They end the year with only one win from their last 10 matches.

Where the Spirit found success was through patience in their buildup. Twice early in the match, Washington played through North Carolina’s midfield lines with ease right off a goal kick initiated by Bledsoe. The first such sequence saw the Spirit go from Bledsoe’s goal kick to a near-tap-in opportunity for Hatch in only for passes, all vertical moves which eliminated several Courage players at once.

The match began to open up later in the half, which acting Spirit head coach Kris Ward admitted afterward likely favored North Carolina. Amy Rodriguez got in behind to force one of Bledsoe’s other contenders for save of the night, in the 33rd minute, and the Courage looked like the more threatening team for the final 15 minutes of the first half and for large stretches of the second half. Fullbacks Merritt Mathias and Carson Pickett managed to push higher in support, and Debinha, in particular, found the ball to combine and create.

Ultimately, the Spirit benefited from the outside-inside combination play, with Kelley O’Hara switching play to Andi Sullivan, who found Rodman for the initial shot on Hatch’s goal. Hatch has been known for being in the right place at the right time to run up her goal tally this season, and that is exactly what happened on Sunday’s goal.

The Skinny: Mallory Pugh’s first playoff goal was the game-winner for Chicago in the 61st minute. Gotham goalkeeper Kailen Sheridan attempted to play centrally out of the back, passing to McCall Zerboni, who was facing goal. Zerboni was pressured and dispossessed, which afforded Sarah Woldmoe time on the ball to find Pugh, who curled her right-footed shot into the far, top corner.

The loss brings an end to Carli Lloyd’s 16-plus-year professional career. Lloyd previously announced she would retire after the season. Gotham is now 0-2 all-time in NWSL playoffs. The only previous NWSL playoff appearance for the franchise, then known as Sky Blue FC, was in 2013, the league’s inaugural season. Sky Blue lost that semifinal to the top-seeded Western New York Flash, which featured Lloyd (who scored both goals in the Flash’s win).

One Key Moment: Pugh’s game-winner was the big moment, and it is one which she said, in a postgame interview on CBS Sports Network, that the team worked on in training the week prior. Chicago practiced pressing Gotham on their corner kicks, and it paid off.

Inside the Game: Gotham head coach Scott Parkinson said Chicago was more pragmatic than he expected, keeping left back Arin Wright tucked in and maintaining a numerical advantage centrally to stymie Gotham’s typically dangerous front three. Gotham managed just two shots on goal and, aside from an early opportunity which Ifeoma Onumonu created by playing off the back shoulder of Chicago’s back line, the visitors hardly threatened Cassie Miller’s goal.

Chicago also owned the midfield. Morgan Gautrat, Vanessa DiBernardo, and Woldmoe got the better of Gotham’s trio of Allie Long, McCall Zerboni and Nahomi Kawasumi. Both Long and Parkinson acknowledged Chicago’s ability to cut off passing channels. Gotham matched Chicago’s intensity in the first half, but the Red Stars emerged as the superior side in the chess match in the second half, when the game opened up even before Pugh’s goal.

Chicago played without Casey Krueger, who still wasn’t yet match read following an illness. Tatumn Milazzo filled in at right back and helped keep that Gotham front three in check. Gotham went with Estelle Johnson over Mandy Freeman at center back, while returning Imani Dorsey to the starting lineup at left back. Dorsey made a significant recovery run and clearance in the first half to deny an early opportunity for Chicago.

‘We’re playing but we’re not forgetting about this’: NWSL players look at playoffs through different lens
An abrupt ending for Gotham’s season, Lloyd’s career