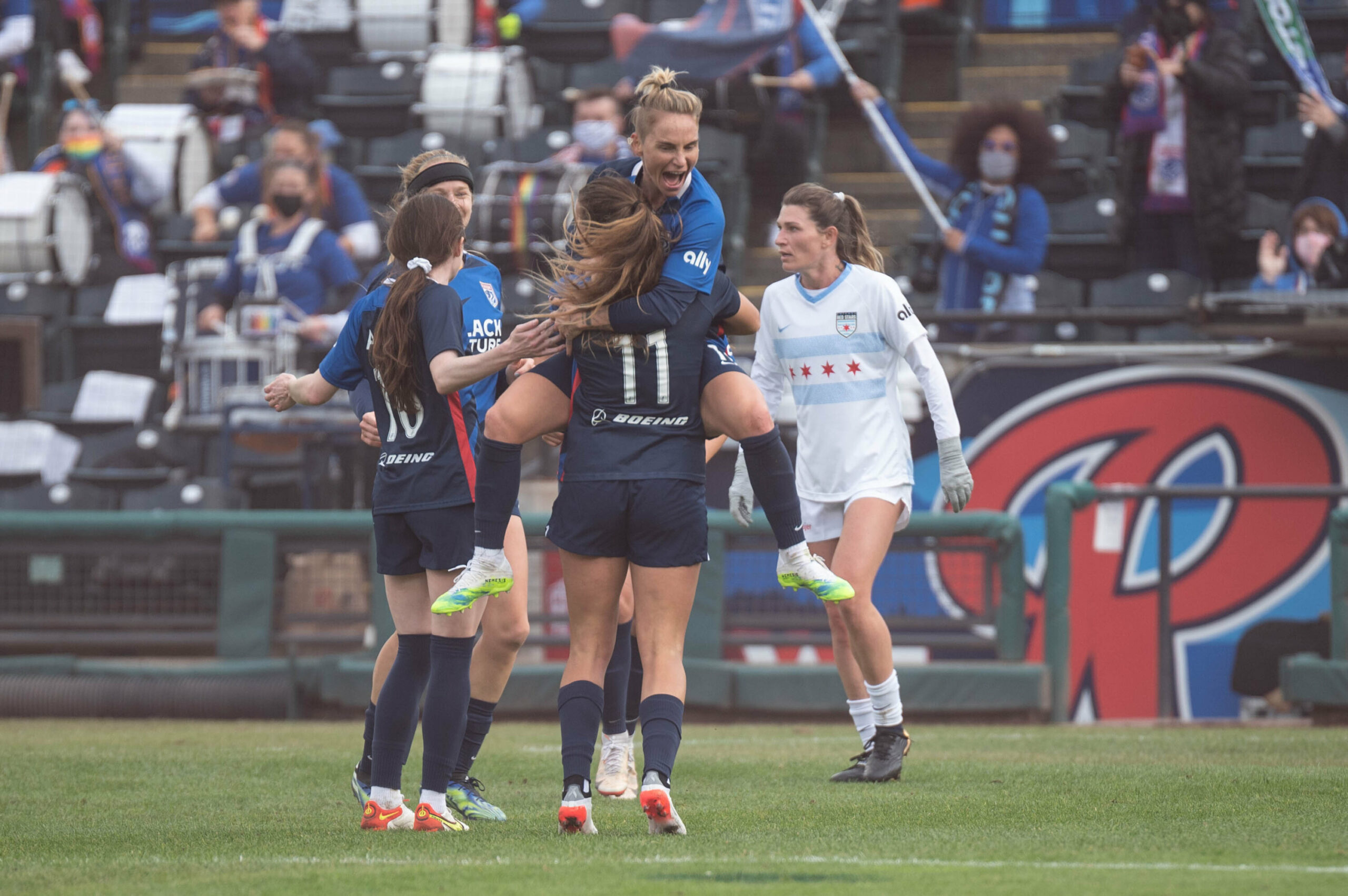 Three games took place in the National Women’s Soccer League on Sunday as moments of solidarity continued from players in the wake of ongoing systemic abuse exposed in recent weeks and months.

OL Reign’s 3-2 win over the Chicago Red Stars, combined with the Portland Thorns’ scoreless draw against Kansas City, means the Reign are 1 point behind their Pacific Northwest rivals heading into Wednesday’s derby at Providence Park. The Houston Dash’s 4-1 win over the North Carolina Courage leapfrogged Houston into third. Here is what happened on the field on Sunday:

The Skinny: The Red Stars started off on the front foot, pressing high and disrupting Reign’s passing game. They were rewarded roughly fifteen minutes in when Kealia Watt found Mallory Pugh on top of the box. Pugh did well to slot it past several defenders into the back of the net for the opener. Chicago stayed strong for a while but thirty minutes in, something awoke Jess Fishlock and she scored a certified banger. Her equalizing goal noticeably changed the Reign’s play, snapping them back into the game. Just a few minutes later Fishlock would score her second, heading in Sofia Huerta’s brilliant cross at the back post.

The home side went into halftime with the lead and came out looking for more. Not long into the second half, Rose Lavelle would score her first for the club, utilizing the magical left foot we are so used to see on the world stage.

Chicago did not give up though and managed to pull one back with a banger of their own. It was Tatum Milazzo’s first goal for the Red Stars, but it wasn’t enough to mount a full comeback.

OL Reign held on for all three points, officially clinching their spot in the playoffs, but still looking to win the shield.

One Key Moment: Jess Fishlock’s goal changed the game for OL Reign and it could not have been more perfectly placed.

Inside the Game: Sofia Huerta assisted all three of her side’s goals. When they got her high and wide, it changed everything, making the Reign far more dangerous on the attack. At the same time, they had several defenses lapses as a team that allowed Chicago into the game. Speaking with Lauren Barnes after the match she stated that the happenings around the league have taken a large mental toll, and she personally saw it in her performance during the match.

The Skinny: Houston moved into third place on a tiebreaker, leapfrogging North Carolina, with an emphatic 4-1 home victory over the Courage. Rachel Daly scored twice to bring her season tally to nine goals, equal with OL Reign’s Bethany Balcer and the Washington Spirit’s Ashley Hatch for the league lead.

One Key Moment: Visalli’s immediate equalizer was a rallying point for the Dash. Groom had skied a golden opportunity over the bar seconds before McDonald opened the scoring, and that looked like a bad omen for a Dash team which has had some issues getting results at home. Visalli getting Houston back on even terms within two minutes set the tone for the rest of the match.

Inside The Game: Houston flipped the script on the traditional Courage recipe for success: the Dash outshot North Carolina 19-9 and tripled the Courage in shots on goal. It was a dominant effort from Houston, who particularly enjoyed space to play in wide areas against North Carolina’s narrow box midfield. Daly’s first goal, and Groom’s goal two minutes later, each were results of the Dash winning 1-v-1 battles in wide areas.

North Carolina struggled defensively, especially trying to build out of the back. The midfield remains a question mark as well. Amy Rodriguez, who is one of the best No. 9s in league history, has solidified herself in one of the double-10 roles of this box formation. It is hard to believe the Courage traded for her midseason to play her out of position, although some of that explanation is surely attributable to Sam Mewis still being on the sideline with a right knee injury. It’s odd to not see the Courage at their best in October (and they haven’t quite been for most of the year), but there have been much more important things at play off the field in North Carolina.

The Skinny: The Thorns turned around from an emotional midweek game at home — one which saw the announcement of general manager Gavin Wilkinson being put on leave only hours before kickoff — to travel to Kansas City for the first time this season. Kansas City, after a long layoff, began a grueling stretch of five games in the final 21 days of the regular season.

Narratives of a recent trade between the two teams put Kansas City goalkeeper Adrianna Franch at the center of this matchup, and she delivered as an influential figure in the scoreless match. Franch made a huge, goal-line save late in the match, followed by Christine Sinclair putting her penalty shot off the post in the final minutes.

One Key Moment: Sure, there was the PK, but Franch’s save on Morgan Weaver’s header in the 75th minute was spectacular.

Inside the Game: The Thorns looked tired, understandably. Combine that with the small pitch in Kansas City which many teams have found difficult to play on, and the scoreless draw is not such a surprise, in a vacuum, even if this was a first-vs.-last matchup. Each team had only two shots on goal. Kansas City’s best opportunity was what looked like a go-ahead goal from Kristen Hamilton, but she was ruled to have fouled Becky Sauerbrunn prior to the shot.