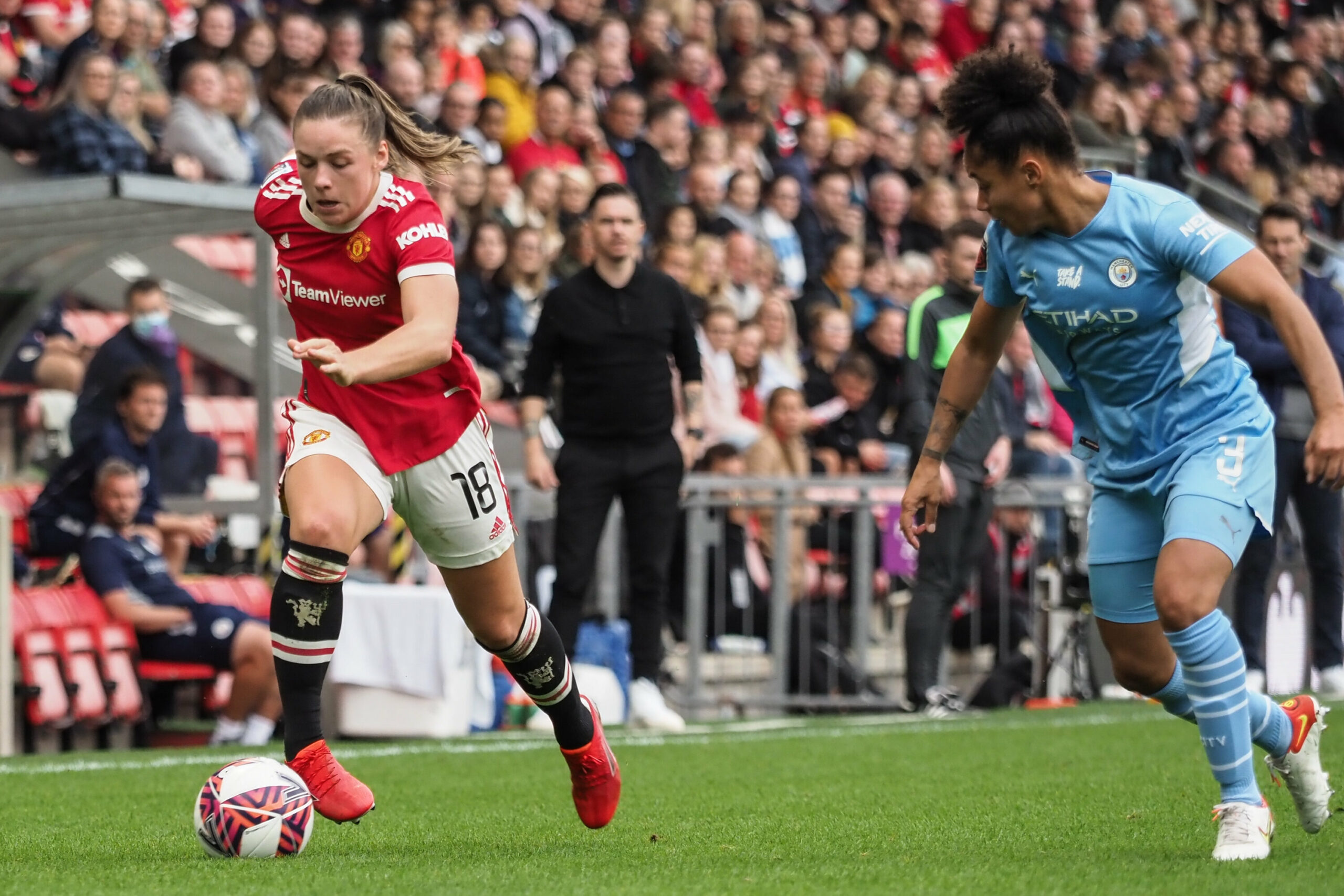 Arsenal bounced back from a mid-week Champions League defeat on Sunday to remain perfect in the FA Women’s Super League, while some late chaos ensured the season’s first Manchester derby was one to remember!

Saturday’s Manchester derby was a delight, with drama and lead changes throughout. Still amidst an injury crisis, City manager Gareth Taylor elected to play midfielders Jill Scott at center back and Georgia Stanway at right back.

City started strong, and had the best early chance through a half-volley from Janine Beckie in the 13th minute. Her shot forced a diving reaction save from United keeper Mary Earps, who was superb on the day.

Despite the strong start, disaster struck in the 35th minute for City, when Stanway earned a deserved red card for a late, and (very) high challenge on Leah Galton. But just minutes after the sending off, Bunny Shaw headed in a cross from Demi Stokes to put the 10-player City ahead.

Things took a chaotic turn late in the second half, as three goals were scored in the span of ten minutes. A quickly taken corner kick by United found Ella Toone, who crossed the ball to Lucy Staniforth. She managed to cheekily flick the ball in at the front post for the equalizer. Just minutes later, United took the lead when Alessia Russo tucked a low shot just past City keeper Karima Taieb. It was an emphatic moment for Russo, who missed most of last season with a hamstring injury.

But just as United started to show as the more dominant side, City clawed their way back. Jess Park hit a rocket of a shot towards the upper 90 that Earps remarkably was able to get a hand on. However, the rebound went off of Earps’ glove, ricocheted off the crossbar, and landed directly into the path of Ellen White, who tapped it in to equalize at two all.

The single point may feel like a cause for optimism for United, who adapted well and hung in after the first half red card. They sit in ninth place in the table. For United, after playing up a player for 55 minutes and taking the lead, the point signifies a missed opportunity to earn their first victory over City in the WSL, but the squad maintains their fourth place standing.

Stanway receives social media abuse after red — Stanway apologized on Twitter for Saturday’s tackle and revealed she’s been receiving abusive messages on social media in the day since. Galton responded, accepting her apology and urged that the messages stop. The current reckoning in women’s football must address this type of abuse too.

UWCL continues this week — It was a rough going in the Champions League group stage last week for the WSL clubs. Arsenal lost 4-1 to Barcelona, and it could have been worse if not for a late penalty save by Manuela Zinsberger on Alexia Putellas. Chelsea trailed Wolfsburg for much of the match, but scored a late equalizer to draw 3-3. This week, Chelsea travel to Turin to play Juventus on Wednesday, while Arsenal play Hoffenheim at home on Thursday.

Reading 3, Aston Villa 0 — Goals from Amalie Eikeland, Rachel Rowe, and Natasha Dowie on Sunday were Reading’s first goals of the season and earned them the win over Aston Villa on Sunday – their first points of the season. Deanne Rose recorded two assists in the match.

Brighton & Hove Albion 2, Tottenham Hotspur 1 — Brighton ended Tottenham’s perfect start to the season on Sunday, as a late goal for Spurs by Kit Graham was not enough to nullify goals by Brighton’s Lee Geum-min and Victoria Williams. Spurs striker Rachel Williams earned two yellows and was sent off in the 76th minute.

West Ham United 1, Birmingham City 1 — The points were shared on Sunday in London, as a classy lob by West Ham’s Claudia Walker was nullified by an equalizer from Birmingham’s Louise Quinn.

Arsenal 3, Everton 0 — A Katie McCabe strike, a Lotte Wubben-Moy header, and a golazo from Frida Maanum set Arsenal apart on Sunday over Everton. The win continues the Gunners’ perfect start to the season.