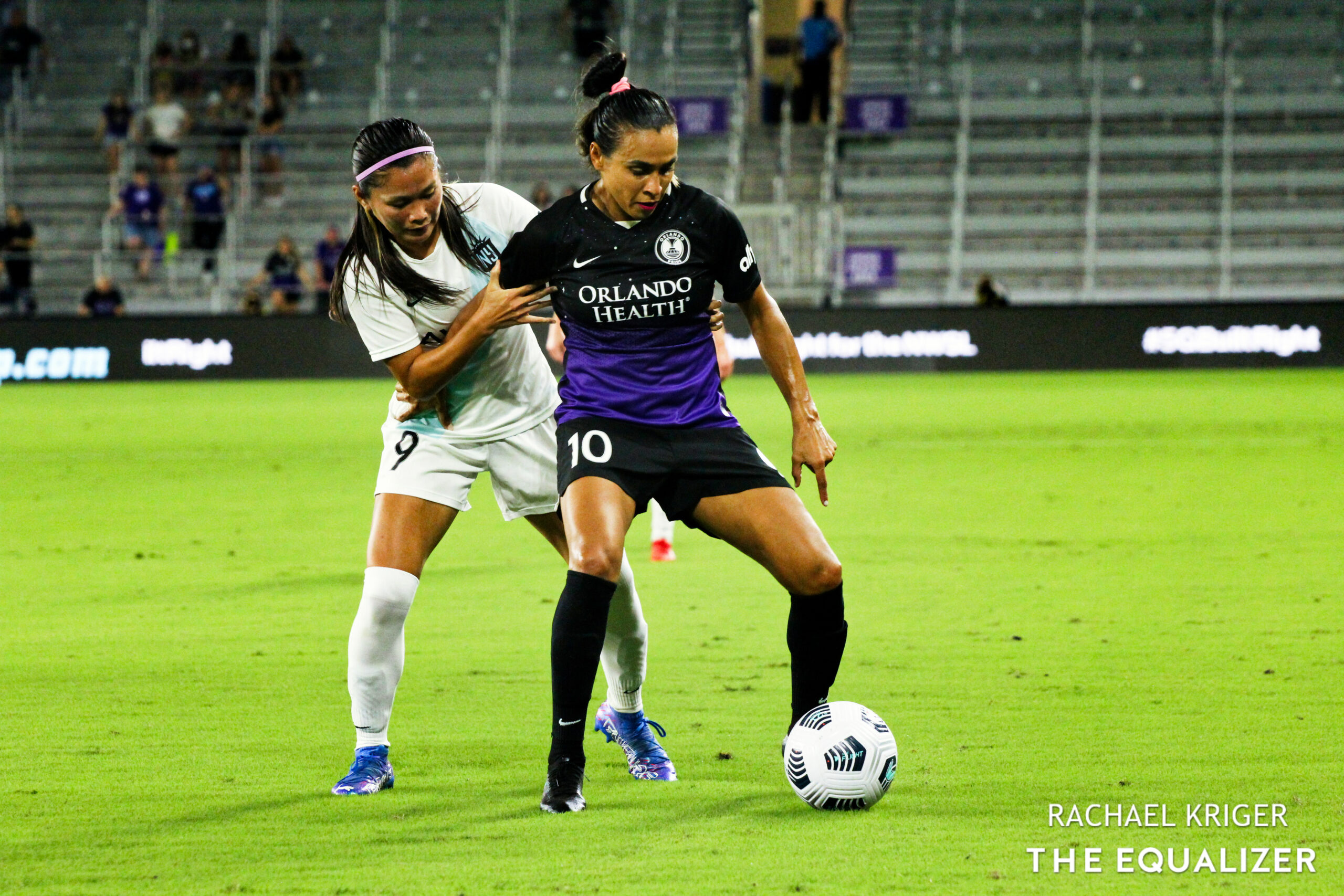 The games were played to the ongoing backdrop of players fighting for protection in their own league, the topic which dominated postgame press conferences once again. Mana Shim, one of the alleged victims who spoke out against now former North Carolina Courage head coach Paul Riley, was in Orlando and joined players on the field in the solidarity act of stopping play six minutes into the match.

Here’s what happened in Saturday’s matches:

The Skinny: A wild finish saw the visiting Gotham FC hang on to defeat Orlando Pride 3-2. Gotham went up 3-0 through 50 minutes, courtesy of a brace by Gaëtane Thiney and a third by Margaret Purce. Thiney’s goals were both rockets, the first a shot from 25-yards out, and the second a free kick that Ashlyn Harris got her hands on, but was too powerful to keep out.

The Pride started to find their way back into the match in the second half, and got on the board when a shot from Erika Tymrak uncharacteristically slipped through the hands of Kailen Sheridan. Estelle Johnson took down Alex Morgan in the box shortly after, and Marta stepped up to bury the penalty kick.

One Key Moment: Both of Thiney’s goals are highlight reel worthy, but if you can believe it, Gotham’s third goal was even better. While Thiney’s brace highlighted her individual brilliance, the third involved a beautiful build up from no less than six Gotham players:

Inside the Game: Gotham were absolutely dominant in the first 50 minutes, limiting the Pride to barely a sniff at goal. But after Gotham’s third in the 50th minute, Orlando finally seemed to come alive and spent much of the remainder of the match in Gotham’s half. Multiple chances on goal – most notably shots from Marta and Morgan that hit the crossbar in succession in the 61st minute – could not find the back of the net, until Sheridan’s mistake got the ball rolling for the Pride, and Marta’s late PK brought them within one. But a last ditch effort that saw Toni Pressley hit the post, then a shot from Ashlyn Harris – yes, you read that correctly – get blocked meant that the Pride comeback came up just short.

The Skinny: A club in turmoil off the field continues to keep its playoff hopes alive, a testament to the players which serves as a microcosm to the wider movement around the NWSL right now. The Washington Spirit defeated Racing Louisville FC, 3-0 on Saturday to temporarily move into fourth place. Even acknowledging the game in hand over some competing teams, that is a remarkable place to be for a team which recently forfeited back-to-back matches due to COVID-19 protocol violations, and whose players are publicly fighting their primary owner and imploring him to sell his stake in the team.

Trinity Rodman twice assisted Ashley Hatch on goals on Saturday. Hatch’s brace gives her nine goals on the season, tying her with OL Reign forward Bethany Balcer for the league lead with three weeks left in the regular season. Andi Sullivan scored the Spirit’s other goal from the penalty spot after Ashley Sanchez drew a soft whistle in the box.

One Key Moment: Rodman’s involvement in Hatch’s first goal, eight minutes into the match, was a spectacular display of defensive work rate combined with a sublime through ball.

Inside the Game: Racing Louisville made hazardous defensive mistakes from start to finish, which has been the expansion team’s Achilles’ heel this season. Both of Hatch’s goals came as a result of sloppy Louisville buildup out of the back and great defensive pressure from Rodman. The second occurrence — leading to Washington’s third goal — was the most egregious.