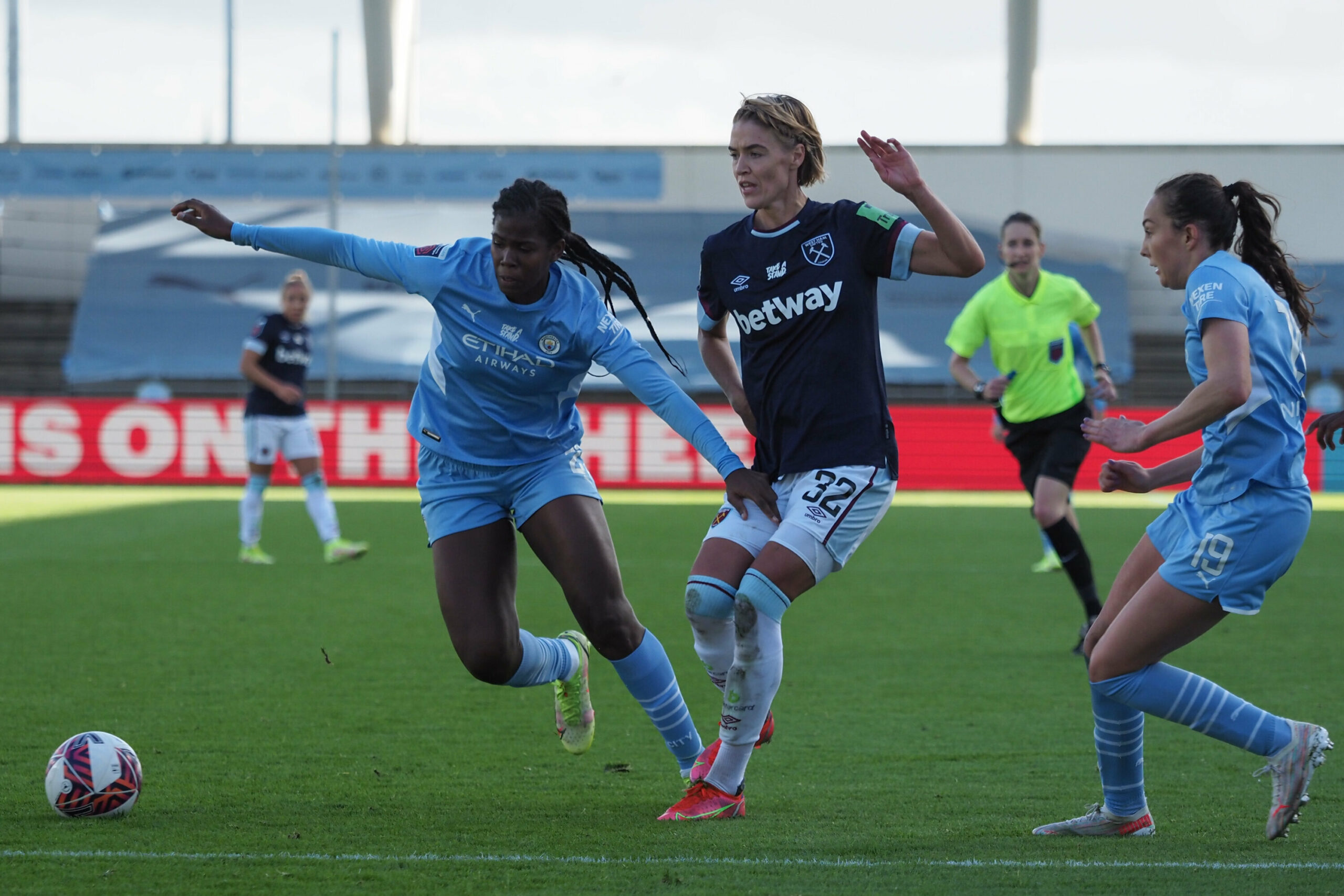 Arsenal and Tottenham carried on their winning ways this past weekend in the FA Women’s Super League, while Manchester City’s dismal start continued with a shock loss to West Ham.

City manager Gareth Taylor is in the hot seat, as his squad was handed their third loss from four games on Sunday.

After a dominant opening half hour for City — including a non-call on a shove to City’s Jess Park in the penalty area — it was West Ham who struck first against the run of play. With time and space on the edge of the area, Yui Hasegawa picked out Dagný Brynjarsdóttir, who was totally unmarked at the back post. Brynjarsdóttir’s header was placed perfectly past City keeper Karima Taieb for the lead.

A ton of credit must be given to West Ham keeper Mackenzie Arnold, who came up with spectacular saves throughout the match on Sunday. Arnold faced seven shots on target from City and maintained her clean sheet.

Much can be said about City’s lack of finishing so far this season, but their defending has been just as shocking at times. While pushing for an equalizer in stoppage time, City defender Demi Stokes misplayed a back-pass, gifting the ball directly into Hasegawa’s line of sight, who beautifully chipped Taieb for the insurance goal.

City’s current injury crisis has been discussed extensively (including here last week), but the talent City does have healthy should be scoring goals. And if your team is struggling with finding the back of the net, giving last season’s Division 1 Féminine leading scorer — Bunny Shaw — more minutes might help. Taylor’s reluctance to start Shaw in the league during this rough start to the season is puzzling, especially considering Shaw recorded a hat trick in City’s midweek FA Cup quarterfinal win.

Leicester appointments ex-player — Former England international and Premier League striker Emile Heskey was appointed Leicester City’s Head of Women’s Football Development on Saturday. He will “oversee coaching, performance and recruitment” in the role. And this isn’t an appointment out of left field – Hensky has been with Leicester City women for the past year as an ambassador and player mentor, and earned nice words from keeper Kirstie Levell last year.

FA Cup semifinals set — Not quite off the pitch, but outside of the league’s realm, the FA Cup semifinal matchups are set. Mid-week, Arsenal defeated Tottenham, Brighton defeated Charlton, Chelsea defeated Birmingham, and Manchester City defeated Leicester in the quarterfinals. At the end of the month, Arsenal will take on Brighton, and City will host Chelsea for places in the 2020/2021 FA Cup Final.

Arsenal 4, Aston Villa 0 — Aston Villa held Arsenal scoreless through 45′ on Saturday, but the floodgates opened after the halftime whistle. Captain Kim Little notched a brace (including her 150th goal for the Gunners), and goals from Mana Iwabuchi and Katie McCabe rounded out the scoring. McCabe’s outstanding chip from about 40 yards out earns my goal of the week vote:

Tottenham Hotspur 2, Leicester City 0 — Tottehnam continued their fantastic, unbeaten start to the season with a two goal win over Leicester on Sunday. Spurs now have 12 points from three matches, whereas with just two goals scored so far, Leicester are still looking for their first points in the WSL.

Everton 3, Reading 0 — Everton earned three points with a win over bottom-of-the-table Reading on Sunday. Next week, Everton will visit top-of-the-table Arsenal in what should be a tougher task.

Manchester United 2, Birmingham City 0 — United recorded their third win of the season on Sunday, a 2-0 defeat over Birmingham. Leah Galton and Ella Toone – continuing her strong start to the season – recorded the goals. Undoubtedly the match to watch this upcoming week is the Manchester Derby on Saturday.