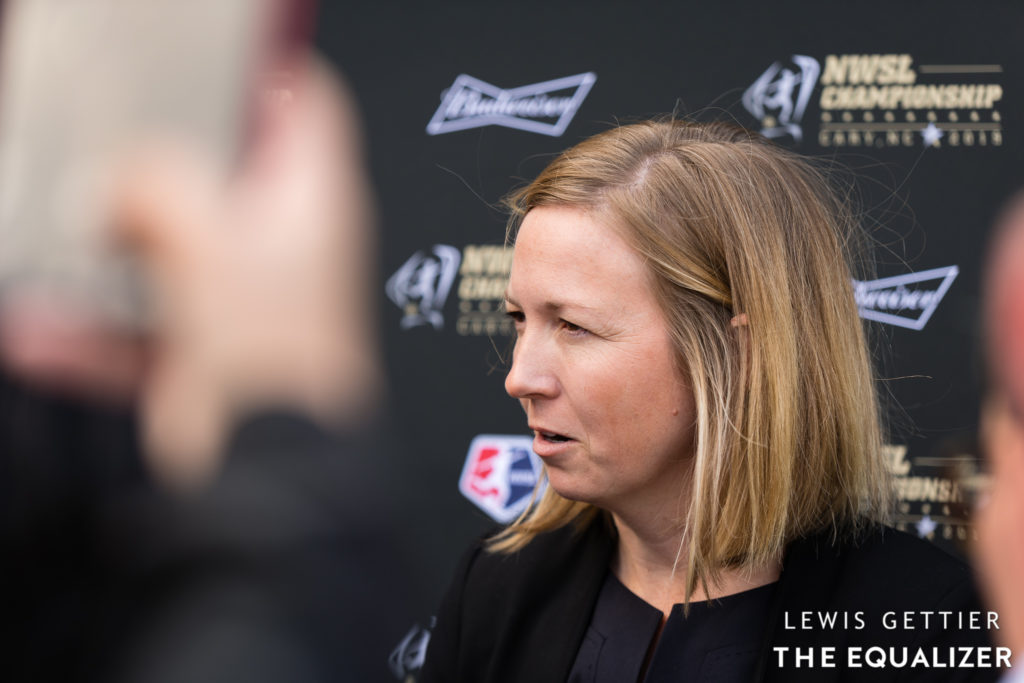 Duffy, Long and Sauvage will oversee the league’s front-office operations following the resignation of commissioner Lisa Baird on Friday. Baird, along with longtime league general counsel Lisa Levine, was ousted in the wake of the Paul Riley sex abuse scandal which shook the NWSL last week, leading to the abandonment of this weekend’s games and demands for protection from players league-wide.

In response, the NWSL announced on Sunday that it had hired the law firm Covington & Burling to oversee a series of investigations and recommend reform to the leagues and its teams. Among them is the re-opening of the 2015 investigation regarding Riley, including a review of his departure from Portland Thorns FC — who publicly thanked him upon not renewing his contract — and Riley’s re-hiring by the Western New York Flash (who became the North Carolina Courage, champions of the league in 2018 and 2019).

Riley was fired by the Courage on Thursday following The Athletic’s report that he sexually coerced two former players over the past decade. Sinead Farrelly and Meleana “Mana” Shim both detailed accounts of coercion to The Athletic. Farrelly, who played for Riley on three different teams in three different leagues, said she was coerced into having sex with Riley and felt she was “under his control.”

FIFA said Friday that it was also launching an investigation into the matter “due to the severity and seriousness of the allegations made by players,” according to the Associated Press.

Shim told The Athletic that she raised her concerns with the Thorns in 2015, after several inappropriate incidents from Riley that season. Farrelly also spoke with the Thorns as part of that investigation, she said. The Thorns said last week — for the first time publicly — that they had an outside law firm conduct an investigation in 2015 and placed Riley on administrative leave. They say now that they shared those findings — which “did not show unlawful activity” but did depict “clear violations of our company policies” — with the NWSL at the time.

That investigation will now be reopened, six years later, under the guidance of Covington & Burling. Amanda Kramer, who is the former Assistant United States Attorney in the U.S. Attorney’s Office for the Southern District of New York, will lead those efforts and report back to the NWSL’s new executive committee. Farrelly reached out to Baird earlier this year, but the now former commissioner said that the investigation was closed.

The NWSL’s announced reforms include “a review of the available investigative reports related to all historical complaints of discrimination, harassment, or abuse (physical, emotional, or sexual) in the NWSL, and where necessary, a reopening of the respective investigation, or the initiation of a new adjudication process.” The overarching call for reform cites an independent review of practices and policies at the league and club levels.

In a press release, the NWSL said that these steps are being taken “in recognition of the need to root out wrong doing, earn trust through accountability, and build an environment where success on and off the pitch is the central theme of any discussion of the NWSL, its clubs and the incredible players that take the field each week.”

The league also released a quote which was co-credited to the three executive committee members:

“On behalf of the entire league, we are heartbroken for what far too many players have had to endure in order to simply play the game they love, and we are so incredibly sorry. We understand that we must undertake a significant systemic and cultural transformation to address the issues required to become the type of league that NWSL players and their fans deserve and regain the trust of both. We’re committed to doing just that and recognize that this won’t happen overnight, but only through vigilance over time.”

Duffy was previously the managing director of the NWSL from 2017-2019 and then became league president in early 2019 for her final year at the league office. Most of those three years were spent without a commissioner following the 2017 exit of Jeff Plush as commissioner, which left Duffy as the highest-ranking league-office personnel at the time.

Under Lisa Baird, the NWSL’s leadership crisis worsened
Kassouf: The NWSL will never, and should never, be the same