NWSL Results: Finally, something good for the Spirit; Reign and Dash win in blowouts 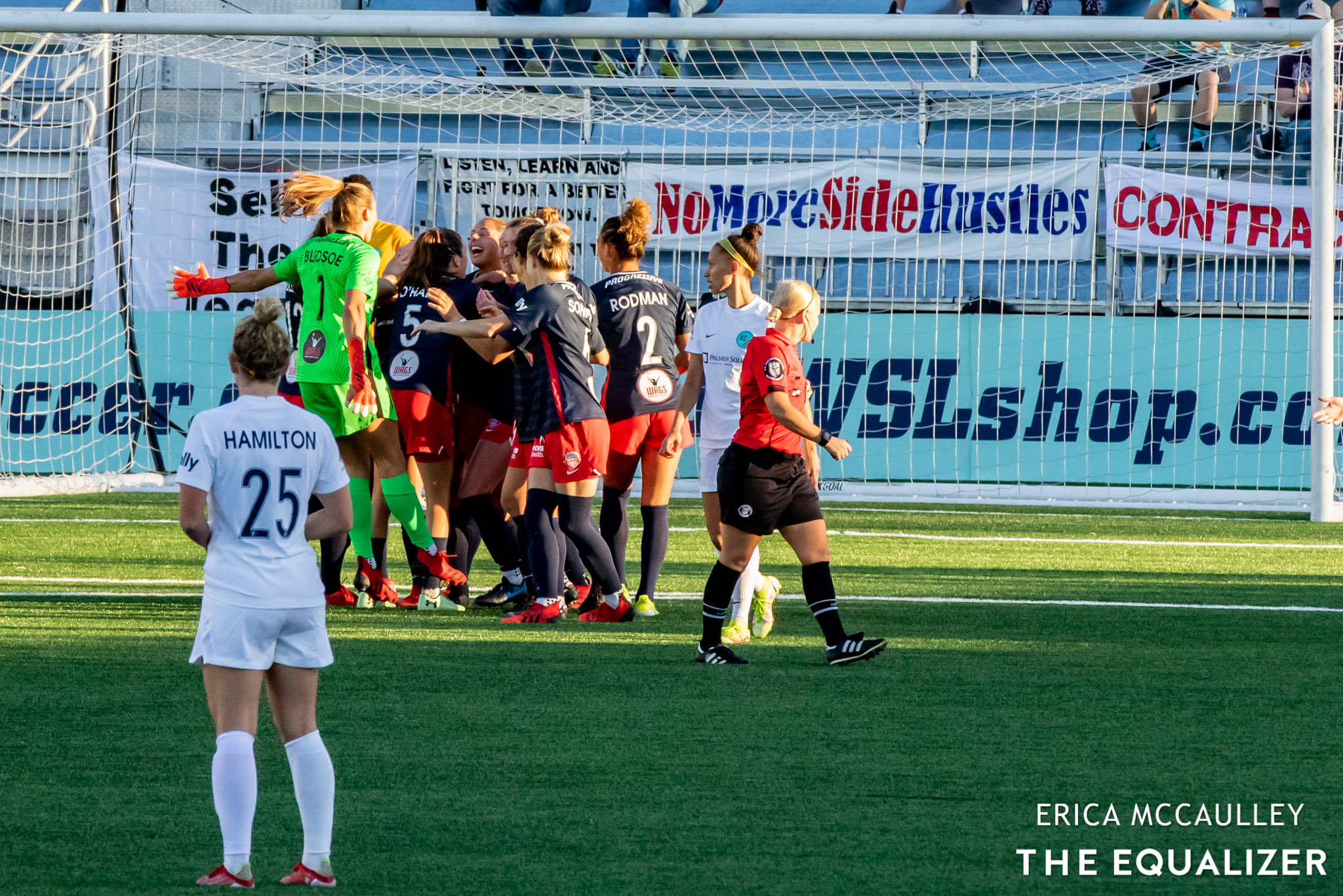 There were three games in the National Women’s Soccer League on Sunday. OL Reign and the Houston Dash won lopsided games, and the Washington Spirit finally got some good news with a win after their summer of controversy. Here’s what played out:

The Skinny: OL Reign blew the doors off the visiting Orlando Pride in the first half in Tacoma, going up 3-0 in a game which could have been a lot uglier even by halftime. The victory puts the Reign within three points of rival Portland Thorns FC for first place ahead of the teams’ meeting on Saturday (the Thorns have a game in hand).

Eugenie Le Sommer scored a brace on Sunday against Orlando, and Bethany Balcer scored her league-leading ninth goal of the season.

Balcer opened the scoring in the third minute, heading in a cross from Sofia Huerta, who served the ball from the right flank.

Le Sommer doubled the lead in the 28th minute with a beautiful shot from distance that looped over Orlando goalkeeper Ashlyn Harris. Dzsenifer Marozsan had intercepted a poor ball out of the back from Amy Turner and played Le Sommer for the opportunity.

The two Lyon loanees combined again four minutes later. The actual finish from Le Sommer might not have been as spectacular this time, but the assist from Marozsan was a masterclass in one-touch passing. After the match, Reign head coach Laura Harvey said it might be the best goal she has ever seen live.

Le Sommer nearly completed a first-half hat trick moments later, rattling a right-footed side-volley off the crossbar from an open position at the back post. Harris was left standing in her tracks — and the crossbar visibly wobbled from the powerful attempt.

One Key Moment: Le Sommer’s shot will draw the attention, but Turner’s inexplicable ball out of the back is where the wheels really started to fall off in this game. The clip only shows the very end result of the pass, but still illustrates that it never should have been made.

Inside the Game: Becky Burleigh went for an aggressive, offensive-minded lineup which backfired. Alex Morgan started in the No. 9 role, with Taylor Kornieck in the No. 10 hole underneath, and Sydney Leroux and Jodie Taylor in wider roles. Leroux has long been a hard-working, two-way player, but the system particularly asked a lot of Taylor.

With Orlando already down 3-0, Burleigh made a tactical change at the start of the second half, bringing on Phoebe McClernon for Taylor and switching to a three-back. Marissa Viggiano also replaced Meggie Dougherty Howard.) The changes stabilized Orlando enough, but the damage had already been done — and nearly was worse, if not for some less precise finishing from the Reign’s front line, combined with a few more saves from Harris.

The Reign continue to find their feet under Laura Harvey. Balcer leads the league in goals; Le Sommer is in form; Marozsan keeps on orchestrating alongside Rose Lavelle; Jess Fishlock is painting every corner of the field like the old days; and, perhaps most importantly for all of that to come together, there appears to be some defensive stability in Tacoma. Alana Cook has found her form after needing some time to adapt, and Huerta looks great at right back.

It’s time to start taking this Reign team seriously as title contenders. A trip to Portland on Saturday will provide a further case study in that hypothesis.

The Skinny: The Washington Spirit played for the first time in almost a month and, despite an early deficit, won a game which not only kept them firmly in the playoff picture but also provided a sliver of good news for a team which has been ravaged by controversy over the past two months.

Darian Jenkins opened the scoring for last-place Kansas City in the 8th minute, beating Aubrey Bledsoe at the near post. Washington answered as close to each side of halftime as possible. Andi Sullivan converted a penalty kick with the last kick of the first half to equalize for the Spirit, and then Washington came out of halftime flying. Tara McKeown, who was subbed on at the start of the second half, scored 11 seconds after the kickoff to put the Spirit ahead.

Kiki Pickett was called for the foul in the box on Kelley O’Hara which led to the penalty kick in first-half stoppage time.

One Key Moment: McKeown’s goal was almost hard to fathom for how easily the Spirit went straight up the gut of Kansas City right from the kickoff — not even in transition. The goal was the eventual game-winner.

Inside the Game: Washington came out flat and looked like a team which had been rocked by instability on and off the field, Jenkins’ early goal was the end product of that, but Kansas City remained on the front foot for much of the first half, pinning back the Spirit in the home side’s 4-2-3-1 setup. Kansas City was wasteful inside the 18, including in the 34th minute, when Lo’eau LaBonta set up Kristen Edmonds on a platter just inside the box, but Edmonds put her shot over the bar.

Acting head coach Kris Ward made a few interesting tactical tweaks, most notably with Kelley O’Hara. The starting United States fullback shifted into a wide left midfield role in the ‘3’ of that 4-2-3-1 setup, in an attempt to provide a spark on the flank. It was also another twist in the ongoing dilemma of what Washington’s best back four looks like (the Spirit have tried a back three at times, too, with little success). On Sunday, it was Emily Sonnett and Sam Staab centrally with Paige Nielsen pushed wide right and Julia Roddar on the left.

Similarly, Kansas City coach Huw Williams opted for Edmonds in the midfield with Hailie Mace starting at center back alongside Elizabeth Ball. Mace’s best position remains a mystery to the outside world. Between North Carolina and Kansas City, she has played on each line of the field in two very different systems.

The Skinny: Houston controlled the match from start to finish, winning 4-0 as Racing Louisville conceded needlessly due to several errors playing out of the back. Bri Visalli, Kristie Mewis, Katie Naughton and Nichelle Prince each scored.

Visalli opened the scoring for her first NWSL goal after a turnover by Brooke Hendrix deep in her defensive end. Visalli then beat Hendrix on the dribble to open the scoring. Mewis added a second goal nine minutes later after Nealy Martin, Louisville’s other starting center back on the day, turned the ball over inside her own 18 on a poor settling touch out of the back.

Naughton added Houston’s third in the 72nd minute by way of multiple failed clearance attempts by Louisville on a corner kick, and Prince capped off the scoring seven minutes from time. Louisville attempted only three shots and none were on goal.

One Key Moment: Louisville’s second big defensive mistake of the night is when things began to really unravel for the home side.

Inside the Game: Louisville was downright terrible defensively, as the above evidence shows. It should be noted that both starting center backs — Gemma Bonner and Kaleigh Riehl — were both absent due to injuries. Martin and Hendrix struggled centrally, and Erin Simon was under significant pressure from the overlapping Allysha Chapman. Racing had little going forward, too, with Ebony Salmon relegated to a reserve role once again. Interim coach Mario Sanchez appeared to make a move to get Savannah McCaskill more involved, but it did not bear fruit as the Dash never looked like they were in any real danger.

Houston’s victory ends a three-game winless streak in league play, giving the Dash their first win since a 1-0 result over Racing Louisville on August 29. The last time the Dash defeated a team in the NWSL other than Louisville was July 17, a 2-1 win over the North Carolina Courage. Sunday’s lopsided victory could serve as a rallying point in the final month of a tight playoff race, but the Dash will truly need to earn their spot in the playoffs in this final run of the regular season. After a game against last-place Kansas City next weekend, Houston plays the league-leading Portland Thorns twice, North Carolina once again, and then ends the season against the Washington Spirit in a head-to-head which could decide the final playoff berth.