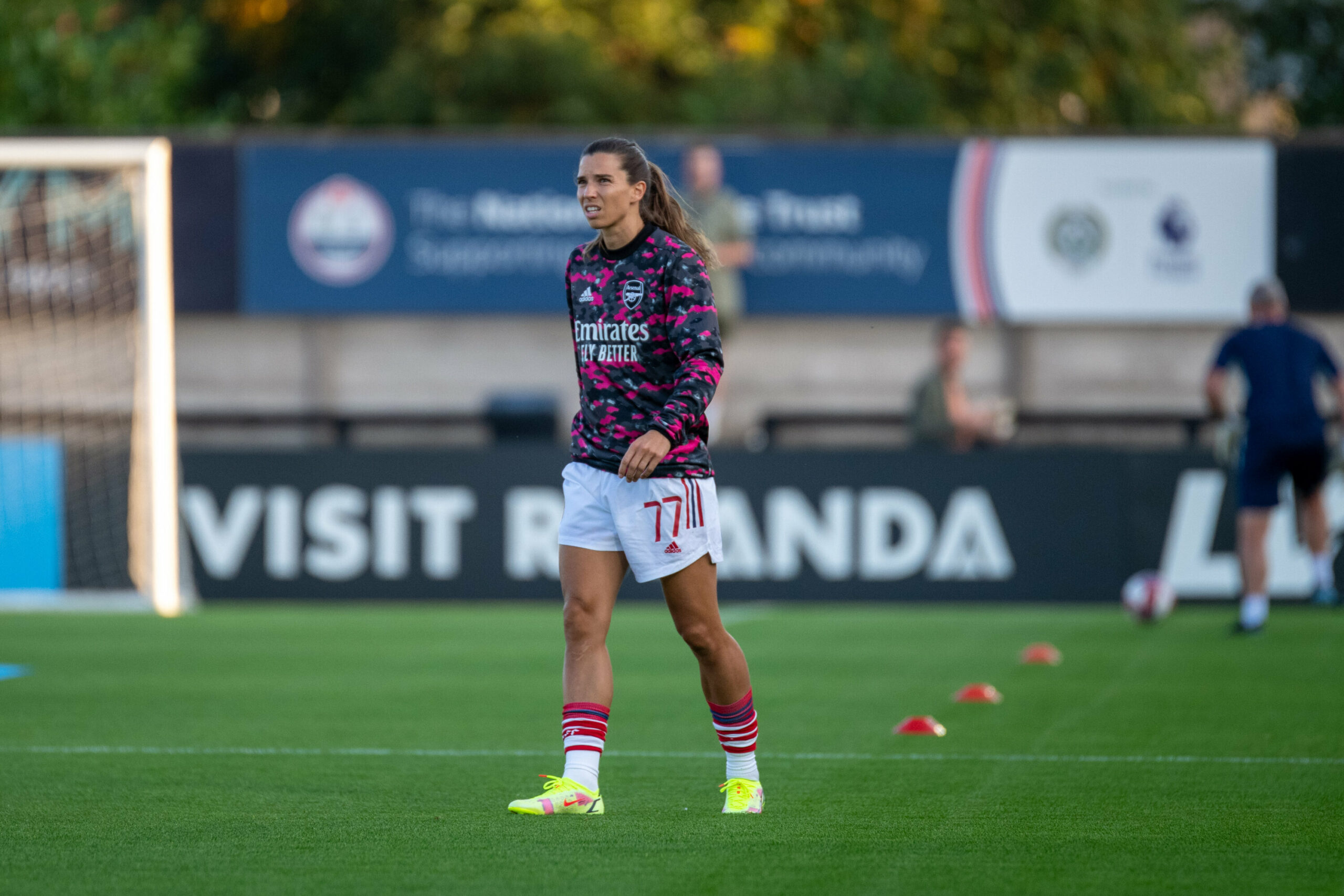 After a lengthy international break, the FA Women’s Super League returned this weekend. With three matches now completed for all teams, it’s the two North London clubs that sit atop the table together, both with nine points. Catch up on all of the weekend action below.

Arsenal thoroughly defeated a depleted Manchester City 5-nil on Sunday to go top of the WSL table. It was City that came out of the gate as the livelier side early, as they pressured Arsenal’s goal inside the first 10 minutes. But the visitors couldn’t capitalize, and instead it was Vivianne Miedema who converted at the other end. A bad back pass from City’s Alanna Kennedy gifted the ball to Beth Mead, who found Miedema in front of an empty goal for the finish.

Kim Little added a second in the 23rd minute with a beautiful finish in front of goal after fending off multiple defenders:

City had a few chances to get back in the match just minutes before the halftime whistle. Arsenal keeper Manuela Zinsberger couldn’t hold onto a shot from Janine Beckie and spilled the rebound, but City didn’t take advantage during the ensuing scramble and the ball was cleared away.

The second half brought more despair for City. Lia Wälti hit a perfect long ball over the top to find a racing Katie McCabe who ventured far up the pitch from her fullback position. Poor defending let City down once again, as neither Kennedy nor Georgia Stanway dealt with the ball before McCabe picked it up and found the net. Little added the fourth through a deserved penalty kick, and a Leah Williamson header in stoppage time added insult to injury.

After struggling against top sides last season, Arsenal’s depth was on full display on Sunday. With defeats over Chelsea and now City, it’s been a dream start to the season for the North London club. And fans were made even happier by Tobin Heath’s debut for the club, who subbed on for Mead in the 86th minute.

City’s injury crisis worsens — To manager Gareth Taylor’s agony, the list of players out for Manchester City with injuries got a bit longer over the international break, as captain Steph Houghton suffered an Achilles injury while in camp with the Lionesses. Add her to the list which includes Lucy Bronze, Kiera Walsh, Ellie Roebuck, Esme Morgan and Hayley Raso, and City’s bench is very thin at the moment.

Arsenal gets an extra day of rest ahead of the UWCL — After their request was initially denied, the FA announced that Arsenal’s league match against Aston Villa next week – originally scheduled for Sunday – will be moved to Saturday. This gives Arsenal another day of rest before the team’s Champions League match in Barcelona the following Tuesday. As reported by Tom Garry at the Telegraph Sport, the plea to move the match was turned down at first due to broadcast commitments, before further conversations resulted in a positive outcome. This is a big win for player safety, as expecting Arsenal to play in London on a Sunday, then travel to Barcelona and play again two days later on a Tuesday is unacceptable.

Chelsea 6, Manchester United 1 — Chelsea thrashed United on Sunday with a 6-1 win. The Blues showed their depth with five different goalscorers getting on the scoresheet – Fran Kirby (her 50th WSL goal), Pernille Harder, Sam Kerr (x2), Drew Spence, and Jessie Fleming (her first in a Chelsea shirt). Check out Harder’s superb run from midfield for Chelsea’s second:

Tottenham Hotspur 1, Reading 0 — After dominating for most of Sunday’s match, Spurs were rewarded with the win courtesy of a late goal by Jessica Naz. That’s nine points to start the season for Spurs, while Reading are pointless and goalless to start, a supremely disappointing start for a side that finished in the middle of the table last season.

West Ham United 4, Leicester City 0 — First half goals by Tameka Yallop (in her West Ham debut), and Claudia Walker put the Hammers ahead early, and two second half own goals from Leicester added the insurance.