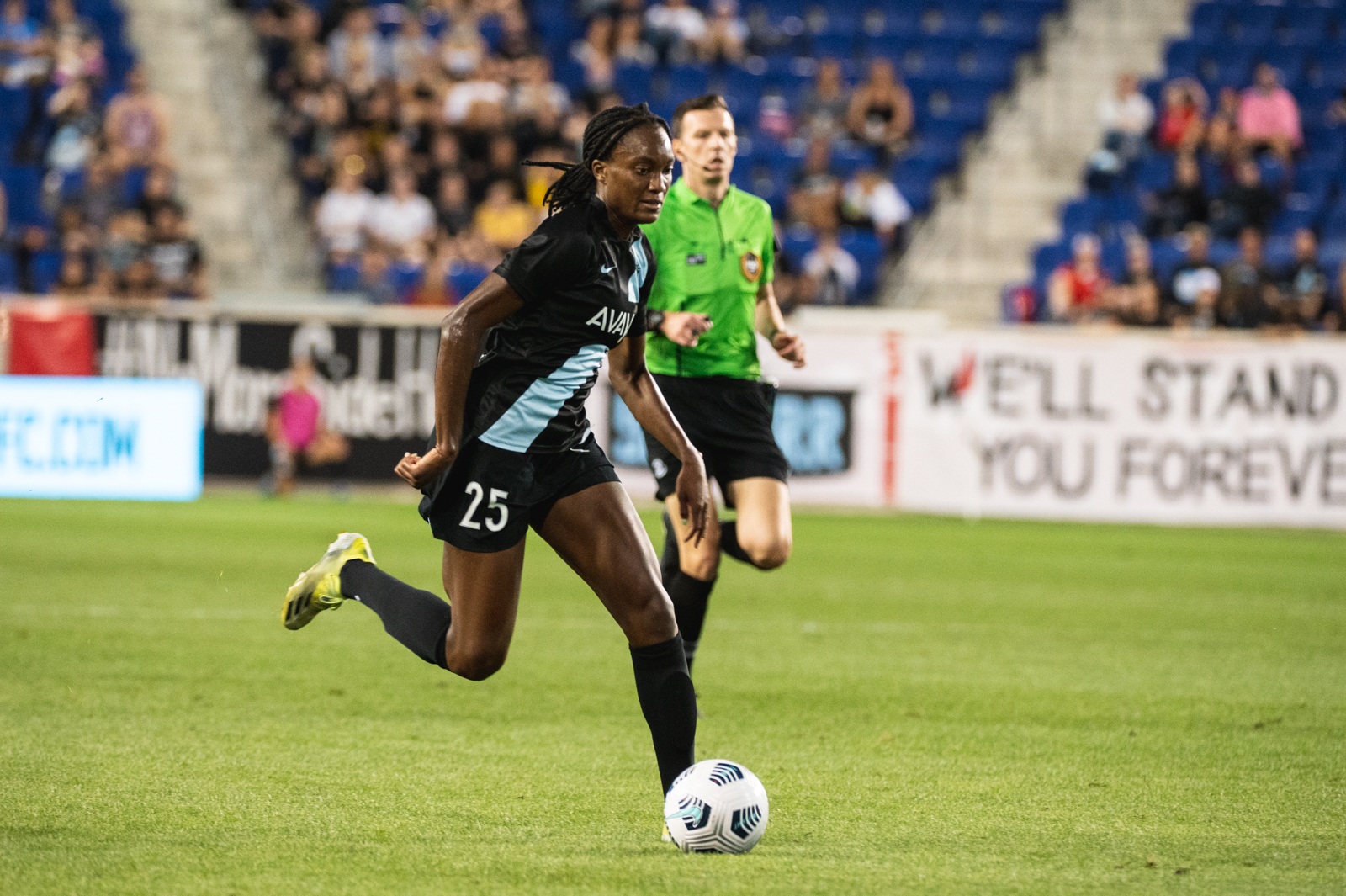 To start off a weekend of NWSL action after the international break, the Courage visited Gotham at Red Bull Arena and the Chicago Red Stars hosted the Portland Thorns. Here’s what went down.

The Skinny: The visitors from North Carolina started the game off well, putting the first tally on the board just twenty minutes in. It was a brilliant strike from Welsh international Angharad James, her first goal since joining the league this year, and it ended a scoring drought for the Courage, but that would be their brightest moment of the match.

The Courage did not hold the lead for long as Margaret Purce, in her long awaited return from injury, got to work. She took on center back Diane Caldwell one versus one, initially she was kept out of the box, but on the second attempt, Purce got around the Irishwoman and was pulled down, earning her side a PK. Carli Lloyd stepped up to take it, and even though Casey Murphy guessed the direction correctly, the power sent it past the diving keeper straight into the back of the net. Purce would officially get herself on the scoresheet not long after, scoring the game winner off the cross and hard work of Ifeoma Onumonu.

Gotham held on to their one goal lead well, and added an extra for insurance with ten minutes to go in the match. This time it was substitutes combining as Olympic Gold Medalist Evelyne Viens found the through ball to Paige Monaghan, who also returned from injury, appearing for the first time since June. It was poor defending in the end from North Carolina as they should have snuffed out the chance as soon as she took a touch inside, but Monaghan did well to thread her shot between the two center backs with a little deflection that had Murphy going the wrong way. Gotham held on for the last ten minutes to win a big three points in their push to make the playoffs.

One Key Moment: Midge Purce game winner? Yes please. In the end it was an easy finish for the Harvard graduate, the defense failing to pick her up in the box, allowing her to ghost in and side foot it home, but this is a great goal from Gotham, something they have been missing. Onumonu is the star of this play, moving terrifically to get to Lloyd’s chip, drawing the attention of every defender and the keeper, and then playing the pinpoint cross. She is brilliant on her own but she greatly benefited from Purce’s return, someone who can keep up with her pace and be there to receive her service.

Inside the Game: This was Scott Parkinson’s first game as Gotham’s head coach where he was actually on the sidelines, I think it’s fair to say it went well. We are very used to a dominant North Carolina midfield but today it was the trio of Allie Long, McCall Zerboni, and Carli Lloyd who controlled the center of the pitch. The Courage rolled out another new formation, hoping to take advantage of the wide areas, but it didn’t work. Zerboni and Long were everywhere, making challenges, breaking up play, and keeping possession. Lloyd was positioned a little higher so she was able to be the link between the midfield and forwards, like she did for the game winning goal, sending Onumonu in behind. But overall, every single Gotham player was committed to the defense and made the win possible, particularly the forwards like Onumonu and Nahomi Kawasumi tracking back to make some big tackles.

The Skinny: The weekend kicked off with an upset for the later game, as the Chicago Red Stars jumped to fourth place after a 2-1 victory, at home, against the first-place Portland Thorns. Rachel Hill provided the game-winning goal after a cross from Mallory Pugh connected with her head and into net.

Christine Sinclair opened up the tally at SeatGeek Stadium in front of over 3,000 fans. Sinclair sent a rocket, after a dink-and-dunk pass from Crystal Dunn, toward goal that hit off the post and took a friendly bounce into goal. However, Chicago immediately equalized after a bobble from Thorns goalkeeper Bella Bixby was picked up by defender Arin Wright — who was a regular presence in the box for Chicago tonight — and passed to Kealia Watt, who netted her third goal of the season. In the second half, Chicago took its first lead with the game-winner from Hill in the 65th minute.

One Key Moment: Usually it’s obvious to highlight the game-winning goal. However, the first goal for Chicago highlighted a major goalkeeper gaffe from Bixby, who has been otherwise solid this season. It was an off-night for the Oregon State alum. Bixby had the ball, making contact with her hands, but dropped the ball upon impact with the ground. It wasn’t an “end of the world” error, but a mistake that Chicago quickly picked up on and profited from.

Inside the Game: Don’t fret, Portland fans — the Thorns are still in first place by a healthy margin. Portland has a big match next weekend with their Cascadia rivalry against OL Reign, who currently sit in second place after a big run this summer. Chicago picked up their second win in the last five games, but those other three matches were draws. Chicago is picking up points and slowly climbing up the table. They’ll take on the Orlando Pride next weekend in another home match.

Kickin’ Back with Kristen Edmonds
NWSL Results: Finally, something good for the Spirit; Reign and Dash win in blowouts