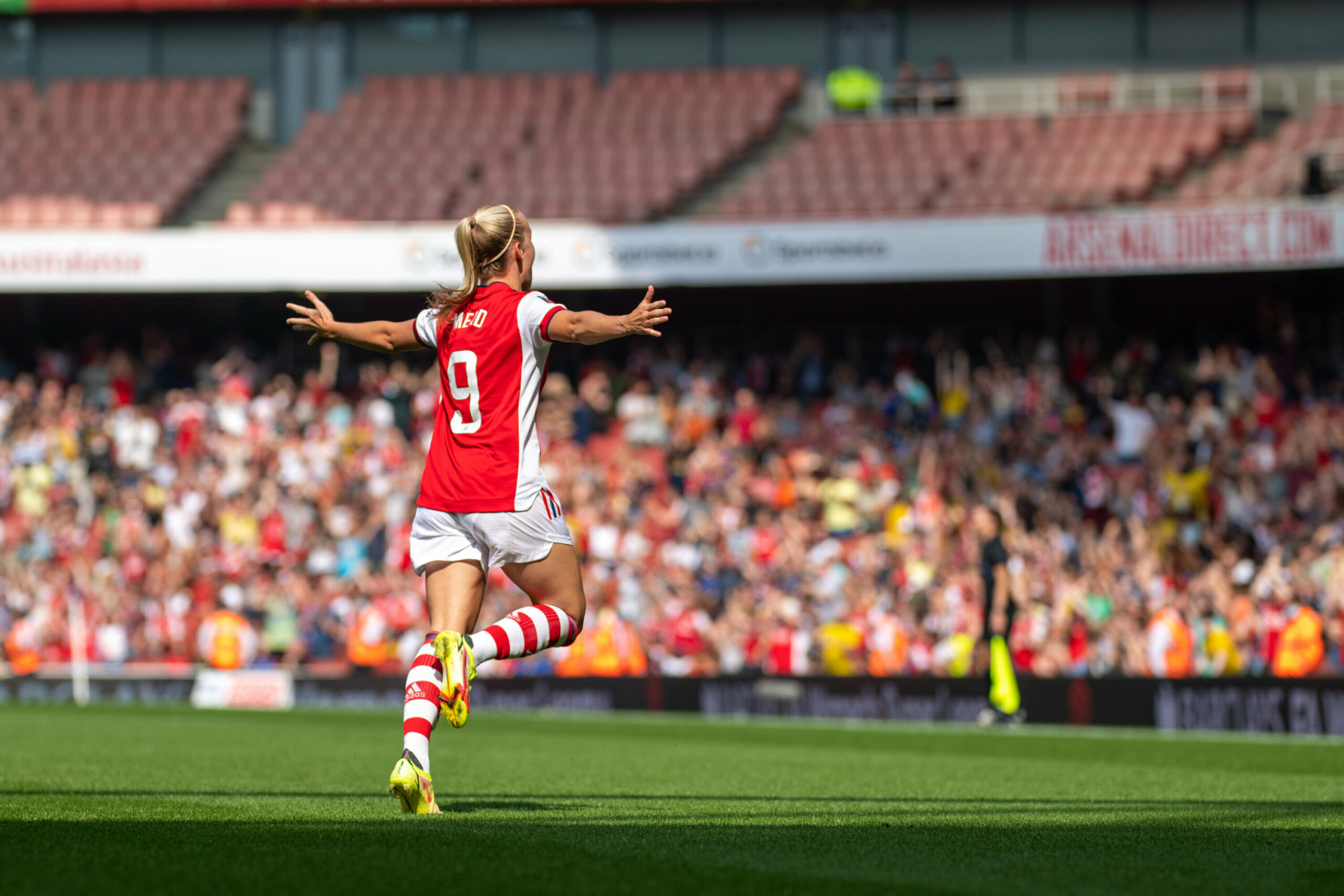 The FA Women’s Super League is back! With a full slate of six matches this weekend, we recap all the action below.

London is red! On Sunday, Arsenal defeated Chelsea 3-2 – their first win over their London rivals at home in the WSL in eight years. And what would opening weekend be without a bit of controversy?

Vivianne Miedema opened the scoring for the Gunners in the 14th minute. A beautiful ball from Katie McCabe found Miedema down the wing, who cut in, and put her shot through Jess Carter’s legs to beat Ann-Katrin Berger at the near post. But Chelsea equalized right before halftime, when Erin Cuthbert hit a great one-time strike from inside the penalty area.

After the break, Beth Mead scored in the 49th and 60th minutes to put Arsenal ahead once again, but her second was clearly a yard offside. The assistant referee’s flag stayed down and the goal stood. Pernille Harder was able to pull one back for Chelsea just minutes later with a signature header from the top of the six-yard box. But despite some heavy pressure late in Arsenal’s third from the likes of second half substitutes Sam Kerr and Fran Kirby, Chelsea couldn’t find an equalizer.

It’s early, but after a rough 2020/21 season that saw Arsenal struggle against Chelsea and City, the win meant a lot to Arsenal’s players – and new coach Jonas Eidevall, who sunk to his knees in celebration after the final whistle. Performance wise, it was a decent start to the season for Emma Hayes’ Chelsea, who elected to not start many of her players that are working their way back to fitness after the Olympics – including Kerr and Kirby. But Hayes will be disappointed that her side were exposed at the fullback position like they were in the Champions League final in May.

After a great off season for Everton – who brought in the likes of Toni Duggan, Kenza Dali, and a trio of Swedish Olympic silver medallists in Anna Anvegard, Nathalie Bjorn and Hanna Bennison – Saturday’s clash against Manchester City felt like a big opportunity to declare themselves among the top sides in the WSL. But a strong opening 15 minutes couldn’t be held for Everton, as Manchester City asserted their dominance early.

First-half goals from Vicky Losada, Janine Beckie, and Bunny Shaw snuffed out any hope of a result for the home side. Scoring in their debuts, both Losada and Shaw showed the kind of clinical finishing that will be crucial for a City side that faltered late last season. And coming off of an Olympic gold medal, Beckie had a player of the match performance, and made the case for herself to stay in the starting eleven moving forward. City captain Steph Houghton added a fourth in the second half with a superb free kick, bent around Everton’s wall. City’s Ellen White, Lucy Bronze, Ellie Roebuck and Keira Walsh were all out with injuries.

Tobin Heath is a Gunner — On Friday, Tobin Heath’s move to Arsenal was officially announced. As was reported by The Equalizer last week, Heath preferred to stay in England while weighing multiple offers in Europe. While she had a successful campaign in England with Manchester United last season (four goals and two assists in 8 matches), Heath’s new team took no time to highlight her history as an Arsenal fan.

Praise for the Sky Sports Coverage — Increased exposure and broadcast quality from the FA’s historic distribution deal with Sky Sports and the BBC was on full display this weekend. A highlight of pre-match coverage featuring Karen Carney and Casey Short talking tactics in front of a touchscreen TV made the rounds on social media this weekend, with fans clamouring for more of this live, in-depth analysis.

Manchester United 2, Reading 0 — Marc Skinner’s first outing as United coach was successful, as goals from Kirsty Hanson and Ona Batlle propelled his side to three points over Reading.

Aston Villa 2, Leicester City 1 — Despite going up 1-0 before the half, Leicester City couldn’t hang on in their FAWSL debut. A fantastic free kick from Sarah Mayling and a goal from Remi Allen earned Villa the win.

Tottenham Hotspur 1, Birmingham City 0 — Kit Graham’s first half strike — that somehow made it through a number of Birmingham defenders in the box unscathed — was enough to propel Spurs over Birmingham on Saturday.

Brighton & Hove Albion 2, West Ham United 0 — Brighton defeated West Ham 2-0 on Sunday, courtesy of a penalty kick from Inessa Kaagman, and a smooth, outside of the foot finish from new signing Lee Geum-min (who spent last season on loan with the Seagulls).