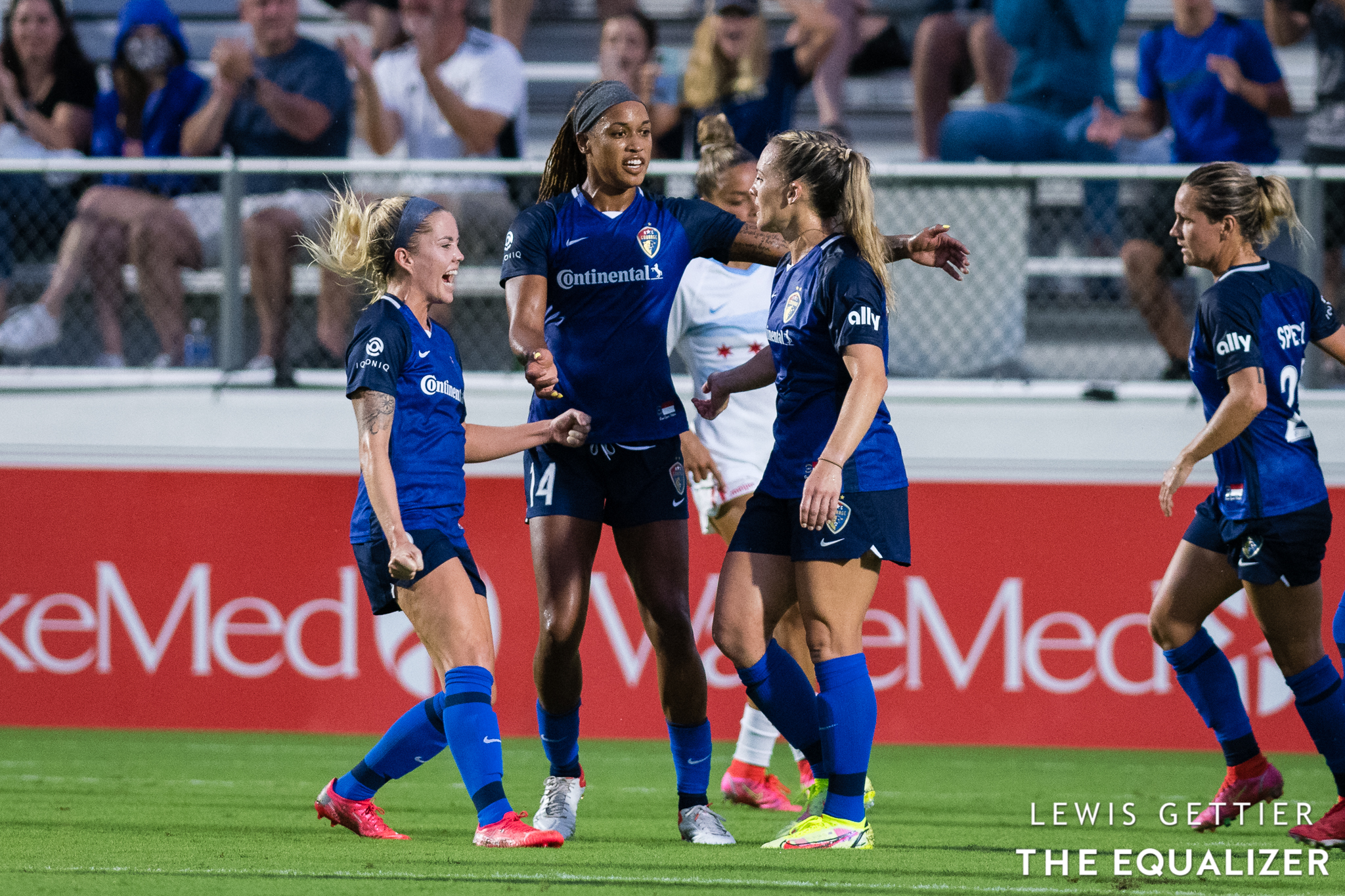 Another full weekend of National Women’s Soccer League action ended with two games on Sunday: a 1-1 draw between NJ/NY Gotham FC and Racing Louisville FC, and the North Carolina Courage defeating the Chicago Red Stars 1-0. Here’s what went down:

The Skinny: Racing Louisville jumped on Gotham early at Red Bull Arena, going ahead in the 13th minute on a tap-in from Nadia Nadim. Cece Kizer played a through ball for Ebony Salmon down Louisville’s right side, and Salmon found Nadim at the back post. Kailen Sheridan, back in the lineup for the first time since helping Canada win the Olympic gold medal earlier this month, rose to the occasion as Gotham struggled through a new, 3-5-2 formation in the first half.

Ifeoma Onumonu equalized for Gotham in the 83rd minute, scoring her fifth goal of the season — two off the league pace set by Sydney Leroux. Onumonu collected the ball inside the 18, with her back to the goal, and separated from defender Gemma Bonner as she turned and hit her shot. The sequence came moments after a big ball forward from Gotham as Louisville argued a foul called on Savannah McCaskill inside Gotham’s defensive half.

One Key Moment: Gotham was reeling to start the match as they tried to adjust to the 3-5-2, and Louisville’s mistake, to borrow a recent line from Christine Sinclair about Canada’s semifinal against the U.S. — is that they let Gotham get to halftime only down 1-0. This game is much different if Sheridan doesn’t make a save on Salmon 1-v-1 in the 26th minute.

Inside the Game: Louisville rolled out the diamond midfield against Gotham’s 3-5-2 — and to great effect. McCaskill found the pockets of space down Louisville’s right side, where Elizabeth Eddy was the wingback, and Nadim and Salmon combined up top to cause havoc for the trio of Estelle Johnson, Gina Lewandowski and Erica Skroski. At least, that was the case for the first 45 minutes. Gotham head coach Freya Coomb said the switch to the 3-5-2 was a combination of what she thought Louisville would present, as well as something the team has thought about implementing and might need in the homestretch of the season. It was, however, their first time implementing it in a match and it was only recently trained explicitly.

Changes in midfield to start the second half helped right the ship, with Sodam Lee replacing Gaetane Thiney. Allie Long, who leads the NWSL in passing accuracy, completed 59 of 60 pass attempts as she dropped deep to support the three-back. Whether the formation holds remains to be seen. Long, Onumonu and Coombe all admitted afterward that it didn’t quite play out as expected, but it was also the first run-out.

Dropping points late prevented Racing Louisville from pulling closer to the pack of playoff contenders ahead of them. Still, Racing sits ninth, five points behind the Washington Spirit in the sixth and final playoff spot — but has a game in hand on every team between them.

The Skinny: Amy Rodriguez scored her first goal in a North Carolina Courage jersey from the penalty spot, and it stood as the game-winner. Kayla Sharples was whistled for a hand ball in the box as she tried to extend her shoulder, but the ball instead hit her lower on her extended arm and she was called for the penalty. Rodriguez hit it straight up the middle and had a subdued celebration, seemingly happy to finally get on the scoresheet for her new team and move on with the game.

One Key Moment: Chicago pushed hard for an equalizer, and Casey Murphy was up to the task on several occasions. This save on Kealia Watt late in the second half might have been the best of the four to preserve the shutout.

Inside the Game: Chicago put in a valiant effort despite a swath of injuries, including Morgan Gautrat in the midfield. Watt and Mallory Pugh pushed the issue on the front line for Chicago, who got off 21 shots but put just four on target. Courage head coach Paul Riley said he prepared his team to face a three-back, expecting the various injuries to affect Chicago’s formation. That wasn’t the case, so the Courage adapted pregame.

Debinha’s return to the lineup made the difference one would expect for an all-world player returning, and Rodriguez praised her new teammate multiple times after the match. The Courage are still awaiting the return of Lynn Williams and Sam Mewis, which will only help as they chase Portland at the top of the table. They still don’t look like vintage Courage, but they are doing just fine.