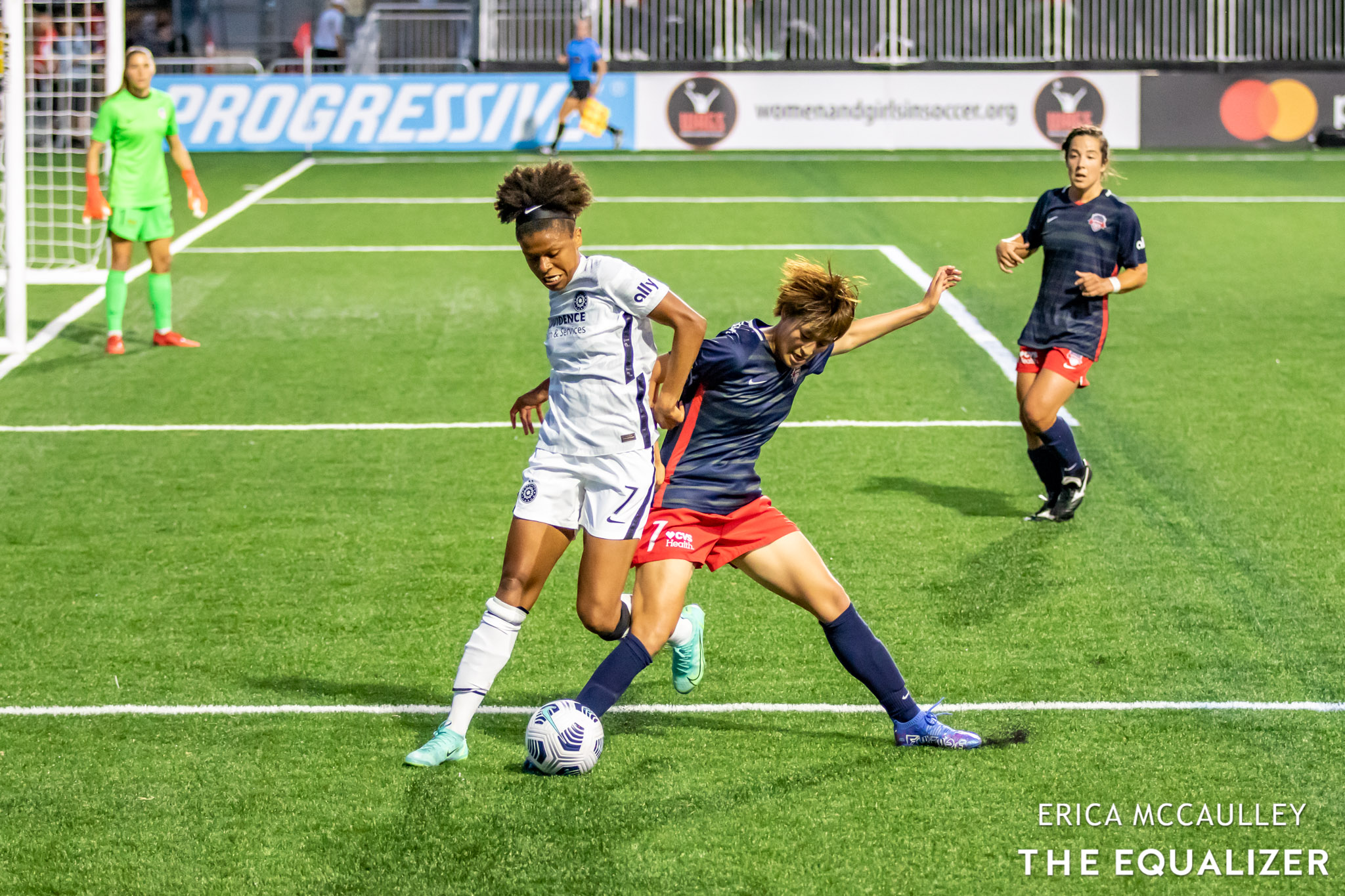 The Olympics may be over, but women’s soccer is still full steam ahead. The NWSL continued its action this weekend with three games on Saturday night.

The Skinny: Six goals were scored in the span of 45 minutes, technically all by the Reign, who dominated to take the three points and move up into fifth place in the standings. OL Reign got the scoring going early with Bethany Balcer’s header off a, specifically practiced, set piece. Dzsenifer Marozsán sent the corner kick low to Jess Fishlock on top of the 18, who popped the ball up in the air. This high ball really seemed to throw off the Houston defense, particularly making Lindsey Harris question whether to come off her line, and Balcer was able to get a relatively unchallenged header into the back of the net.

Fifteen minutes later, the home team scored again, this time from the brilliant individual skill and effort of Sofia Huerta. She started the initial counterattack, finding Eugénie Le Sommer with a long switch. Huerta then sprinted down the field, received the ball back from Le Sommer, and danced her way through the box to find space for her curling effort.

This is the point in the game where Interim Head Coach Sam Laity said his team played its most sloppy soccer of the match. An unfortunate own goal, created by Shea Groom driving into the box and having her shot deflected, woke the team back up. It looked at this point like Houston might make a comeback, but instead the Reign pushed harder and found another just five minutes later. Le Sommer put all her energy into getting on the end of a deflected cross and then followed up her header by rocketing the ball into the net, punishing Houston’s keeper for not holding on to the ball. This effort turned the tide back in the Reign’s favor and not much later Jess Fishlock added another from far out. Right before the halftime whistle Balcer added another for herself and the Reign, her sixth of the season, making her joint top-scorer in the league for the time being. It was another brilliant strike to cap off an emphatic first half from the Reign.

The second half was almost an entirely different game, even though Coach Laity decided to not make substitutions, while Houston made several. Laity said post match that he kept the same players on the field so that they could use the second half to improve what wasn’t good enough in the first half, and also get the game under control so the subs could come in and keep the result. Eventually they used all their substitutions and played out the game, keeping the ball and working on the details, controlling almost 70% of the possession by the end. Houston really struggled to play their way into the game at all and will be looking to get their Olympic players back soon to pull them out of this losing slump.

This was Sam Laity’s last match as head coach now that Laura Harvey has returned from Tokyo. She watched the game from the stands and will start working with the team on Monday.

One Key Moment: There are no words for this beauty of a goal by Jess Fishlock so I’ll just leave this here.

Inside the Game: The departure of Farid Benstiti and instatement of Sam Laity as interim head coach has clearly made a difference with this team. They have completely turned around from their early disappointing results to playing more consistent, getting clean sheets, scoring goals, and playing with joy. Balcer and Huerta credited Laity with bringing back the Reign’s identity and culture, while also allowing them the freedom to do what they are good at, acting more as a guide than dictator. There are so many aspects about the team that have improved, and one could talk for hours about the international superstars, 2019 rookie of the year, young backline, and Sofia Huerta, but one particularly unsung hero as of late has been Dani Weatherholt. With Quinn off winning a gold medal at the Olympics, the Tacoma team needed someone to play that more defensive midfield position and Dani has stepped up in a big way. A selfless player on the field, her defensive effort and positioning allows the other midfield players like Fishlock and Marozsán to float around and play creatively, arguably allowing them to play at their best and contribute offensively. Regardless, this team is playing with confidence and a desire to win. They are moving up the table now and want to keep doing so. This game was a statement putting the league on notice, defenders beware.

The Skinny: On the road in Virginia, the Portland Thorns picked up a 1-0 win over the Washington Spirit on Saturday evening. Simone Charley scored the lone goal of the match for the Thorns in the 29th minute, when Olivia Moultrie – in her first ever NWSL start – sent in a perfect cross towards Charley at the edge of the goal area. Charley beat her defender in the air for the great finish.

Washington had trouble converting much of their possession in the second half into quality looks on goal, but they did have one fantastic chance to equalize in the 71st minute. The ball trickled out to Saori Takarada at the edge of the 18, and her shot sailed over traffic in the box, but hit the crossbar.

One Key Moment: In a single goal game, usually I’d pick the winner as the game’s key moment. But on Saturday evening, the game’s key moment needs to go to Thorns defender Christen Westphal, who made a goal-saving defensive recovery in the 11th minute. In the Spirit’s best chance of the first half, Trinity Rodman looked to have keeper Bella Bixby beat with a shot, but Westphal tracked all the way back in time, dove and blocked the forward’s shot to prevent a goal. That’s Save of the Week material right there!

Inside the Game: Portland managed Saturday’s match perfectly, not allowing the Spirit in on goal often, save for the two chances from Rodman and Takarada. And in particular, Meghan Klingenberg put in a great shift limiting Rodman’s time on the ball throughout. With the win, the Thorns keep their lead on the Courage at the top of the NWSL standings, while the Spirit remain firmly in the middle of the pack, in 5th place with 18 points.

The Skinny: Gotham FC and the North Carolina Courage met up for the first time in the 2021 regular season at Red Bull Arena on Saturday night. The Courage came into the match and upset the home team, taking home the 1-0 victory. Meredith Speck — who earned an assist last week against the Orlando Pride on Brittany Ratcliffe’s equalizing goal — earned her first goal of 2021.

Speck picked up the rebound from a shot originally attempted by Jess McDonald. DiDi Haracic made the initial save, but Speck’s timing on the rebound gave her good positioning and she slammed the ball into net. Speck has been with the Courage since its first season in the NWSL in 2017, and was part of the Western New York Flash 2016 squad.

One Key Moment: It’s always tough in a 1-0 victory to pick that one key moment. The game-winning goal from Speck showed off her awareness in front of goal. However, it was Casey Murphy that was just as important in the victory, keeping a clean sheet against a slew of international attackers. Nahomi Kawasumi tested her early with a volley, but Murphy dove at the perfect time to push away and then scoop up the ball.

Inside the Game: With the victory, the Courage have leapt up from fifth place to second place. Portland still has a healthy margin, especially after a victory tonight against the Washington Spirit. While there is still plenty of action left in the season, the Courage picking up a victory to accumulate four points in two matches will help their final standing.

In fact, Gotham previously held the second place spot with 20 points. Now, North Carolina has that spot with 21 points.

Who’s next for USWNT forwards? A promising pipeline awaits
NWSL Results: Louisville get three points from trio of goals against Kansas City; Orlando down Chicago