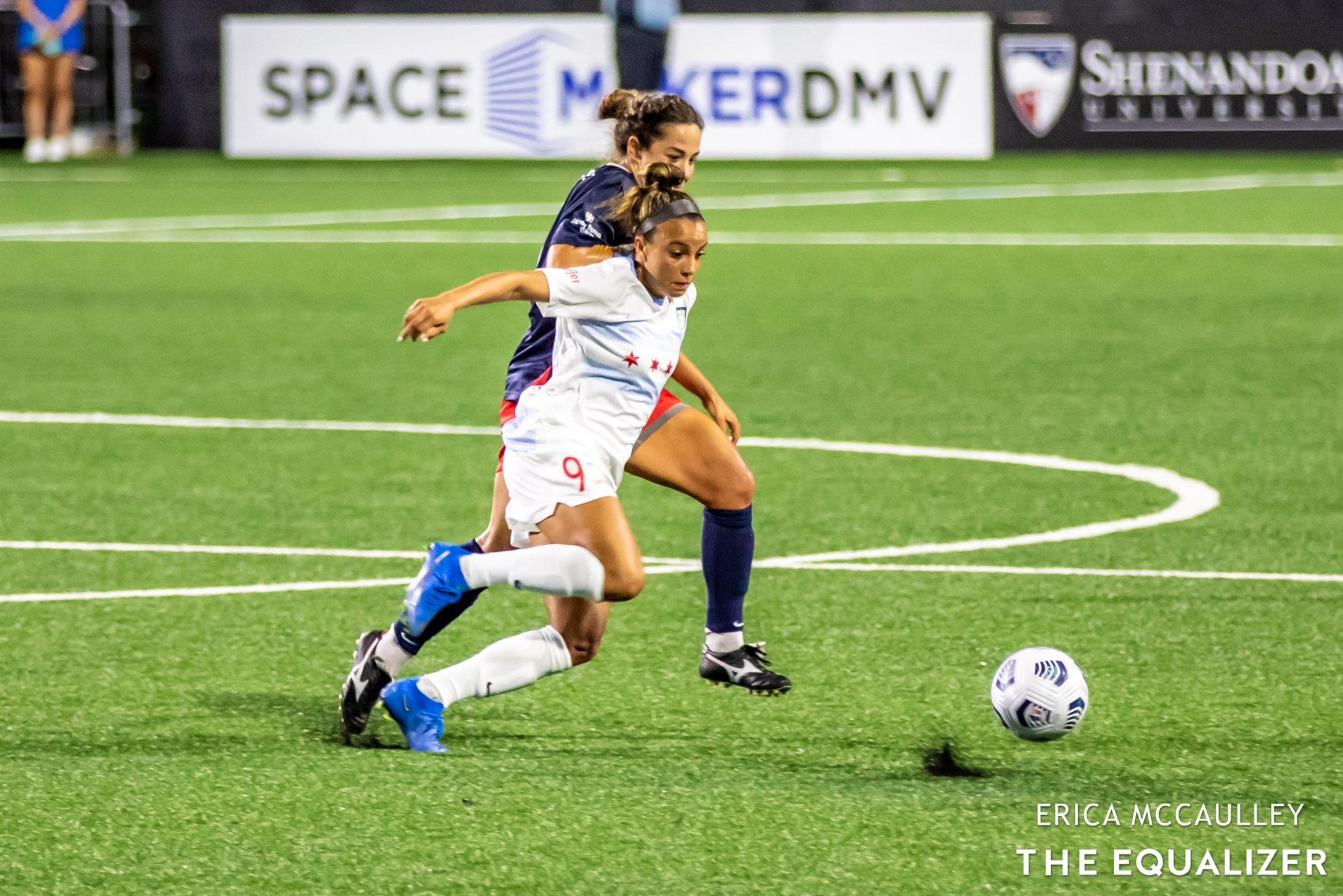 The Skinny: The Chicago Red Stars recorded a strong performance on Sunday evening, soaring to a 3-1 win over the Washington Spirit at home. Mallory Pugh opened the scoring in the 19th minute for Chicago, off of a sloppy turnover by the Spirit. At the halfway line, Tori Huster could not hang onto a pass from Kumi Yokoyama, and Pugh stole the ball and drove to goal. Pugh found the inside of the post with her shot, giving her team the 1-0 lead. And Chicago would double their lead before the halftime whistle. The Spirit weren’t able to clear a corner kick, and Red Stars forward Rachel Hill got the last touch in the ensuing scrum in front of goal.

The Spirit looked more lively in the second half, as they managed to cut the lead down in the 71st minute. This time a sloppy turnover by Chicago gifted Trinity Rodman the ball in the Red Stars’ half, and Rodman showed tremendous patience to round Cassie Miller and find an avenue for her shot.

But shortly after, the Red Stars restored their two goal lead when Washington’s Sam Staab was called for a controversial handball in her team’s penalty area. Morgan Gautrat stepped up and buried the penalty.

One Key Moment: Rodman’s goal was outstanding, but the moment of Sunday’s match has to go to Pugh. After stripping Huster of the ball in the middle of the park, Pugh showed fantastic composure to keep the ball and dribble into space. She encountered four defenders on her way to goal, but the pressure didn’t phase her, and her shot was placed perfectly for the Red Stars’ opener.

Inside the Game: It was all Red Stars in the first 45 minutes on Sunday, as the Spirit struggled to put much together in the way of an attack. Chicago defenders Sarah Gorden and Tatumn Milazzo did well to snuff out Rodman, and Ashley Sanchez did not see enough of the ball to make her dangerous. The Spirit came out with more attacking intent in the second half, and looked to be mounting a comeback after Rodman’s goal (where Gorden’s turnover was the only major blemish on the night), but the late penalty kick call seemed to snuff out all of their momentum. With the win, Chicago sit in sixth place with 17 points, while Washington are in third with 18.

The Skinny: On Sunday afternoon at Providence Park, the Portland Thorns defeated Kansas City 2-0, courtesy of two first half goals. While Kansas came out strong, Thorns keeper Bella Bixby was up to the task. In the sixth minute, Kansas’ Kristen Hamilton got on the end of a cross, but Bixby was there with an incredibly acrobatic palmed save to keep things scoreless. Portland struck shortly after, when a cross by Meghan Klingenberg was deflected into goal by KC’s own Kristen Edmonds. Portland doubled their lead just before half, when Sophia Smith sent in a shot towards goal that was deflected in this time by her teammate, Thorns’ forward Marissa Everett. The second half was a much quieter affair, with Hamilton recording Kansas City’s best chance of the match in the final moments, but her shot sailed wide of goal.

One Key Moment: Though the Thorns put two past Kansas City keeper Katelyn Rowland, the moment of the match happened at the other end. Bixby’s sixth minute stop effectively sucked the momentum out of Kansas’ strong start, and her team got on the scoresheet shortly after.

Inside the Game: With Sunday’s loss, Kansas City are still searching for their first win of the season. They did look competitive on the day, and the additions of Hamilton, Rowland, and Halie Mace – all recently brought to Kansas in the trade that sent Amy Rodriguez to North Carolina – surely helped, as all three were in the team’s starting eleven. After the match, coach Huw Williams said, “I know it’s hard to believe this, but we’re on the right track.” Meanwhile, the Thorns are now unbeaten in five, and Sunday was their third win in a row. Besides Bixby, standouts for the Rose City included Smith and Simone Charley, who showed off their fantastic movement and strong connection that makes Portland’s attack so unpredictable.

The Skinny: The final score of the match is a very accurate depiction of how close this match was with all the quality defending. This game was end to end, both teams traded chances but last ditch defending kept things even. 35 minutes in, Midge Purce’s night ended early, Gotham were forced into a change and brought on Delanie Sheehan. The breakthrough didn’t come until the second half when Gabby Seiler, wide open on the back post, perfectly placed a volley into the upper 90.

Seconds after the opener, Gotham thought they had equalized, but it was correctly called offside because of McCall Zerboni’s positioning affecting the keeper. They continued to create chances, but nothing too dangerous until the last ten minutes when Houston started playing to protect their lead. In the last minute of regulation, Ifeoma Onumonu scored the equalizer for NJ/NY. Despite having earlier attempts saved and blocked, she continued to work for 90 minutes, making great runs, and she was rightfully rewarded. Lindsey Harris had a good night in goal, making a couple clutch saves in stoppage time to prevent Gotham from stealing the win late. In the end, the points are shared and Gotham’s unbeaten run is extended to eight matches.

One Key Moment: An unfortunate defining moment of this game was when Purce had to be subbed off early due to injury (she was walking on crutches after the game but no more information has been shared yet). This was a big early blow to Gotham, but Sheehan, the NWSL draft pick out of UCLA, came in and performed terrifically, most notably notching her first career assist in the league. As a rookie, to keep pushing for that equalizer and keep your composure to find a perfect through ball, is very impressive. Full credit to Onumonu for continuing to make that run for her teammates to find her and topping it off with a brilliant finish from a tight angle.

Inside the Game: For 90 minutes, Houston and Gotham traded attacking chances. Even though Gotham held more possession, much of it was useless passing around while Houston had all of their players back, well spaced to deny forward passes. This defending also forced the visitors to take low chance shots from outside the box. As soon as a pass attempt was just a little too slow or off course, the Dash would pounce for the steal and quickly transition into a fast break counterattack. Defense was the winner of the day as both backlines put in tremendous shifts and brilliant last ditch tackles. Any shot from inside the box was aggressively contested, blocking the attempt before it was able to reach the keepers, who only had to make a couple saves.