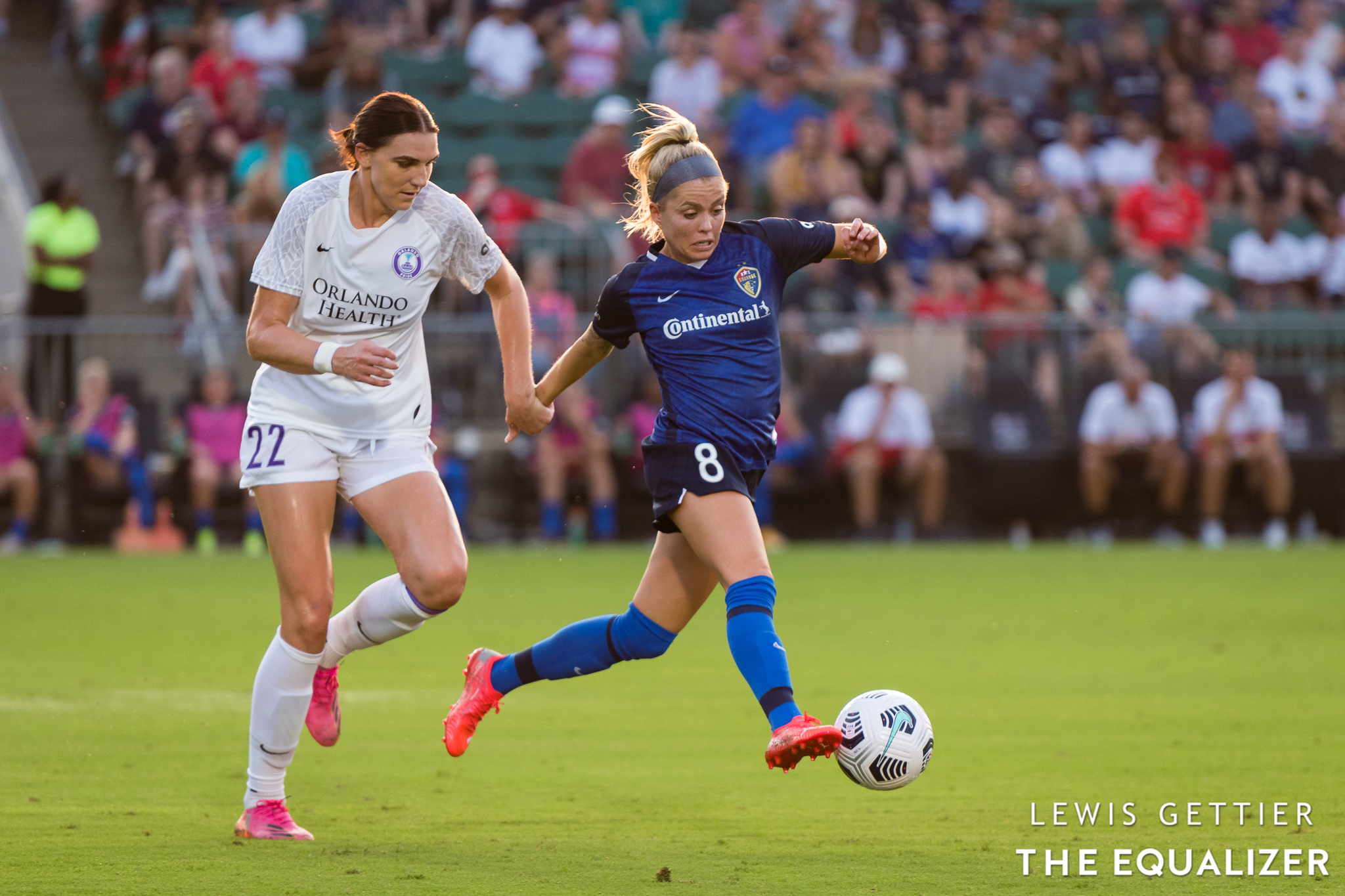 The National Women’s Soccer League carried on Saturday, a day after the Olympics quarterfinals (much to the chagrin of Paul Riley and many others in the league) with two games. Here’s what went down:

The Skinny: Becky Burleigh’s first game in charge as interim head coach of the Orlando Pride ended in a draw, which means that the Pride winless streak has extended to six games. Orlando’s last win came on June 23 against last-place and still-winless Kansas City. Despite the skid continuing, there were reasons for optimism for the Pride.

Sydney Leroux opened the scoring in the 50th minute for her sixth goal of the season, tying her for the league lead. Ali Krieger did the brunt of the work, forcing the turnover and dribbling upfield from the back line to slot Leroux in behind.

Brittany Ratcliffe equalized for the Courage three minutes later, after North Carolina forced the Pride to turn the ball over deep inside their own half. Merritt Mathias created the initial turnover, before Amy Rodriguez crossed to Meredith Speck — who made the extra pass to free up Ratcliffe.

One Key Moment: The two goals get the attention, but this game plays out differently if Amy Rodriguez scores right before halftime. It was Rodriguez’s home debut for the Courage after being abruptly traded there last week, and she accounted for seven of the team’s 15 shots on Saturday. This one, which came from Carson Pickett’s corner kick, was cleared off the line.

Inside the Game: The draw did this game justice. It was a relatively even affair which ebbed and flowed in each half and, at times, had the look of a game being played in the middle of the Olympics with several absences or heavy legs (Abby Erceg started for the Courage after wrapping up Olympic play with New Zealand in Japan on Tuesday). North Carolina is still just kind of getting by without Lynn Williams and Debinha (and, for the second straight game, Jess McDonald due to COVID-19 protocol), but will be significantly better once they all return. Rodriguez is already settling in pretty seamlessly, which should be no surprise given her talent and experience.

Orlando was the team under the spotlight coming into this one, however, with Burleigh taking charge following the departure of Marc Skinner for the Manchester United job. Credit to the former and longtime Florida Gators coach: Orlando did not look like a team which had just changed coaches. Some of the could be the initial adrenaline of having new leadership, which is common (for struggling teams which sack a manager, that bounce is literally the intended effect), but there was also a relative cohesion among the Pride on Saturday. Orlando looked a little bit closer to the first-place team of late spring than it did to the struggling team of the past few weeks.

Will the Pride rally around this result — and Burleigh? The performance, and the vibe on the field, feel even more important in retrospect, after Pride players postgame pretty blatantly indicted Skinner and his abrupt exit.

The Skinny: After a rough start to the season, OL Reign are finally moving up the table. They are still in 8th place on 16 points but second place is currently Gotham with 19 points, so if they continue to put these wins together, they’ll be in the mix for playoffs. Despite the scoreline, this was not an uneven game, with both teams roughly equal on possession. Louisville took twice as many shots but had a third as many on target and that sums up their night. Racing were on the front foot to start off but could not capitalize. Thirty minutes in, Eugénie Le Sommer scored her first ever NWSL goal, killing Louisville’s momentum. Reign controlled much of the rest of the first half, picking smart moments to press, resulting in a second goal for the French phenom just before the whistle. The second goal was created by forcing a turnover in midfield that quickly turned into a brilliant counterattack. Dani Weatherholt was the player with the strip, quickly finding Jess Fishlock who then sent the early ball in behind for Le Sommer, which she finished clinically.

Louisville continued to grow into the game and push higher up the pitch, but their attempts were very well defended. OL Reign were committed to defending as a team and communicated well to handle Racing’s forays into their box. The visitors looked dangerous for the last 10 minutes, with Reign unable to clear and Louisville sending wave after wave of attack, but not enough to trouble Sarah Bouhaddi in goal.

One Key Moment: Fans have been waiting for Le Sommer to get going in the NWSL, and her first ever goal in the league was a certified banger. She also scored her second ever goal in the league, which she said is a relief. She obviously wanted to score earlier but now that the players are clicking and she has some confidence, defenders be wary of what she can do…

Inside the Game: OL Reign have clearly put a lot of effort into their defense recently, especially practicing dealing with long balls in behind. Sam Hiatt spoke after the game about how the transitional nature of the league leads a lot of teams to look for that ball over the top, with a player like Ebony Salmon obviously that’s a tactic of Racing. But Hiatt and center back partner Alanna Cook did a particularly good job handling those balls today, importantly taking that responsibility away from Bouhaddi who has been known to occasionally get beat on related questionable decision making. For Racing, the question remains how are they going to score. They are not a bad team by any means, they put up a fight and had good chances, but there is no one putting the ball in the net consistently, so it ends up being only chance creation with no end product. Special mention for Emily Fox though who continues to be terrific, not just at defending, but driving forward, and often central, creating overloads with runs from deep that are hard to track.