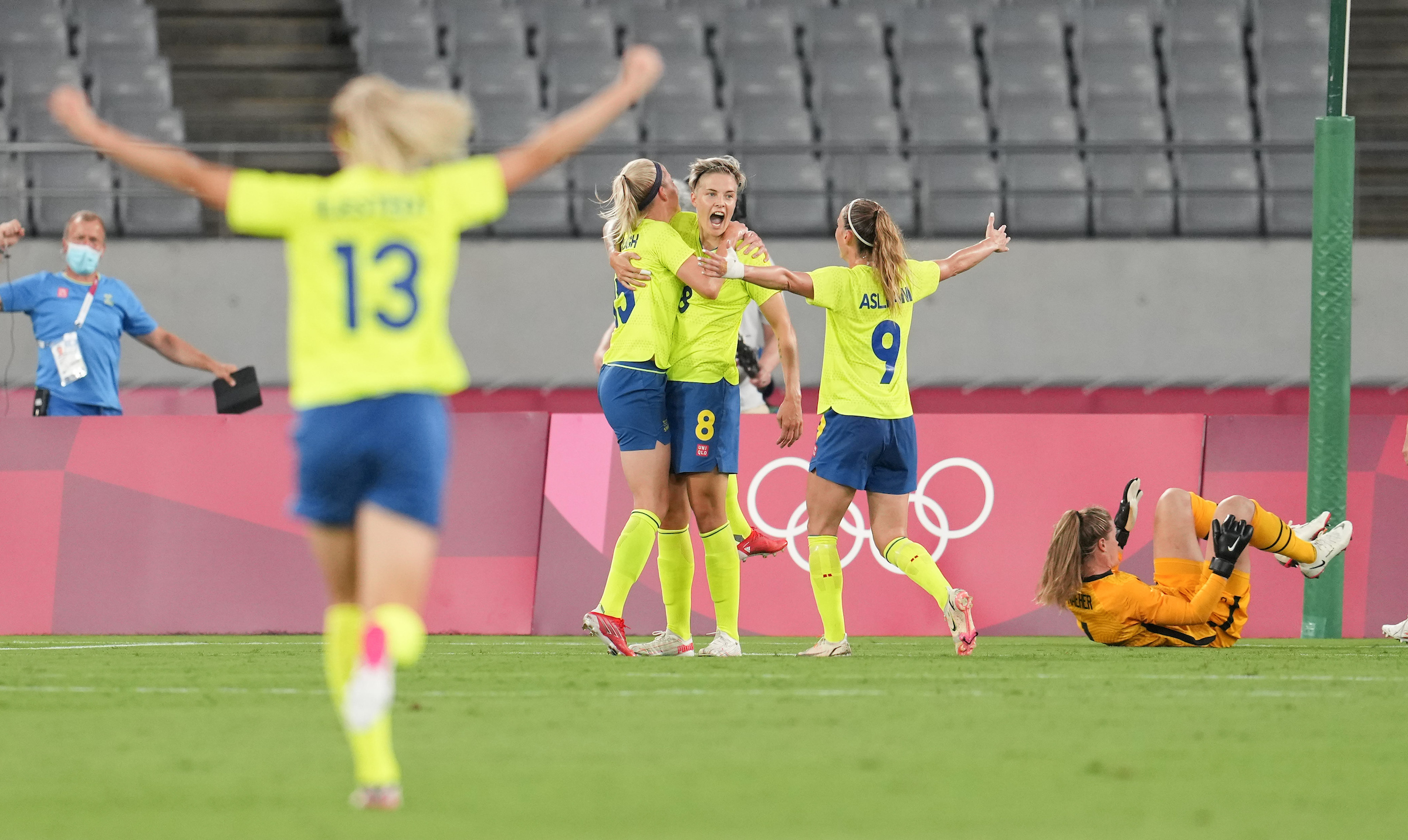 Sweden handed the United States women’s national team their worst loss in a major tournament in 14 years on Wednesday, defeating the Americans 3-0 on the opening day of play at the Tokyo Olympics. The result is the worst since the U.S. lost 4-0 to Brazil in the 2007 World Cup semifinal, and puts a serious dent in the U.S.’ quest to become the first World Cup champion to win the subsequent Olympics.

The loss is Vlatko Andonovski’s first as U.S. head coach since taking over in late 2019 and ends a 44-match unbeaten streak for the U.S. which dated back to January 2019.

Stina Blackstenius scored twice for Sweden and Lina Hurtig added a third off the bench as Sweden dominated play from the opening minutes.

Blackstenius and Sofia Jakobsson overloaded the U.S.’ left side throughout the first half, and that paid off in the 24th minute, when Jakobsson delivered a cross to Blackstenius for the first goal.

Sweden’s second goal, 10 minutes after halftime, came on a corner kick, which the U.S. struggled to defend throughout the match. Hurtig’s goal in the 73rd minute sealed the result just moments after Christen Press hit the post on an empty net on the other end.

Rose Lavelle also hit the post on a header late in the first half, but those moments were anomalies for the United States. Sweden surprised the U.S. by rolling out a four-back instead of the expected three-back, and the Swedes owned the tactical battle throughout the night, nullifying the U.S. midfield and preventing the Americans’ front three from connecting play in any meaningful way.

Andonosvki brought on Carli Lloyd in place of Alex Morgan and Julie Ertz — her first minutes since May 16 after spraining her MCL — for Sam Mewis to start the second half, but little changed.

The U.S. next plays New Zealand on Saturday in a must-win. Second place is likely now the best possible finish for the U.S., which would mean a quarterfinal against the first-place team from Group F — likely Brazil or the Netherlands. The two best third-place finishers from the three groups also advance to the quarterfinals — and goal-difference is a factor there.

Mana Iwabuchi came up clutch once again, rescuing a point for Japan with an 84th-minute equalizer. Iwabuchi caught goalkeeper Kailen Sheridan — who had to replace an injured Steph Labbe, caught between minds and off her line to one-hop a shot past her.

Christine Sinclair opened the scoring early, finishing her own rebound from a shot which had hit the post. Canada plays Chile on Saturday.

Sam Kerr scored and set up Tameka Yallop’s opening goal to lift Australia past 2023 World Cup co-host New Zealand. The Football Ferns generated zero shots and had only 38% possession at halftime, when they trailed 2-0, but Gabi Rennie’s second-half stoppage-time goal for New Zealand spoiled Australia’s shutout. That could play a role in a goal-difference tiebreaker for either team.

Ellen White scored twice, including on a dazzling scissor-kick, as Great Britain comfortably defeated Chile, 2-0, in the Group E opener.

Marta scored twice and Debinha, Andressa Alves, and Beatriz each added goals as Brazil crushed China. Formiga, at age 43, started for Brazil and became the first player to participate in seven Olympic soccer tournaments. She has played in every Olympic women’s soccer tournament since the inaugural competition in 1996.

Defending: optional. That was the case for both sides, to a degree, though this was predictable in some ways. Vivianne Miedema set the pace for the Netherlands with four goals on the way to this blowout win.

Barbra Banda, who Sophie Lawson tabbed as the player to watch for Zambia in EQZ’s tournament preview, scored a hat trick for Zambia.

Liga MX Femenil, Apertura Week 1: Alison Gonzalez picks up where she left off
How Sweden meticulously picked apart the USWNT