Tokyo Olympics preview: One player to watch from each team 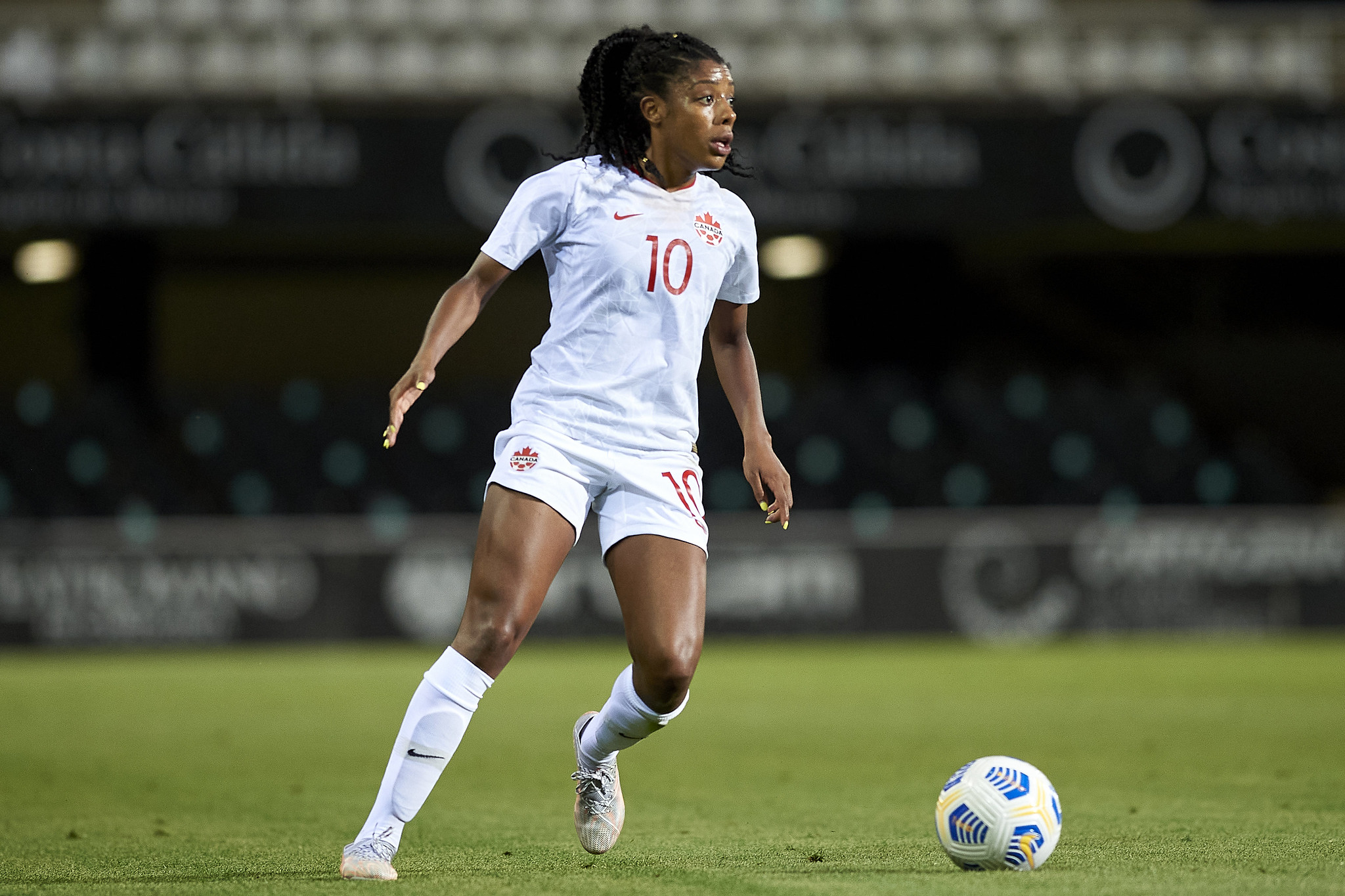 With a condensed schedule in an unfriendly climate, Olympic success will depend on certain variables for the nations who go deep in the tournament, but each team will look to their key players for on-pitch inspiration. Unlike at a World Cup or European Championship – and in normal circumstances – where coaches can put faith in young guns who are keen to impress, the bulk of the heavy lifting this summer will be done by the more experienced players. But just who do each nation need to be at the top of their game to spur them on?

This is the group of transition, new coaches and youth liberally mixed with experience, and Canada’s 26-year-old Ashley Lawrence kicks off our run-down. A mainstay in the Canada squad, Lawrence’s versatility across the defense and midfield could be crucial for Bev Priestman this summer, if a tactical shift is required. Well used to big occasions by now, Lawrence typifies the modern fullback, as comfortable getting up the pitch to help attacks as she is getting back to clear any mounting danger.

Having booked their spot at the Olympics via the inter-continental playoff against Cameroon, Chile have enjoyed a very respectable run of form following on from the World Cup. Not a team to attack at will, Chile biggest strength can be found wearing the captain’s armband between the sticks. Far more than just one of the best goalkeepers in the world, Christiane Endler brings calm and structure to her national team, leading from the back to keep La Roja involved in their matches.

A player who could be regarded as a “break out” – for those who don’t watch the FAWSL – is the youngest member of Hege Riise’s Team GB: 20-year-old Lauren Hemp. A determined winger, Hemp has consistently shown a level of understanding of the game that belies her years and has never looked out of place on the biggest stages. Although most fans will be excited to see players like Kim Little and Fran Kirby milling about on the pitch for GB, it is likely to be Hemp who causes the biggest stir in the British attack.

A national side that has seemingly been in flux since manager Asako Takakura took the reins in 2016, one of the few constants for the Nadeshiko has been talismanic attacker, Mana Iwabuchi. A technical player of the highest order, Iwabuchi’s close control and deft touch has left more than a few defenders grasping at air to halt her progress with the ball. In a Japan team that does not always marry on the pitch, it is Iwabuchi who drives the team on in attack, dragging them into dangerous positions.

A squad with more than its fair share of stalwarts, Brazil will be counting on those who have been there and done it before, to do it again. In tournaments past, it has Marta who we would have been waxing poetic about, but this time around, it feels like there has been a shift with the 35-year-old softly knocked down in the pecking order, supplanted by Debinha. Having risen to a world-class level after her move to North Carolina, Debinha rubberstamped her importance for Brazil at the 2019 World Cup and has been running with the baton ever since. Wiley and resolute when in full flow, the 29-year-old has made herself indispensable to Pia Sundhage’s Brazil.

With a squad of players who are likely to be unknown even to the most well-versed of women’s football fans, Jia Xiuquan’s group of 22 is one of the least experienced at the Games – with just six of them having more than 30 caps. The much-changed personnel and poor preparation have given China a mountain to climb this summer, but if the Steel Roses are to have any joy in Japan, it will be in no small part due to Wang Shuang. Having been given the armband for the Olympics, the weight of expectation is firmly on the midfielder magician’s shoulders. At her best, inspirational and charismatic, Wang is the architect in the squad unlocking the opposition’s midfield and defence for her teammates to benefit.

Sarina Wiegman’s Netherlands is a squad most can set their watch by — a familiar 4-3-3 with little rotation in personnel. As seen at the 2017 Euros and 2019 World Cup, each player has a role to play to keep the squad balanced and able, not just to set the tempo but to attack with precision. Not always the one to be relied on for goals at major tournaments, Vivianne Miedema’s very presence is enough to worry most teams – and with good reason. It’s the striker’s work off of the ball, to create space for her teammates to exploit that becomes one of the Dutch’s best weapons. Her clinical touch is enough to warrant respect, and it is Miedema’s complete game that makes her vital for the Oranje.

The lowest ranked team to qualify for the Olympics – currently 104th in the world, 67 places behind the next lowest ranked team, Chile – the youthful Copper Queens will be looking to 21-year-old captain, Barbra Banda to be the spark for them in Japan. A striker who fits the cliché of someone who “scores for fun,” Banda rarely fails to hit the target and has proved her worth in front of goal for both Logroño in Spain and Shanghai Shengli in China. A leader for Zambia, Banda’s job will be to both create the attacks as well as seize the opportunities in front of goal. She is a player who is up to the task.

Casual observers might be aware of the Matilda’s less than stellar results this calendar year, with Tony Gustavsson still trying to strike the right balance across the pitch, Australia are somewhat of a wild card considering they’re a known entity. Their friendlies this year have seen the coach experiment with different shapes and formations, but one of the constants has been the attacking threat of Ellie Carpenter. Having been relegated to a back three in recent games, it’s palpable just how important Carpenter is to developing Australia’s attacks and how much the Matildas’ offense weakens when she can’t get forward. If Gustavsson’s charges are to have any real chance of navigating the knockouts this summer, Carpenter’s influence out wide will be critical.

New Zealand is another squad full of players who have been there and done it — although have seldom left with much relative success — with an average age (despite five players under 23) of 26. Given a tough group draw, the Football Ferns’ best chance of progression will be limiting their opposition in attack and trying to spring counters. With the emphasis on defense, all-time cap-leader Ria Percival could prove to be New Zealand’s most important player. Usually used in a deep midfield role for her country (unlike domestically, where she’s fielded at fullback), Percival’s foil for the defense and balls sent over the top, for Hannah Wilkinson to chase, will be key.

Often compared to former teammate, Lotta Schelin, Kosovare Asllani looks set to take the mantle and fill a similar role for Sweden that Schelin did during the Rio Olympics. Sweden is a squad which is not short on options in attack and midfield, and Asllani’s growth as a footballer over the last few years has made her one of Peter Gerhardsson’s most trusted players. A foot soldier who always seems to leave the pitch with battle wounds, there is a selfless nature to the midfielder’s game that has seen her become an integral part of the Swedish attack. Despite still wearing No. 9 for her country, the 31-year-old more often starts in the 10 role and has been racking up the assists for her country this year, making herself one of the toughest players in yellow to come up against.

Throughout the choppy start to the United States’ 2021 friendlies, there was always one player Vlatko Andonovski could count on: Christen Press. With the U.S. not always the most relaxing team to watch this year, Press’ individual brilliance has been more than enough to see the world champions through even the most frustrating of matches. In a squad that has an embarrassment of riches everywhere you look, Press has stood head and shoulders above her compatriots this year, with her breath-taking shooting accuracy serving as one of the deadliest weapons in the United States’ attack.