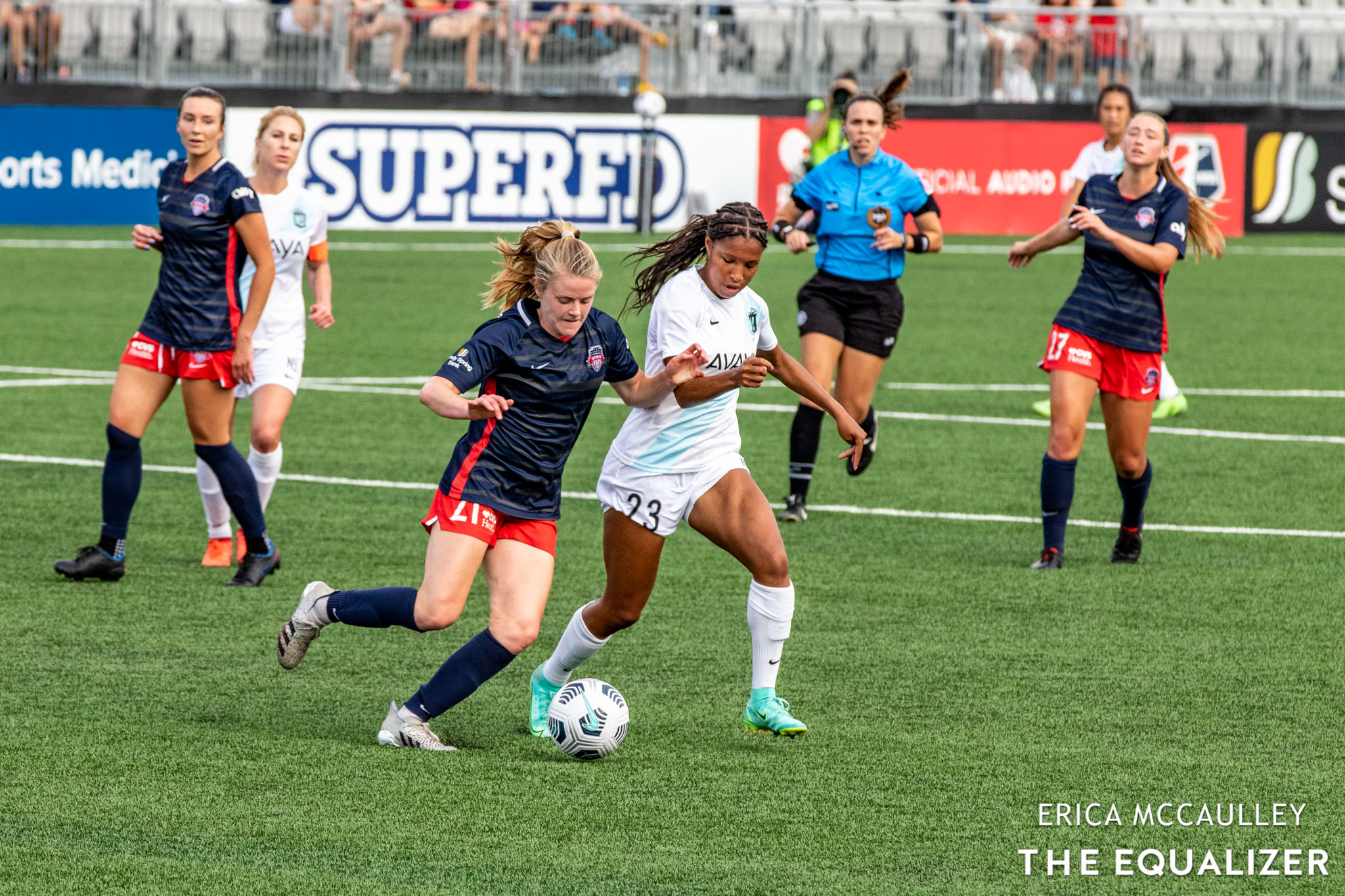 At one point on Sunday, the top six teams in the National Women’s Soccer League were separated by one point. Even for a league known for its parity, the 2021 regular season is as unpredictable as it gets. At the end of the day Portland is first place in the standings, with several teams close behind.

The Skinny: Washington played 83 minutes with 10 players after Sam Staab was sent off early for, ostensibly, a DOGSO tackle, but the Spirit still managed to take the lead 13 minutes in, when Trinity Rodman cut inside onto her right foot and buried her shot past Didi Haracic. Gotham got back on track with goals from Nahomi Kawasumi and McCall Zerboni — both on corner kicks — before Ashley Sanchez struck a wonderful free kick for the equalizer.

One Key Moment: Staab’s red card undoubtedly changed the game, and you can bet the Spirit will be appealing it. Paige Nielsen was initially shown the red card by mistake, but after several minutes of confusion, that was rescinded and Staab was shown the red. First there was the question of whether Purce was fouled inside or outside of the box. Referee Karen Callado determined that the foul was outside of the box. The red card was the more questionable decision, since Nielsen had recovered in enough time to provide supporting defending for Staab, meaning Staab was not the last player.

Inside the Game: Andi Sullivan had to carry the burden of moving into an unexpected center back role, but that did not prevent her from being a deep playmaker as she has been in her No. 6 role. Sullivan played the nicely textured through ball to Rodman for the Spirit’s first goal, and mostly helped hold down the fort considering the circumstances.

Sanchez and Rodman remain capable of turning a game on its head from nothing, but the Spirit ran out of gas under the sun and on the turf at Segra Field. The player disadvantage was particularly evident in the waning minutes as they tried to chase an equalizer. It’s a tough result to swallow for Washington, and Staab’s absence next week will be felt if they can’t successfully appeal the decision.

Gotham, meanwhile, is unbeaten in six games since the 1-0 home loss to Portland on May 30. They entered Sunday’s match after a tumultuous week which saw general manager Alyse LaHue fired following a league investigation.

The Skinny: Own goals. The Red Stars have now won three straight games, scoring six goals — and five of those were own goals. It happened again on Sunday: Chicago’s first two tallies came off of Reign players. It’s a wild stat made even more perplexing by the victory sending Chicago, at least for a couple hours, to the top of the NWSL table despite a minus-4 goal differential.

Postgame, OL Reign players and interim head coach Sam Laity blamed themselves for mental mistakes. They got off to a bright enough start, with Bethany Balcer giving the Reign the lead 12 minutes in to follow up her brace last week in a 2-0 win over Kansas City.

One Key Moment: Mallory Pugh created both of the own goals but did not get credit on the scoresheet. But there was no mistake about how to credit the third Chicago goal on the night. Pugh turned her defender in the box and slammed a shot past Sarah Bouhaddi to give the Red Stars an insurance goal.

Inside the Game: The Reign continue to be inconsistent, with an unclear path toward the team they want to be. News this week that Laura Harvey will return as coach is undoubtedly a boon for the club, but her official arrival remains several weeks away — she’s in Japan assisting the United States women’s national team at the Olympics — and she will have less than half a season to try to right the ship. The Reign are also very much in the ‘other’ pack of three, with Racing Louisville and lowly, winless Kansas City. It is not an insurmountable hole to climb out of considering there are six playoff spots, but it will be difficult.

The Reign were sloppy playing out of the back on Sunday, which remains the key area of concern for them. For all the attention on the attacking talent, there remains defensive vulnerabilities.

The Skinny: Despite the scoreline, Portland controlled most of this match and looked the better side throughout. Sophia Smith opened the scoring in the first half and Marissa Everett doubled the advantage 15 minutes into the second half. Portland had a chance to double the lead earlier, 39′ when Meghan Klingenberg won a penalty kick. Rocky Rodriguez stepped up to take it but Ashlyn Harris came up with a huge save to keep it close. Generally, Orlando had so many players back to defend that they couldn’t generate much offense.

Orlando started to push hard for a goal the last twenty minutes and eventually scored a consolation goal five minutes into stoppage time. The fresher legs of Abi Kim found fellow sub Marisa Viggiano with a cut back ball, but it was too late to earn a point. After the match, Mark Parsons said that it was a fantastic strike to beat Bella Bixby and overall thought the team defended well all over the pitch.

One Key Moment: Sophia Smith has been discussed not only as the future of the U.S. Women’s National Team, but of this league. Her ability to run half the length of the field, ride a very physical challenge, and finish with a near post rocket is incredible, especially considering she is still working back from injury. This her third goal of the season and one the Thorns really wanted after failing to score in their last match against Gotham.

Inside the Game: The entire match was very physical and once again brings up serious questions about the refereeing in this league. Several tackles were ignored and accumulated fouls were not yellow carded. The game seemed more and more out of the ref’s control as the match wore on. This is not to mention how long it took to whistle play dead when players went down with head injuries. Both Morgan Weaver and Gunny Jónsdóttir were on crutches after the match due to being on the receiving, and attacking end, of bad tackles. If Weaver turns out to be seriously injured when she gets x-rayed tomorrow it will be a huge loss for the Thorns because she ran the whole match like her life depended on it. It was Weaver’s effort that put the most pressure on the Orlando backline throughout the match, forcing them into mistakes.