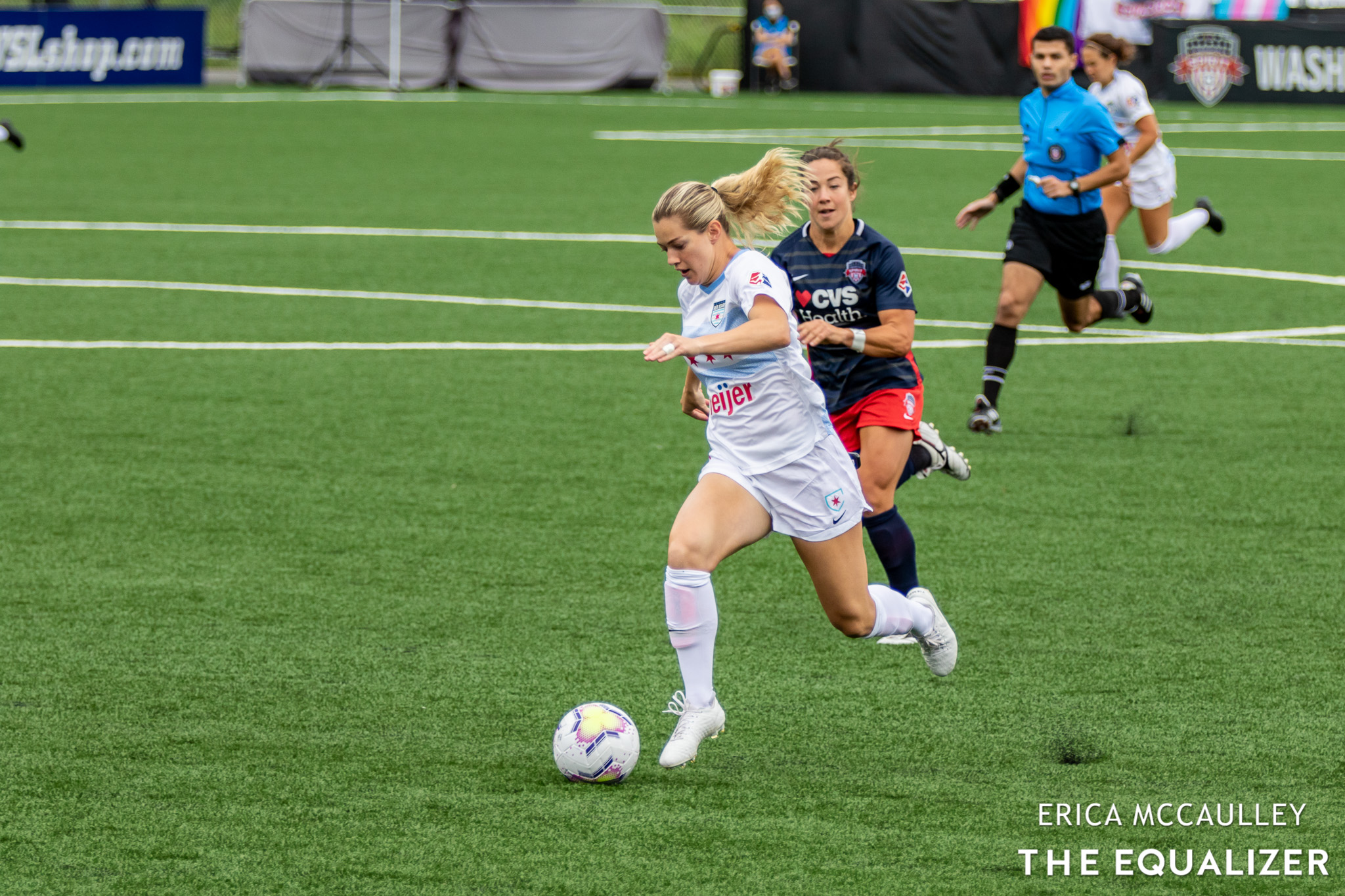 It was a busy night of weather delays in the National Women’s Soccer League but all three matches were eventually played.

The Skinny: This match was always going to be difficult for the visiting Reign as it was announced earlier in the day that head coach Farid Benstiti resigned, effective immediately, putting Sam Laity in charge as interim head coach. The team’s official statement implied the reasoning revolved around results and what is best for the team, but when asked for comment Laity requested to not say anything yet due to the personal nature of the situation. Hopefully we will hear more from the club in the coming days. Regardless, OL’s struggles remain the same as previous games, lack of finishing. Houston played well defensively and didn’t allow the Reign many chances but the chances they had were strong ones that should have been put away. The Dash on the other hand converted their only two shots on target, coming in the second half. The home team only had 40% of the possession and did not control as much of the game but Jane Campbell once again stepped up in net, making four crucial saves. One in particular was right before Houston scored the first goal, providing critical momentum for her side.

One Key Moment: It was only a month ago that Jasmyne Spencer moved to Houston from the Reign to find more playing time. And in her first start for the club she showed how dangerous she is, and how important she could be heading into the Olympic period. Not only did Spencer make a great run in behind the defense to calmly slot the game winner past Sarah Bouhaddi, but she wreaked havoc on the Reign defense from the wing. It was her intelligence and speed that earned Celia a 17’ yellow card as she easily rounded the defender, forcing her former teammate to pull her down and earning Houston a set piece that nearly resulted in an opening goal. You could see from the celebration just how much the goal meant to her and her new teammates, a sign of exciting things to come.

Inside the Game: OL Reign continue to struggle on both sides of the ball. In the first half there were several defensive errors that luckily went unpunished but marking on set pieces as well as clearances have not been good enough, from everyone. Speaking to Sam Laity and Lauren Barnes after the game, there is great excitement about this young backline and their potential but also an understanding that they will make mistakes. What will make the difference is what, and how quickly, they learn from them. In the case of Sam Hiatt and Alanna Cook specifically, they got their first real game and start with the team just a couple games ago and it was a conscious decision to try and build that relationship now so growing pains are to be expected. But offensively as well, the ball just will not go in the back of the net. The chances are being created but even with all the international talent they have on the field things aren’t quite clicking and goals are being squandered because of it.

The Skinny: After a three and a half hour weather delay, Gotham and Kansas City kicked off at Red Bull Arena for Pride Night. The home team would take the lead thirty minutes in thanks to Ifeoma Onumonu. Onumonu received the ball from Nahomi Kawasumi on top of the 18, turned brilliantly, and perfectly placed her curling shot low into the corner. Gotham had the majority of the possession over the course of 90 minutes and ideally should’ve put the game away with another goal, like they did to the Reign in their last match, but they were unable. Two very unfortunate injury substitutions were forced in this match. Darian Jenkins was the earliest sub as she had to come out just 11 minutes into the match but perhaps more detrimental was the injury to keeper DiDi Haracic at the end of the first half. Haracic has been a very strong backup to Kailen Sheridan (away for Olympic duty with Canada) but after taking a ball to the face she was unable to continue. Mandy McGlynn replaced her to start the second half, and even though head coach Freya Coombe has said she is very impressive in practice, it is never ideal to have to swap goalkeepers in a close match.

Gotham didn’t put the game away and in the end Kansas City were able to get back in it. The visitors tried to unbalance Gotham with a high press and it worked. Mariana Larroquette, only five minutes after being subbed on, pounced on a weak back pass, poked it forward for herself, and finished with a long distance bang over McGlynn. It was a terrific dipping strike that the substitute keeper had little chance at. Gotham didn’t stop pushing and had a chance deep in stoppage time to steal all the points but Nicole Barnhart reminded everyone why she has been in this league for so long. Brianna Pinto headed down a cross in the box towards Allie Long but Barnhart bravely came out to prevent the shot and then got up off the ground to magnificently dive backwards and tip Sodam Lee’s strike just over the crossbar to preserve the point for Kansas City. This is a good result for KC on the road, even though they are still looking for their first win of the season, substitutes able to come on and score a needed equalizer is a good sign for the struggling side.

One Key Moment: Individual brilliance and effort from Larroquette. Nothing else needs to be said.

Inside the Game: Eleven minutes into the match, Allie Long became just the 5th player in league history to play more than 12,000 minutes. She has been a longstanding fixture in the NWSL but her move back home to New York(/New Jersey) seems to have her back in top form. Long has been excellent in the midfield, adding important calmness and ball winning ability. She is crucial in the build up but also defensively. Gotham still have the lowest goals-conceded-per-game average of any team in the league this season (0.42) and the addition of Long has been a contributing factor.

The Skinny: The Chicago Red Stars spoiled Segra Field’s 2021 debut with a 1-0 victory over the Washington Spirit on Friday night in Leesburg, Virginia. The goal, in the 33rd minute, went on the books as an own goal against Julia Roddar. Mallory Pugh drove a corner kick to the far post and Kayla Sharples redirected it on frame. Spirit keeper Aubrey Bledsoe saved it with her head, and it ricocheted off Roddar’s face and in. Sharples followed up by booting it to the back of the net but it was already in for the hard luck own goal. It looked like the Red Stars had doubled up in the second half but Kealia Watt’s blast off the underside of the crossbar was ruled to not have crossed the goal line. Meanwhile the Spirit were held to a single shot on goal despite possessing the ball for 63% of the match. That shot, by Trinity Rodman, was taken from outside the box and saved by Cassie Miller who produced a clean sheet in her first regular season appearance.

One Key Moment: Just before the Red Stars goal, Mallory Pugh lofted a far-post cross that looked like it was about to float harmlessly wide.  Possibly seeing Watt stalking that back post, Bledsoe went up and swatted at it, knocking the ball out for a corner kick. It was that corner kick – by Pugh – that led to the only goal of the evening.

Inside the Game: The Spirit came close to their stated goal of completing 600 passes, but too few of them made an impact on the match. The Red Stars did not press the Spirit back line but dominated the midfield, rarely if at all giving any Spirit attackers room to operate. Often when Spirit players got on the ball a flurry of Red Stars surrounded them. First touches were often backwards, even in the final third. The win was the first for the Red Stars after two straight losses, and it was similar – though differently executed – than their most recent win when they throttled the Courage 1-0, also limiting them to one shot on goal (on 56% possession.)