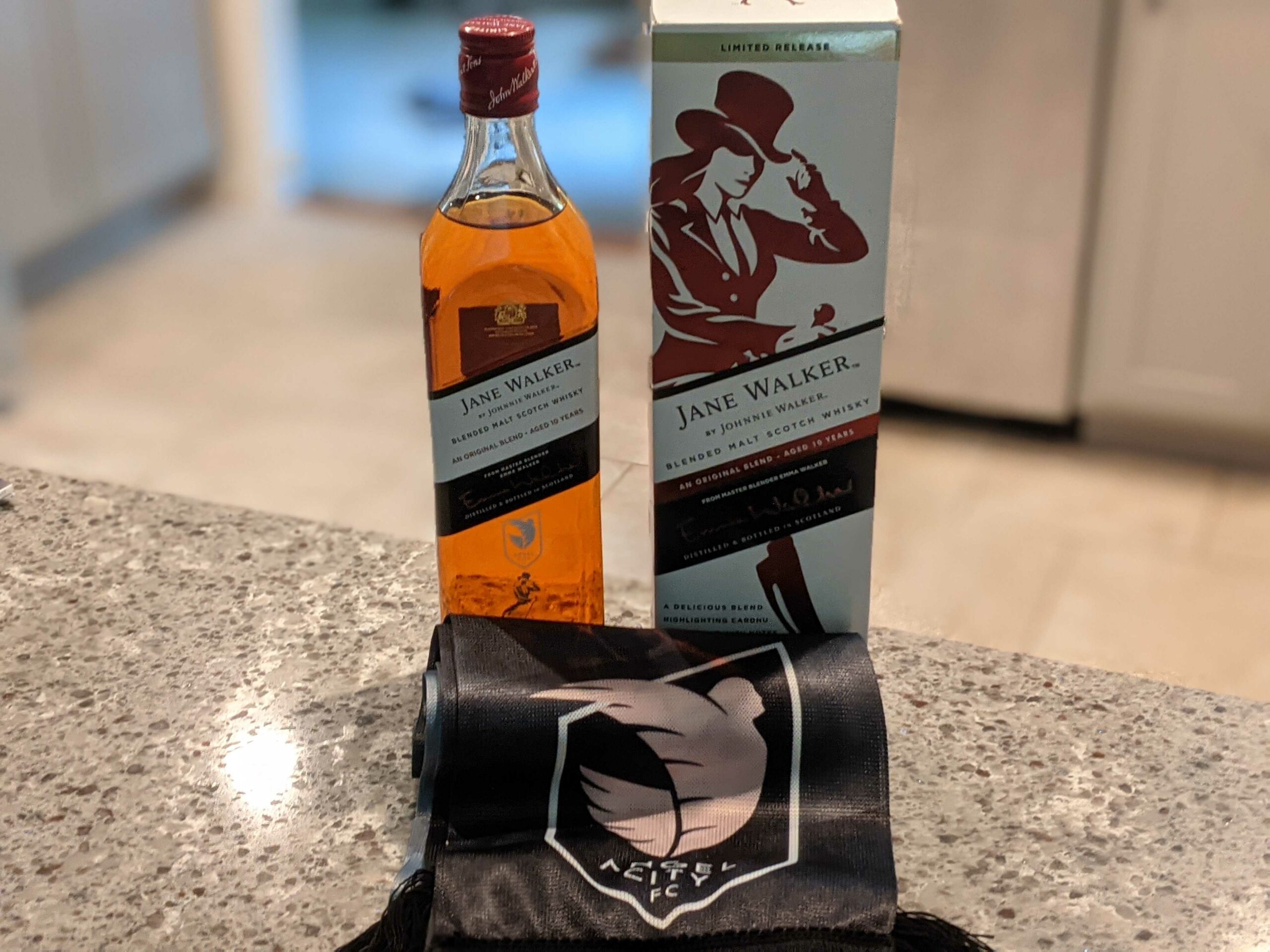 In a past life, I had a gig as a whiskey reviewer, so when Angel City FC announced their official spirits partner, the special edition Johnnie Walker bottling called Jane Walker, I knew I had to give it a try. The Jane Walker brand aligns pretty closely with what ACFC is doing. In an industry dominated by men, it’s the brainchild of Diageo master blender Emma Walker (no relation to the real John Walker), its slogan is “For women breaking boundaries,” and just as women’s sports teams and leagues are wont to do, it’s got a picture of a woman on the label. Its inspiration is said to be Emma Cumming, the onetime proprietor of the Cardhu distillery, whose whisky makes up a significant portion of all Johnnie Walker blends.

I was provided a review sample of Jane Walker, and my assessment is: it’s good! Even more than other Johnnie Walker labels, this is a very approachable scotch which I imagine would be enjoyable even for die-hard bourbon drinkers. Alongside a light bready maltiness, I get notes of orange peel, toffee, and chocolate on the nose, and a similar profile on the palate, together with a vanilla custard-y note. It’s very likable and easy to sip.

Now for the serious business: if all the other teams in the National Women’s Soccer League had an official spirit, what would they be? I gave this some real thought and even consulted with a few outside experts (read: The Equalizer’s Claire Watkins and Black and Red United writer Jason Anderson). The official results are below. Teams, take note for sponsorship opportunities:

King County is a small, impeccably branded distillery in Brooklyn that punches well above its weight. Commercially made “moonshine” is an unaged whiskey, usually made with a high percentage of corn, that puts a classy spin on what was thought of for decades as a harsh, unpleasant drink only enjoyed by the strongest-stomached drinkers. It’s a make-do-with-what-you’ve-got frontier spirit enjoying a refreshed reputation thanks to big-city hipsters.

Like its cousin, the negroni, a boulevardier — made with whiskey, Campari, and sweet vermouth — is a decidedly acquired taste. It’s strong. It’s bitter. Make it with rye whiskey instead of bourbon to add a spicy edge. Despite the complexity, fans swear by it, and with both rye whiskey and challenging cocktails generally growing in popularity, word is getting out.

A significant number of whiskeys and other spirits sold in the U.S. are made in the same place: Midwest Grain Products, or MGP, a mega-distillery in Lawrenceburg, Indiana. The company produces huge amounts of whiskey, vodka, and grain spirits, which it sells in bulk to distillers and bottlers across the country, who slap their own branding on it, sometimes after a little additional aging or a handful of botanicals. Neutral grain spirit is a high-proof, flavorless booze that can be made from any number of ingredients.

This was an easy pick, or maybe just a lazy one. Jim Beam is a classic Kentucky bourbon, made not far from Louisville; it’s not the best bourbon on the market, but it’s a perfectly good addition to a party.

Likely the most heavily peated scotch ever made — the malt it was distilled from clocked in at 309 ppm, or phenols per million, which is something like recording 60 goals and 400+ shots in a season — this is a whisky with no chill. It does one thing, and it does more of it than anyone else. Despite the intensity, it’s apparently (I’ve never had it) very good.

Though the Woodford Reserve label itself is relatively young, this lineup of American whiskeys is produced by Brown-Forman, a Kentucky Distillery with a wide reach and deep roots. Woodford Reserve Baccarat Edition is a super-high-end bottling (though it seems much of the price comes from the special crystal decanter it’s sold in) consisting of Woodford Reserve bourbon aged in barrels that once held French cognac. It’s basically the same classically American whiskey we’ve come to know and love, but in a fancy French wrapper.

Party-girl reputation aside, Malibu sounds good on paper. Rum and coconut are a classic combination — what’s not to like? The hangover, though, is brutal.

Like the Portland Thorns, Pappy’s reputation precedes it. It’s a lineup of bourbons ranging from 13 to 25 years old — unusually old for American whiskey — all of which are widely held to be among the best bourbons on the market. However, while its retail prices are in line with other top-shelf whiskeys, the white-hot resale market is perhaps the best known fact about Pappy. Bottles routinely sell for several thousand dollars. The hype, frankly, is a little annoying, but at the end of the day, it’s also a dang good whiskey.

Blood Oath, a line of limited-run bourbons blended from various sources and all sold in fancy wooden boxes and labeled with fancy embossed gold lettering, wants you to know it’s good. The marketing around it has a distinctly ambitious tone. And from what I know — I reviewed one release a few years ago — it is pretty good stuff. But does it live up to its own hype? Not really (not yet, anyway).