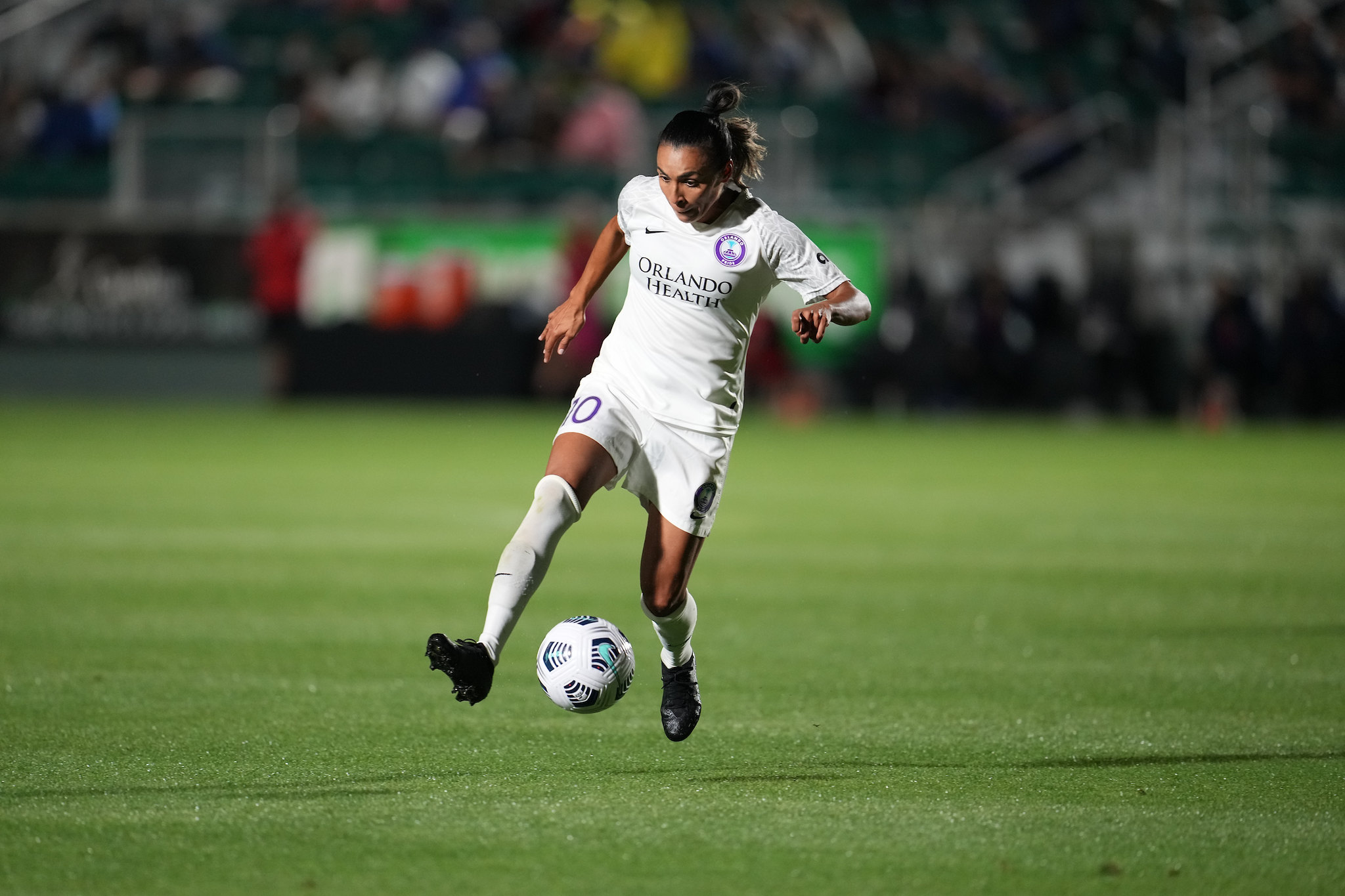 The Orlando Pride had their flight delayed multiple times ahead of their match against Kansas City. However, the plane landed just in time for Orlando to earn a 3-1 victory over Kansas City. Later in the day, North Carolina defeated Louisville at home thanks to Lynn Williams’ brace. Here’s what went down on Wednesday night (and day) in NWSL competition.

The Skinny: The Orlando Pride aren’t perfect, but they are unbeaten, and the only team in the NWSL to have that right. The offense put on a clinic at Legends Field in Kansas City. After an offside call on Amy Rodriguez that negated a goal, and a couple more scares from the Kansas City offense, the Orlando Pride got rolling after going down one goal in first-half stoppage time (which was 11 minutes long). Mariana Larroquette struck first at home, with the assist coming from Portuguese international Jessica Silva. However, Orlando replied immediately with a goal from Sydney Leroux, which looked to bounce off the foot of Rachel Corsie and past Abby Smith.

Orlando rolled in the second half. Leroux got her second of the match, slicing through Kansas City defenders and letting off at a shot at the top of the box. Her curling shot went past Smith for a second Pride goal. Then, to put the cherry on top for Orlando, Marta scored almost directly at the half-way mark of the pitch, chipping Smith who came off her line.

The Pride now hold a record of 4-3-0 and lead the NWSL table with 15 points. A few internationals will be packing their bags and heading off to the Olympics, including Alex Morgan (U.S.), Marta (Brazil), Ali Riley (New Zealand) and Erin McLeod, who was named an alternate for Canada.

As for Kansas City, the team sits at the bottom of the table with a 0-2-5 record, still looking for their first win in regular-season action.

One Key Moment: Sydney Leroux’s goal was a turning point for the Pride, as Kansas City was getting good shots off at McLeod and making good runs at the goalkeeper. When Leroux smashed her goal past Smith, it seemed like Orlando was going to edge out the three points. Then, with Marta’s finale at half-field, it was solidified that the Pride would head back to Florida with three points in tow. Leroux’s goal showed off her power and added to her already impressive 2021 campaign.

Inside the Game: Kansas City isn’t quite an expansion team, so they don’t have as much leeway that Racing Louisville will have. Kansas City came into the league with a full roster already, acquiring the Utah Royals FC players. However, it hasn’t quite clicked for Kansas City. There aren’t too many players leaving for the Olympics, and seeing Larroquette score is a positive, but Kansas City needs more productivity up front, especially from Portuguese striker Silva.

As for the Pride, the losses to the Olympics are going to be big, especially when concerning Marta. However, the team will keep Ali Krieger, Ashlyn Harris and Taylor Kornieck in town, and Kornieck has blossomed brilliantly in the league. Marc Skinner will have to move some pieces around, but all the Olympic losses aren’t going to make him lose too much sleep.

The Skinny: On Racing Louisville’s Pride Night, the visiting Courage absolutely dominated the home team. It is worth noting up top that both teams heavily rotated their rosters in this one week that sees them play three games. Lynn Williams in particular had a stellar night, scoring both goals and putting in great defensive work. On a night when North Carolina generated nineteen shots and eight on target, with 63% possession, Racing were lucky to only lose by two goals. Goalkeeper Michelle Betos continues to be crucial for the expansion side, making big saves and keeping the scoreline small. Williams scored her two goals in five minutes, first with great 1v1 attacking and second with a well timed header off a corner kick, on which Racing failed to mark her at all.

Even though the Courage dominated, this was a game of two different halves. In the first half Louisville could not find their way out of of their own defensive third as the opposing midfield suffocated any forward passes. Denise O’Sullivan and Sam Mewis in particular broke up any attempted play through the midfield, forcing Louisville into long balls that bypassed the midfield but were easily cleaned up by the Courage backline. In the second half, Williams had a couple strong chances to start off but the Courage started to uncharacteristically wane offensively. Even though Louisville’s subbed brought good energy the team as a unit wasn’t playing well enough. The Courage subs locked it down and recorded a promising clean sheet.

One Key Moment: After only being named as an alternate on the U.S. Olympic Roster this morning, Lynn Wiliams came out and had a fantastic game. Maybe she could have finished more chances but she also did score two goals and the only ones in this match. Her go-ahead goal deserves to be moment of the match because it was a fantastic finish as she cut against her defender and rocketed her shot perfectly into the upper 90, out of Betos’ reach.

Inside the Game: The substitutes in this game made a big difference and also showed more focus on defense rather than exhausting constant attack for North Carolina. With 30 minutes still to play both teams started making lots of substitutions. Racing’s subs Ebony Salmon, Yuki Nagasato, and Emily Fox, brought a lot of energy for their team but North Carolina went the other direction and brought on defensive minded subs in Havana Solaun, Cari Roccaro and Meredith Speck. The Courage subs were not focused on offense, even when they could’ve quickly hit on the counter, they chose to play it around and keep possession. This isn’t how we are necessarily used to seeing them play but the passing accuracy and ability to maintain that clean sheet with possession should make Paul Riley happy. Even though Louisville were able to have possession higher up the pitch than before, it was mostly in the middle third, they didn’t create any really strong goal scoring chances, and their passing accuracy was too low. Overall, it wasn’t a great performance by Louisville in this midweek game, even though there is certainly some exciting individual talent.