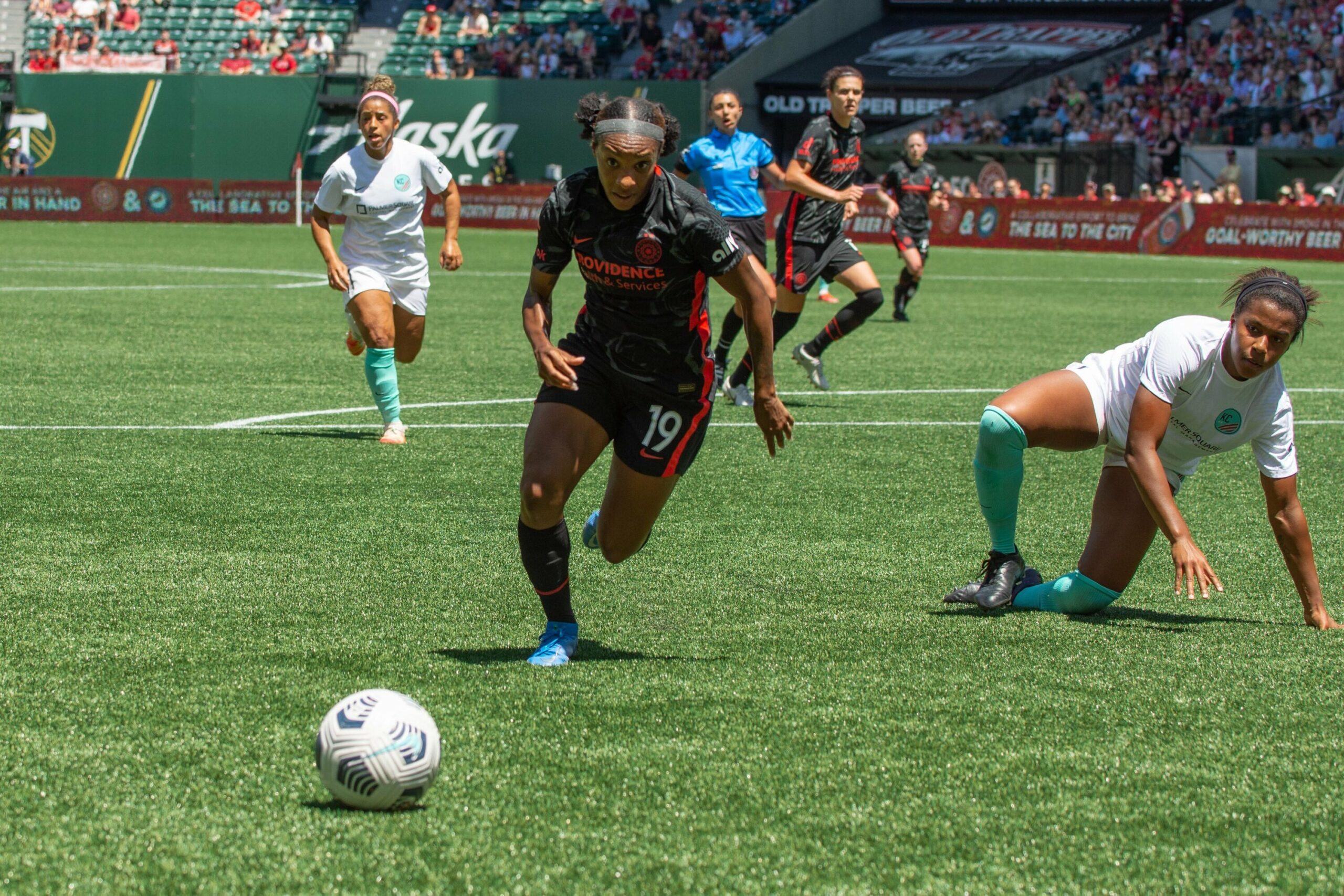 The Skinny: In the second nationally televised NWSL match of the weekend, the Portland Thorns defeated Kansas City 1-0 on Sunday afternoon at Providence Park. Portland came out flying, and earned a penalty kick in the 13th minute when Kansas City’s Elizabeth Ball was called for a handball. But Kansas City keeper Abby Smith guessed correctly, and got down to her right in time to deny Thorns captain Christine Sinclair. But the momentum stayed with Portland, as Kansas City had difficulty getting out of their own half for much of the first 45. And the pressure paid off, as Portland found their breakthrough in first half stoppage time. Simone Charley beat Abby Smith to a ball from Crystal Dunn, and buried it for the lead.

Portland’s dominance continued into the second half. Although the chances were there – including shots from Sophia Smith and Sinclair that required big saves from Abby Smith – the home team weren’t able to find a second. The later the match went on, the more Kansas City were let into it. They had two chances to equalize late, through an Amy Rodriguez shot in the 81st minute, and a last ditch attempt by Michelle Maemone in stoppage time, but Adrianna Franch handled both to preserve the shutout.

One Key Moment: You can certainly say that the dead bounce off the turf was a factor in Portland’s goal – but what was Abby Smith doing here? The keeper – who otherwise had a fantastic game, keeping her team in the match through attack after attack from their opponents – was far out of her goal and wasn’t able to clear the long ball like she hoped. On the flip side, the pass from Dunn and run from Charley were sublime. Dunn’s awareness and Charley’s first touch deserve a second watch:

Inside the Game: Kansas City’s scoring woes continue. Nothing to show on the scoreboard on Sunday means their drought has now extended to four matches without a goal. Just as concerning was their total lack of chances created in the first half, and their inability at times to keep possession after winning the ball back from Portland. They did get a few good looks on goal near the end of the match, but it was too little too late. As for the home team, despite the three points, I’m not so sure Thorns coach Mark Parsons will walk away from this one with a smile on his face. His team had chance after chance to definitively put the game away, but without an insurance goal, they had to sweat out the late chances from Rodriguez and Maemone.

The Skinny: Rejoice, Racing Louisville fans, over the new addition of Ebony Salmon. The 20-year-old English forward made her Racing Louisville debut during Sunday’s 1-0 victory over the Houston Dash. With plenty of internationals back from camp and a slew of matches across the globe, both sides were bulked up and ready to roll. Salmon was the story of the match, coming on in the 71st minute and then scoring only seconds later, off an assist from Savannah McCaskill. The British international will fit in just fine in the NWSL if Sunday’s match showed anything.

Jane Campbell, returning from international duty with the United States, made four saves while Michelle Betos kept a clean sheet — and kept busy — with seven saves. Betos made two saves each on Shea Groom and Veronica Latsko, who led the attack for a majority of them match for the Dash.

The win is Louisville’s second in NWSL action.

One Key Moment: It’s hard to argue against Salmon’s goal. The 2001-born player scored literally seconds after stepping on the pitch. You have to believe that Christy Holly and company are going to be thrilled about their new addition’s immediate impact.

Inside the Game: It was the first Racing Louisville outing with a full capacity crowd at Lynn Family Stadium. The fans saw some new faces, including Gemma Bonner, who joined the team from Manchester City. And, for the first time all season, Addisyn Merrick was available for selection. Racing Louisville is getting healthy again and now Holly has a large crop of players to pick from. It doesn’t seem like Racing is going to have a lot of missing players for the Olympics. In fact, most of Racing’s roster is staying intact. This team could be dangerous in the summer and Salmon could very well be a breakout player.

The Skinny: In Orlando Pride’s meaningful Mission Rainbow match, honoring and paying tribute to the victims of the Pulse nightclub shooting while celebrating Pride Month, the points were shared with Gotham. Orlando seemed to dominate a lot of the first half, creating several close chances that they either put just high or wide. The Pride would regret not putting away those chances when Gotham took the lead just before halftime. It was Ifeoma Onumonu, who had subbed in only a couple minutes prior, who was able to hold up the ball against defensive pressure, turn, and release Caprice Dydasco on the wing. It was Dydasco’s first ever NWSL goal and she looked shocked by her attempted cross going into the net but it killed Orlando’s first half momentum.

As the second half started the home team started to slack off, not looking nearly as dangerous as they had the previous half. They got sloppy, they weren’t connecting passes and they gave away unnecessary fouls. Meanwhile Gotham dominated possession in the midfield, clearly frustrating Orlando. But with ten minutes left Marta started to get really fired up, urging her team on she won the ball in midfield and pushed it out to Courtney Petersen. Petersen’s goal also seemed intended as a cross but it found the far top corner in the 90th minute to salvage a point for the Pride, also extending their unbeaten streak to six.

One Key Moment: The goals in this match, though probably unintentional, were impressive. However, the biggest moment in this match for the future of the NWSL, and probably the U.S. Women’s National Team, was the professional debut of Brianna Pinto, the #3 draft pick out of UNC. She may have only played about twenty minutes, but in that short time she showed so much intelligence on the ball. It’s Pinto’s awareness on the ball that is really impressive. Everytime she received the ball you could see her look for a teammate and then make a smart, clean pass to keep possession. She completed all her passes and wasn’t afraid to match the physicality of the game. Gotham fans should be really excited about her future.

Inside the Game: Both teams in this match were well organized defensively and got numbers back to prevent any super easy chances. This also meant that a lot of the match was played in the middle of the field where Allie Long, Jennifer Cudjoe, and So-dam Lee were able to control a lot. Long and Cudjoe as defensive midfielders were able to break up a lot of Orlando’s play and prevent them from moving the ball around midfield. The Pride backline was given time and space to move it around but past that they were forced into long balls. The South Korean international Lee had a particularly strong match receiving the ball from her defensive mid pairing and connecting with players up front, showing off some exciting skill. Gotham didn’t create as many chances as the Pride but they controlled 58% of the possession and didn’t allow Orlando the play how they wanted.

The Reign remain stuck in neutral
Kassouf: Appreciating the moment