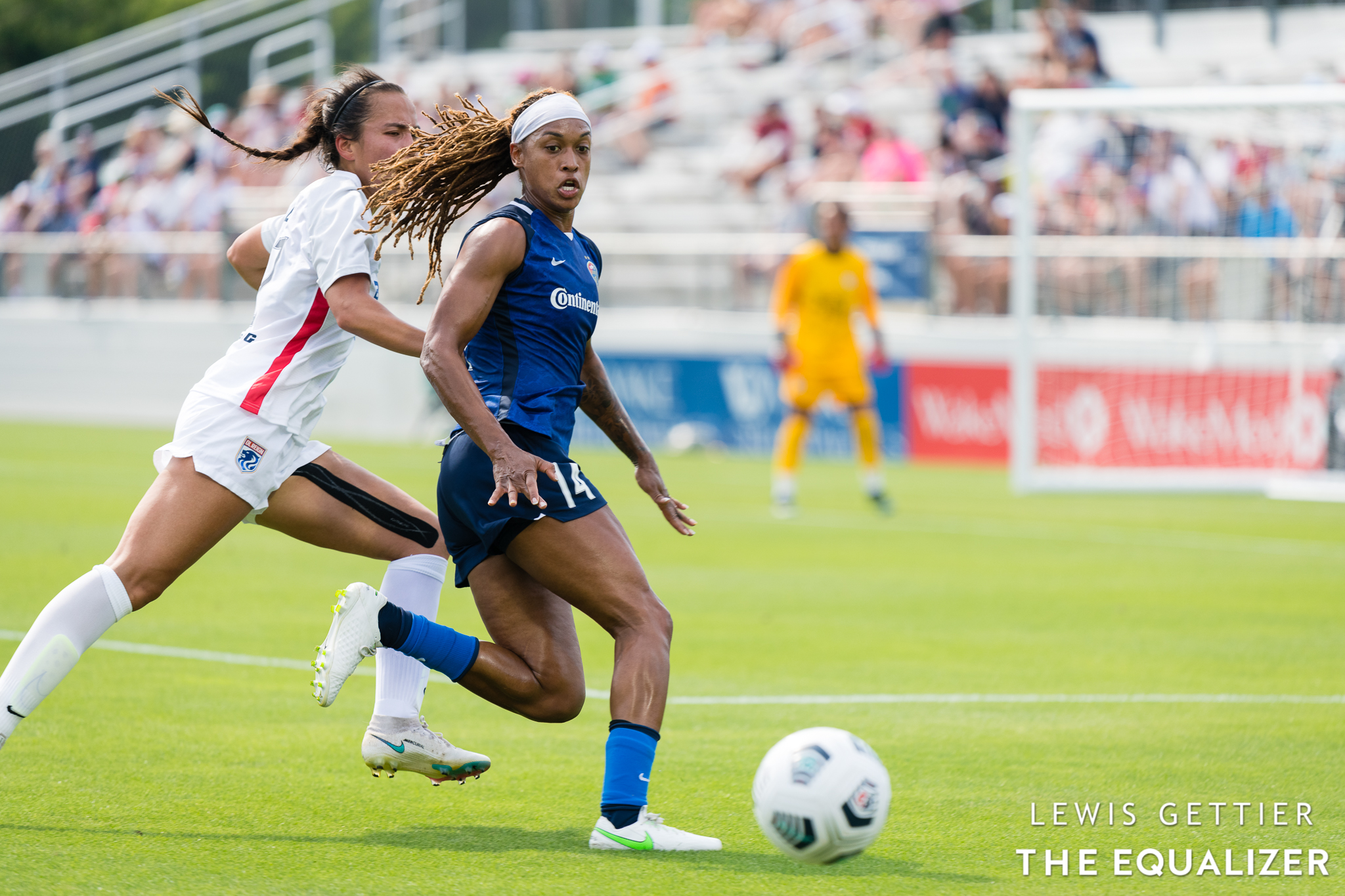 The Skinny: On Saturday night in Bridgeview, Illinois, the Chicago Red Stars and Washington Spirit played to a 1-1 draw. Though neither team had sustained pressure on goal in the first half, Chicago had the better of the chances. In the ninth minute, the Spirit couldn’t clear the ball in the box, and Rachel Hill found Mallory Pugh, whose shot sailed just to the left of goal.

The second half was a much more lively affair, as both teams had significant looks on goal after the restart. Washington finally threatened in the 60th minute, when Ashley Sanchez forced a full stretch save out of Alyssa Naeher. Chicago, and more specifically Pugh, had a number of chances in the second 45, including when Pugh ran at defenders in the 83rd minute and connected her shot with the post. But it was Washington that struck first, and against the run of play too. Trinity Rodman got in behind the Red Stars’ back line, and slotted her shot perfectly through the legs of Naeher. Just as the visitors looked to be headed for three points, Washington’s Sam Staab was called for a handball in her own penalty box in stoppage time, and Morgan Gautrat stepped up and converted the penalty for Chicago to earn the draw.

One key moment: Though the handball and penalty kick supplied the late drama in this one, it was Rodman’s goal that stood out. A beautiful ball over the top by Andi Sullivan set-up this goal, and Rodman’s energy and technique was on full display with the finish. Beating the entire Chicago back line handily, Rodman controlled the ball well and chose to slot the ball through the legs of the waiting Naeher. This goal earns maximum style points:

Inside the game: It was a tale of two halves on Saturday night, as both teams largely failed to connect in the first half, but put up some dangerous chances in the second. And although it was the Red Stars that dominated for most of the final 45, they’re lucky to be walking away with a point. 21 shots, but only 4 on target gives you an indication of the kind of frustrating night the Red Stars had, as they were missing some quality finishing all match. Though they had to rely on a late penalty to score, the good news for Chicago is that Pugh specifically is looking more and more dangerous with each match. She managed seven shots on the night.

On the flip side, Washington will walk away disappointed in this one, as they’ve now given up a lead and settled for a draw three times in six games this season. They’ll also leave Illinois with concern for their leading scorer Ashley Hatch, who was subbed off in the 35th minute after appearing to hit her head in a collision earlier in the half.

The Skinny: On a very hot afternoon in Cary, North Carolina, the Courage got the 2-1 win over OL Reign in front of their home fans. Both teams came into this match far lower on the table than they are accustomed to being, but there was a lot of talk about the Reign specifically coming into this one, due to the recent arrivals of internationals Sarah Bouhaddi, Dzsenifer Marozsán, and Alana Cook, who all started.

Normally, it is the North Carolina offense that dominates games, but they struggled in the final third, not connecting as well as we are used to, with both teams close to equal in shots and shots on goal. Jess McDonald scored the opening goal on a beautiful ball from outside back Merritt Mathias and a large error from Bouhaddi in her first appearance for the club. The French keeper came out for the cross and completely missed it, leaving McDonald an empty net she wasn’t going to miss. Their second goal was very intelligent play between Sam Mewis and Lynn Williams, but questions remain about Bouhaddi’s decision-making and how that will play out in the NWSL. Jess Fishlock would pull one back late with a spectacular chip, but it wasn’t enough.

Possession stats were technically in favor of the Reign but they didn’t do enough with it. North Carolina was able to find a lot of space on the break, often finding Debinha between the opposition back line and defensive midfielders. The Reign were trying pass the ball around the midfield, and when it worked it was a beautiful passing game, but more often than not they were dispossessed after several passes that didn’t advance the ball far up the pitch.

One Key Moment: Fresh off international duty with the United States women’s national team, Mewis and Williams combined for the go-ahead goal in this one. Williams played the full match, contributing immensely on both sides of the ball, while Mewis came off the bench 20 minutes into the second half. It was intelligent play between the two longtime friends to create space and then calmly finish near post. It was William’s 26th all-time assist, making her the top all-time NWSL assist leader. More importantly, it was another solid performance from the player making one last push towards the Olympic roster. Her fitness and speed is near unmatched, and some may point to the easy sitters she missed, but she reminded in the last Summer Series match that she can score. On Saturday, Williams again showed how well she can provide and create.

Inside the Game: Substitutes made a big impact for the visitors, bringing some desperately needed energy and offensive aggression. They were able to pull a goal back thanks to Fishlock, who usually is a starter. Her ability to win balls in the midfield and drive forward like a bulldozer is incredible, and in this case it gave her side a goal as she stripped Denise O’Sullivan and chipped Casey Murphy from a long way out.

The Reign have a lot of talented players who can play great passing football, but a combination of the heat and a lot of new players still getting to know each other, seemed to prevent them from playing at their best against a really strong Courage team. Regardless of the goals scored against them, there is reason to be excited about their back line, with Celia returning from injury, Lauren Barnes being a veteran rock, and Cook and Sam Hiatt having strong performances in their first regular-season starts at center back.