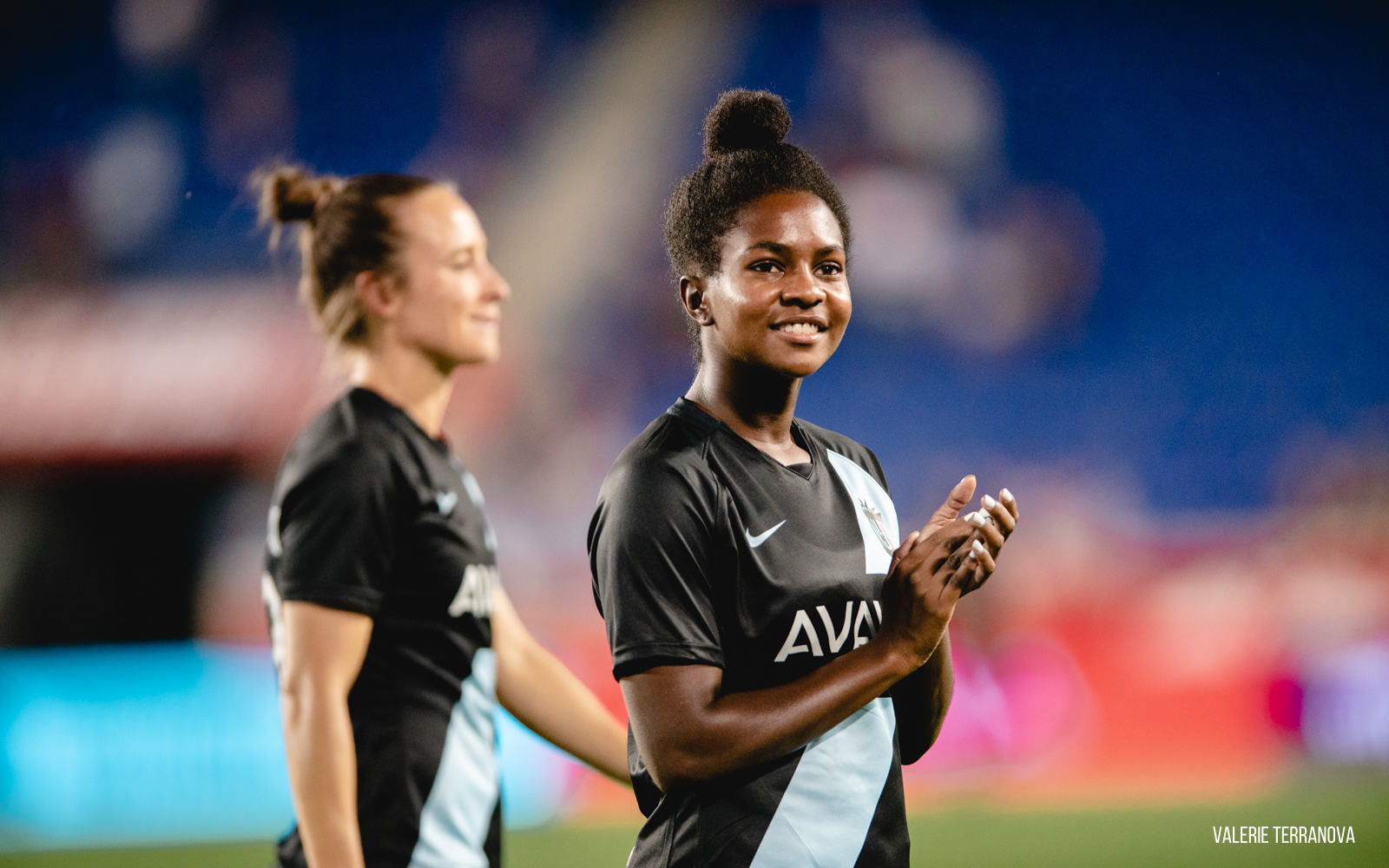 On January 13, all 10 National Women’s Soccer League teams met via videoconference to select the rights to 40 eligible college players. The 2021 NWSL Draft was different than past years in more ways than one, with the NCAA offering the players an extra year of eligibility due to the pandemic, meaning clubs could hold draftee’s rights through the start of the 2022 season. Now, five months removed from that night, let’s take a look at each team’s picks and how they did this past NCAA season, who joined or will soon join the NWSL, and who plans to play through the fall collegiate season.

Coming into their first season, the expansion side needed some players to make an immediate impact, and their first-round picks have done just that. Both Emily Fox (#1) and Emina Ekic (#5) joined the team at the start of the Challenge Cup, and have since played significant minutes, with Ekic helping her side to their first regular-season victory. Taylor Otto (#11) joined the team at the same time. Racing’s other three picks plan to play NCAA soccer in the fall. Parker Goins (#21) helped lead her Arkansas Razorbacks to an SEC Championship and was named a third-team All-American. She started in all 16 matches, scoring eight goals and providing three assists. Emily Smith (#31) proved crucial to the Cal Bears’ back line; she missed a few games to injury but still played 11 full matches. Kirsten Davis (#13) played almost every minute for Texas Tech, netting 4 goals and chipping in two assists.

The Red Stars won’t see all but one of their draft picks until 2022. Alissa Gorzak (#35) appeared in 11 fall matches for the Virginia Cavaliers but elected to forgo her remaining eligibility and joined Chicago for NWSL preseason. Gorzak did not earn a contract, though she could sign during the summer as a National Team Replacement (NTR) player. Madison Haley (#7) played just over half of Stanford’s matches as she was unable to play consistent minutes. Kelsey Turnbow (#18) was crucial to Santa Clara’s national championship-winning season. She was named the Most Outstanding Offensive College Cup Player after scoring the go-ahead goal in the semifinal and an unassisted equalizer to send the final into extra time — and then penalty kicks, of which she converted hers.

Turnbow could be huge for a Chicago side still looking for more offensive production, but she is expected to play with the Broncos through the fall while she finishes her masters degree. Unfortunately, Brianna Alger (#25) tore her ACL after only one spring match for Washington State University, and will likely be out through the fall. Channing Foster (#32) was named to the All-SEC First Team, appearing in 18 full matches for Ole Miss while scoring five goals.

The reigning regular-season champions, from 2019, only had three draft picks, and will not see any of them until 2022. Their highest pick, Canadian international Deanne Rose (#10), out of Florida, will be signing with a team in Europe, but has yet to announce where. Auburn defender Alyssa Malonson (#20) appeared in every match, logging 1,351 minutes. Vanderbilt’s first NWSL draftee, Myra Konte (#30), started and played in 12 matches, pitching in a couple goals from her spot on the back line. She was named SEC Tournament MVP in the fall but only played two spring matches.

The team in teal socks signed two drafted players coming into the season: Addie McCain (#17) of Texas A&M, and Canadian international Victoria Pickett (#15). Kansas City’s highest pick, Kiara “Kiki” Pickett (#4), finished up her spring season with Stanford and then signed with the club through 2023. Though she has not yet been able to appear in the NWSL due to injury, Kiara Pickett was named PAC-12 Defender of the Year, appearing in every match for the Cardinals. Lucy Parker (#16), an English international and UCLA defender, played limited minutes due to injury but plans to join KC now that the spring season is over.

Alex Loera (#36), one of the captains of the current NCAA champion Broncos, was named Most Outstanding Defensive College Cup Player, WCC Defensive Player of the Year and Second-Team All-American. She also won the Honda Award for Soccer, joining fellow Broncos Brandi Chastain, Aly Wagner, and Leslie Osborne on an exclusive list, but KC will have to wait to see her until 2022. Brookleynn Entz (#38), who played 13 matches for Kansas State University and led her team with seven goals scored, has also elected to use her remaining eligibility.

Almost all of Washington’s draft picks joined the Spirit at the start of the 2021 season. Trinity Rodman (#2) came in as a question mark because of her age and inexperience, but since her first Spirit appearance she has put in terrific performances and earned regular minutes. She is arguably one of the the most exciting players in the league right now. Tara McKeown (#8) recently signed a two-year contract with the Spirit after finishing up her spring season with USC. McKeown is another exciting, young, attacking talent. She was named to the all PAC-12 First Team as she scored eight goals and provided eight assists. Anna Heilferty (#19) signed from Boston University and has made several appearances. Both Jamaican goalkeeper Sydney Schneider (#29), from UNC-Wilmington, and Venezuelan attacker Mariana Speckmaier (#39), out of Clemson, signed for the D.C. club but have yet to appear. Schneider has continued to be called in by Jamaica.

Joelle Anderson (#26) scored three goals and provided matching assists at Pepperdine, where she plans to play in the fall before turning pro. Makamae Gomera-Stevens (#27) started and played 12 matches for Washington State, chipping in four goals and an assist. The talented midfielder signed a two-year contract with the Dash and made her debut off the bench over the weekend.

All of Gotham’s draftees elected to play with their school at least through spring. Brianna Pinto (#3) had such a fantastic season for the North Carolina Tar Heels, scoring 14 goals and adding five assists, that she was named a MAC Hermann Trophy Finalist. Pinto just signed a two-year contract with Gotham and recently joined the team. Taryn Torres (#23) helped the Virginia Cavaliers make it all the way to the College Cup but FSU beat them in a shootout. Tess Boade (#40) played nearly 1,500 minutes for Duke, scoring six goals and assisting three. Both Boade and Torres signed with the WPSL side, Gotham Reserves, which could indicate they intend to play through the fall season. But Cloud 9 has reason to be excited with another talented midfielder expected to join very soon. Delanie Sheehan (#33) earned First-Team All-American honors and was named a MAC Hermann Semifinalist for her performances with UCLA.

Orlando have yet to see any of their draft picks, but they will have some exciting talent for 2022. Mikayla Colohan (#14) had a fantastic season at BYU, with 11 goals and five assists in only 16 matches. She was named a First-Team All-American. As a team captain, Kerry Abello (#24) helped guide Penn State to the Big Ten regular-season championship. Kaylie Collins (#34) was strong in net for USC. In her 13 matches, she averaged 79% shots saved, including a six-game run of clean sheets. She has been with Orlando since the end of the spring season and on Friday signed as a NTR player, with Erin McLeod unavailable. The Pride’s highest pick of the draft, Viviana Villacorta (#9), will likely be unavailable through fall as she tore her ACL 44 minutes into UCLA’s first spring match.

Portland’s highest pick is expected to join soon, having finished her spring season with TCU. Yazmeen Ryan (#6) had a strong season in the middle of the park, netting seven goals and assisting six, on her way to the NCAA Elite Eight. Hannah Betfort (#37) left Wake Forest and joined the Thorns for preseason but did not sign at the time. Both Ryan and Betfort recently signed with the Thorns, three-year and one-year contracts, respectively (each with options). Sam Coffey (#12) had a phenomenal season for Penn State, providing 12 assists and six goals. MAC Hermann Trophy Semifinalist Amirah Ali (#22) scored seven goals for Rutgers, several of which were game-winners. Both Coffey and Ali plan to continue with their universities through the fall.

The Reign had only one pick, which they used on Jiména López (#28), the standout Texas A&M outside back. The Mexican international quickly signed with Spanish side SD Eibar through June 2022. However, Eibar is currently 13th in the 18-team Spanish top flight with only three matches left in the season, and she could still choose to come to the NWSL.