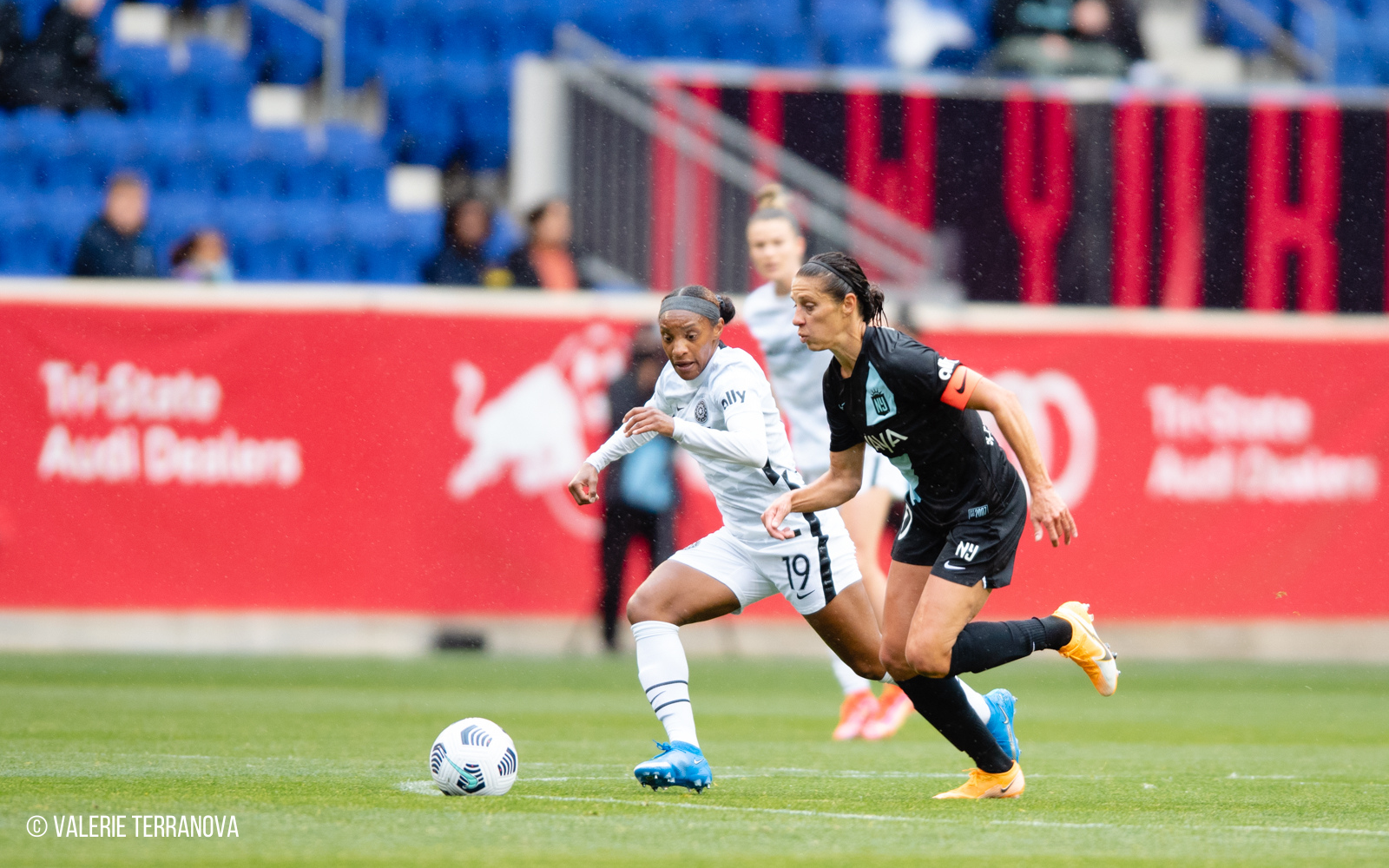 The Portland Thorns finished off a grueling, early-season road trip with a needed victory in New Jersey on Sunday. Crystal Dunn scored the only goal — her first in a Portland jersey — to lift the Thorns to a 1-0 victory over NJ/NY Gotham FC at Red Bull Arena. Here’s what happened on a Sunday with three National Women’s Soccer League games.

The Skinny: Portland earned a much needed three points to end a rare skid after losing to OL Reign at home last weekend and to the Orlando Pride on the road on Wednesday. Dunn’s stunning goal in the 52nd minute was the difference, but the Thorns could have put the game beyond doubt on several occasions. Sophia Smith missed an empty net six minutes after Dunn’s goal, following an error in possession from Gotham goalkeeper Kailen Sheridan.

Gotham was lucky not to concede, but didn’t lack opportunities on the other end. Carli Lloyd put her shot over the bar in the 60th minute after Midge Purce played her in behind, and Ifeoma Onumonu sent her close-range header over the bar on a cross from Purce 11 minutes later.

One Key Moment: Dunn’s goal speaks for itself.

Inside the Game: Purce started at right back on Sunday in an interesting tactical change from Gotham head coach Freya Coomb. Lloyd, Onumonu and Paige Monaghan started up top in the 4-3-3. Portland, playing a third game in eight days, rotated the lineup slightly, with Simone Charley starting in place of Morgan Weaver up top, Angela Salem sliding in for Raquel Rodriguez in midfield, and Emily Menges starting in place of Kelli Hubly.

Purce was active despite the regression to fullback following her strong start to 2021 up top. Her long run to set up Lloyd’s shot in the 60th minute was reminiscent of the the move she made to score a wonderful opening goal against the North Carolina Courage in the Challenge Cup last month. At the very least, the performance should be another positive for her in the eyes of United States coach Vlatko Andonovski, who will soon decide on his Olympic roster and would be using Purce as a reserve fullback.

Portland knocked on the door through Dunn, Horan and Smith, and Weaver added a spark off the bench on a rain-soaked and unseasonably cool day. The Thorns had the look of a good team with tired legs which was unlucky to not earn a more decisive result. Gotham, meanwhile, dodged multiple dicey moments, with Sheridan coming up with seven saves.

The Skinny: Orlando now sits alone at the top of the NWSL table, unbeaten through four games with 10 points. Just like everyone predicted, right? The Pride’s lone goal on Sunday was a controversial one. Marta was credited with the 16th-minute tally after Alex Morgan headed the ball toward goal on a corner kick. Kansas City goalkeeper Abby Smith swatted the ball off the line and, after some confusion, the referee declared a goal — a call made by the assistant referee positioned on the line. Camera angles were inconclusive.

Morgan missed an opportunity to score for a fourth straight game to start the season and ice the game. After earning a penalty kick, she sent her 66th-minute attempt off the post.

One Key Moment: The goal in question ultimately decided the result. Kansas City coach Huw Williams said after the match that he had not seen any conclusive replay, and respectfully stated that it was the assistant referee’s call to make. Reminder: The NWSL does not use goal-line technology or video review — even though many stadiums in the league, including Exploria Stadium in Orlando — are equipped for it.

Inside the Game: Kansas City is now the only team remaining in the NWSL without a win in the regular season, and Sunday’s performance did not offer much encouragement. With Kansas City playing a third game in a week, Williams rested Amy Rodriguez, the team’s only real goal-scoring threat to date. The visitors were woeful going forward; Kansas City failed to register a single shot on goal in the game.

Credit to Orlando’s defense, though. The Pride gave up 53 goals in 24 games in 2019, the worst defensive performance in league history. This year, young defenders Phoebe McClernon and Courtney Petersen have paired with veterans Ali Krieger and Ali Riley to form a much more formidable defense, as exhibited in victories over Portland and North Carolina over the past week. The Pride just registered a 9-point week and hit 10 points in four games. In 2019, it took 14 games to reach 11 points. Orlando will be hit particularly hard by absences in the Olympic stretch, but the Pride at full-strength look like contenders.

The Skinny: OL Reign and the Washington Spirit were tied on the table before Sunday night’s match. Washington earned their second win of the season off a chaotic corner kick piece, which was knocked in by Megan Rapinoe for an own goal. At first, the goal was credited to Sam Staab, until replay showed Rapinoe knocking the goal in past Karen Bardsley. The goalkeeper made headlines later in the match after going down with an injury late in the second half. Bardlsey was holding her hamstring and had to be helped off the pitch. In the 86th minute, Ella Dederick made her NWSL debut and prevented a second Washington goal.

One Key Moment: Aubrey Bledsoe made a fantastic save in the first half against Rapinoe. The U.S. women’s national team strike hit a curling shot toward the far post and Bledsoe stretched out to make the save. Rapinoe’s shot was superb but Bledsoe’s save was exceptional. It helped Washington preserve the clean sheet.

Inside the Game: Washington is now riding a two-game winning streak after a forgetful start to the Challenge Cup and the regular season. Washington compiled 12 shots with six on goal, giving Bardsley a workout in net. Washington will face off with red-hot Orlando Pride — who earned nine points in the last 10 days.

As for the Reign, their unbeaten streak — albeit, the Reign have played three games this season — has ended. The Reign also took six shots on goal, courtesy Angelina, Sofia Huerta, Bethany Balcer, Leah Pruitt and Rapinoe, all being saved by Bledsoe. The Reign will travel across the country to take on Gotham next weekend. Both teams are coming off a loss this weekend.